The champions of BBI were there in that process in 2010 and Raila played a crucial role.

• Involving everyone so that no-one feels left out is the sovereign remedy the BBI proposes.

• But in 2008 we had power sharing – the so-called national accord. Was it a success? 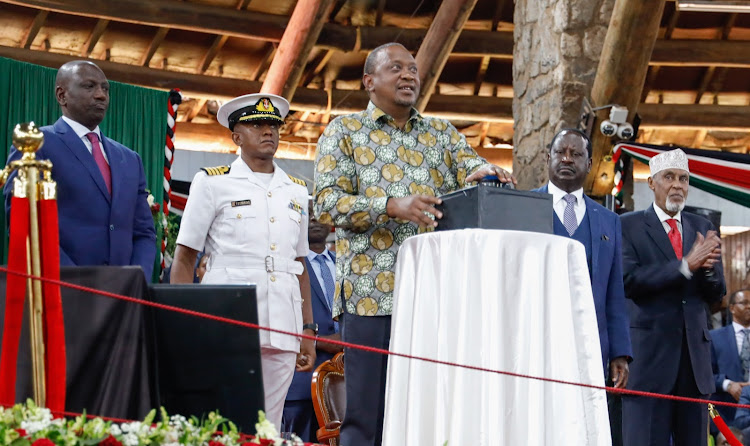 PUSHING THE BUTTON: President Uhuru Kenyatta flanked by Deputy President William Ruto and Raila Odinga press a button to launch of the Building Bridges Initiative Report at the Bomas of Kenya, Nairobi, on November 27, 2019.
Image: PSCU

[Jomo Kenyatta: We shall build a country where every citizen may develop his talents [not hers?] to the full, restricted only by the larger aim we have of building a fair society. There will be no privileges for any minority. Equally, we shall see that no member of any group undergoes discrimination or oppression at the hands of the majority. - May 27, 1963, after Kanu’s electoral victory].

Kenyans have not been well served by their political parties.

In fact, from honourable Jomo to his honourable son, Uhuru, they have been almost entirely preoccupied with their own interests, and on a minor scale, their political, ethnic compatriots.

For long periods, the country was ruled effectively by a one-party regime, by force or legislation.

This effectively meant that we did not have democratic systems. With the end of the Cold War, there was a renewed struggle for democracy.

But when the democratic constitution came, they were dominated by the traditional political parties — which were somewhat fluid, but always around what we might call the potential politicians.

Under successive constitutions, whatever their orientation, the State has been the source of their wealth.

Parties are required by law to observe certain principles to qualify for participation in elections.

The Constitution says that each of them must have a “national character” — meaning in terms of membership, a democratically elected governing institution.

They must also promote and uphold national unity, abide by the democratic principles of governance, promote and practice democracy through regular, fair and free elections within the party [my italics], respect the right of all persons to participate in the political process, including minorities and marginalised groups, and respect and promote human rights and fundamental freedoms, and gender equality and equity, the rule of law and respect other objects and principles of the Constitution.

Nor should parties engage in or encourage violence by intimidation of their members, supporters, or opponents.

They should not engage in bribery or other forms of corruption. Nor should they use public resources to promote their interests or those of its candidates in elections.

Yet our elections have become a trade in money, despite these attempts in the Constitution to elevate the basis of competing in the elections and its process.

The scheme under the Independence Constitution was that the State would constrain the politicians by fairly complex arrangements, including the Judiciary, and careful regulation of land.

However, once the British left, the politicians established their control.

Jomo Kenyatta, our first President, having abolished the parliamentary system—demanded and gathered a huge sum from the Exchequer.

His statement above becomes the travesty of politician-turned multi-millionaire. Parastatals, designed to allow decision-making on the basis of the public interest, even commercial factors, have actually enabled the President to play a critical role in large areas, economic and otherwise, of the state.

Institutions of the state and the people themselves lost control over politicians. Elections and politics became very much ethnic issues.

Nothing was as revealing of this as intense competition for elections, which became mainly ethnic matters, with even horrendous physical fights between ethnic supporters — no doubt promoted by ethnic leaders.

It was this sort of conflict between the Kikuyu and the Luo that prompted the Handshake and the BBI.

Ironically, BBI has aggravated the situation, as we see, instead of solving many problems through the Constitution, as Raila Odinga and Uhuru saw and committed themselves to (an issue on which his staff consulted me).

They went far enough to identity nine major social and ethnic problems that could have been resolved within the Constitution —  swore to do so.

But soon after, they came up with the extraordinary scheme of the BBI, expensive and as it turned out productive of further conflict.

The people indicated what they wanted in the 2010 Constitution. It was hardly necessary to go back to the people.

But the BBI is more consistent with the arrogance of politicians. I wonder if Uhuru and Raila see the consequences of moving to a Constitution in which the leaders of every ethnic group (in practice major five or so tribes) will dominate the country.

This is not the occasion to review in detail the failings of their proposal.

Here it is enough to remind ourselves of the enormous difficulties that the new constitutional system will generate — and the extreme difficulty of making work the proposed system of government with a multiplicity of senior posts.

They are taking away from the people the Constitution which they made and cherish even though our politicians never gave them the chance to become its beneficiaries.

WE HAVE BEEN THERE BEFORE

Involving everyone so that no-one feels left out is the sovereign remedy the BBI proposes.

But in 2008 we had a power-sharing – the so-called national accord.

Was it a success? A government that was divided into two parts. Such a disappointment that the people cheerfully accepted the abandoning of a parliamentary system in 2010 (if having a prime minister means that – we don’t want it). Even Raila doesn’t want nusu mkate now.

Don’t we have power-sharing now? Uhuru and Ruto essentially sold themselves to the Kenyan people in 2013 as the way to peace: let us both (and “our” people) in and we shan’t fight. The people elected them. Did you expect it to last?

Why not focus on how we can help the people to achieve what the objectives they have long wanted — even since Independence.

They had told the CKRC (Constitution of Kenya Review Commission) at the length of their wishes, perhaps hopes too.

Out of an extensive round of consultations with Kenyans throughout every part of Kenya, with a remarkably modest budget, we gathered a huge volume of ideas and wishes (available I hope in the Archives) and on that basis set out to draft the constitution — not merely listing people’s wishes, but also setting the framework and institutions for their achievement.

People wanted national unity, moving away from tribes (quite the opposite to what is really espoused by BBI whatever its promoters say), meaningful democracy, participation, human dignity, human rights, protection of the marginalised, and on the part of the government (listen politicians!) good governance, integrity, transparency and accountability and sustainable development.

Kenyans have realised little of these aspirations. I am sorry to say that the people are in fact worse off.

Why? Because politicians took over. Their agenda was different from that of the people, focusing on their own needs — which have required enormous sums of state money.

As we know, they have done little for the people, despite knowing well what they wanted and what the Constitution promises them.

The champions of BBI were there in that process and Raila played a crucial role. Has he now lost confidence in his great work? Uhuru did not pay much attention, and his ignorance of the Constitution may have persisted.

Ghai is a Constitutional law professor.