Why Uhuru has delayed appointment of Auditor General

• President Kenyatta was last year required to submit the nominee to the National Assembly for vetting after the Public Service Commission concluded the interviews.

• According to the Public Audit Act 2015, Kenyatta was required to pick one nominee and forward it to the National Assembly for vetting. 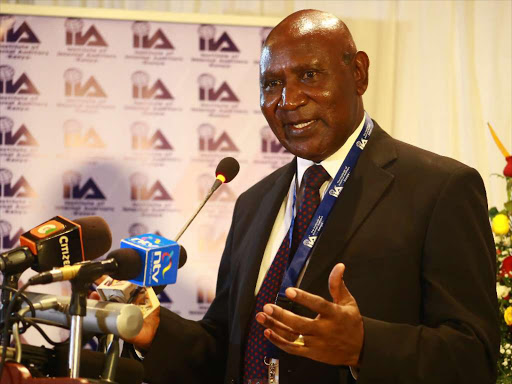 The delay by President Uhuru Kenyatta to replace Edward Ouko has grounded critical operations at the Office of the Auditor General.

According to deputy auditors general Edwin Kamar and Joyce Mbaabu, the office cannot sanction special audits. They said this when they appeared before the Public Investments Committee last November.

For instance, the fresh audit ordered by the Senate Agriculture committee into the Galana-Kulalu project can only be authorised by a substantive Auditor General, the Star reported last year.

The OAG is also unable to initiate any procurement processes as the professional opinions can only be signed by the auditor general – the accounting officer.

In addition, the office cannot be represented in state accounting officers’ monthly meetings.

President Kenyatta was last year required to submit the nominee to the National Assembly for vetting after the Public Service Commission concluded the interviews.

PSC chairman Stephen Kirogo is on record saying 17 candidates were shortlisted, and the number was later narrowed down to three. The three names were forwarded to the President in the week ending November 2 last year.

Kirogo expected the country would have a new Auditor General by January this year.

According to the Public Audit Act 2015, President Kenyatta was required to pick one nominee and forward it to the National Assembly for vetting.

The Act stipulates that the President should choose a nominee within seven days of presentation of the list of three candidates.

From November 22 – the date the panel presented its report – the President was expected to forward the name to the National Assembly by December 3.

The delay and the implications have seen accountants push for changes in the law to allow the appointment of an acting head of the National Audit Office to fill the void left by an Auditor General.

The Institute of Certified Public Accountants of Kenya argues the move would ensure timely approval of the budget as well as audit of counties and the national government, even with the expiry of an Auditor General’s term.

But why the delay?

There have been reports that the President is not comfortable with the list submitted to him, and that there are plans "to get the right candidate" for the job.

At one point in 2016 in the famous "mnataka nifanye nini" tantrum,  Uhuru attacked Ouko over the Eurobond saga at the Anti-corruption Summit at State House.

He accused Ouko and the opposition of pursuing “a matter that had long been closed by the relevant financial institutions” and only saying money had been lost without follow up or action.

Legally, however, it is not the Auditor General's mandate to investigate and prosecute

Sources privy to the selection process told the Star that powerful State House officials have reservations with the three candidates presented by the PSC.

“The feeling is that the appointee must be someone who would not expose the government to the embarrassment that audits have caused to this country,” a source who did not want his identity made public told the Star.

The source said there was a high likelihood the PSC will interview the shortlisted candidates afresh, who come from Nyanza, Eastern, and Northeastern.

“The government is keen on averting a situation that will expose its back on matters accountability,” the official said.

The law requires that part of the President's report to Parliament must contain details of the candidate's performance in the interview.

This means the choice nominee must have had exemplary performance.

Nine staffers at the Auditor General’s office made it to the shortlist of 17.

The Act says the selection panel shall hold its proceedings in public and submit to Parliament a report of the interview proceedings.

Article 229 of the Constitution

(2) To be qualified to be the Auditor-General, a person shall have extensive knowledge of public finance or at least ten years experience in auditing or public finance management.

(3) The Auditor-General holds office, subject to Article 251, for a term of eight years and shall not be eligible for re-appointment.

(a) the accounts of the national and county governments;

(b) the accounts of all funds and authorities of the national and county governments;

(c) the accounts of all courts;

(d) the accounts of every commission and independent office established by this Constitution;

(h) the accounts of any other entity that legislation requires the Auditor-General to audit.

(5) The Auditor-General may audit and report on the accounts of any entity that is funded from public funds.

(6) An audit report shall confirm whether or not public money has been applied lawfully and in an effective way.

(7) Audit reports shall be submitted to Parliament or the relevant county assembly.

(8) Within three months after receiving an audit report, Parliament or the county assembly shall debate and consider the report and take appropriate action.

The issue should be expedited to save the country from plunging into a worse crisis.
News
2 years ago

Selection panel says it did not find a suitable candidate from 17 applicants it interviewed
News
2 years ago
Post a comment
WATCH: The latest videos from the Star
by ELIUD KIBII Subeditor and writer
Siasa
04 June 2020 - 20:30
Read The E-Paper