• The government should ensure the inclusion of sexual violence risks in early warning mechanisms and security preparedness.

• There is also need to enhance coordination between investigative agencies, the Office of the Director of Public Prosecutions, survivors’ networks and civil society organisations. 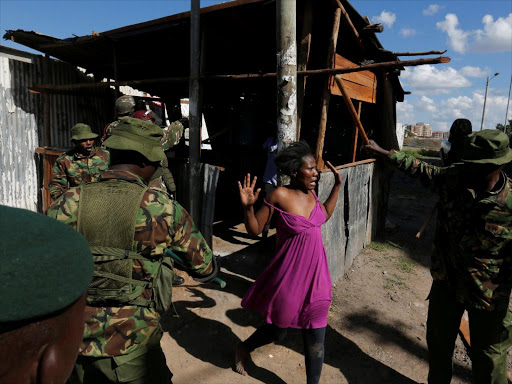 In the aftermath of the 2007-08 post-election violence, the Commission of Inquiry into the Post-Election Violence (Waki Commission) documented more than 900 sexual violence cases perpetrated by security agents and civilians against women, girls, men and boys.

Yet these statistics are only the tip of the iceberg. Most survivors of this ordeal do not report because they are terrified of reprisals from the perpetrators (especially where these are duty-bearers such as police officers), of stigma from their families, or re-traumatisation by service providers when reporting to the police or health facilities.

In December 2019, the UN Office of the High Commissioner for Human Rights, UN Women, and Physicians for Human Rights jointly published a new report – Breaking Cycles of Violence: Gaps in Prevention and Response to Electoral-Related Sexual Violence in Kenya – which analyses gaps in the prevention of and response to electoral-related sexual violence.

This was based on the experiences of survivors in Nairobi, Kisumu, Bungoma and Vihiga counties, where the majority of cases of sexual violence were documented during the 2017 elections.

Despite the volume of well-documented sexual violence crimes during the 2007 and 2017 elections, we are yet to see a single case result in a conviction. Justice has been delayed and denied, again and again. For the survivors and for this country, this is simply unacceptable.

The report found many challenges that undermined the effective prevention of and response to electoral-related sexual violence.

Yes, Kenya has a progressive Constitution, which recognises the right not to be subjected to any form of violence from public or private sources. And there are other laws and policies and new regulations to strengthen medical, law enforcement, and legal responses to sexual violence. Yet the study revealed that there were significant delays in implementing these laws and policies, resulting in inadequate resources for training and equipping medical service providers and law enforcement officers.

Numerous challenges were also identified in ensuring effective and survivor-centred forensic documentation, investigations and prosecutions of crimes of sexual violence.

These challenges cut across all sectors of service provision in cases of election-related sexual violence (ERSV). The delays of over eight years by the Judiciary in completing hearings and delivering judgments in constitutional cases filed by ERSV survivors are further compounded by the lack of government acknowledgement of the violations suffered.

Service providers, especially those in health facilities, did not have the requisite training to undertake forensic medical examinations, and clear and standardised protocols for effective collection, documentation and management of medical forensic evidence.

Therefore, in instances where survivors were in a position to report cases of violation, the healthcare providers were still limited in terms of what services they could offer. This delay, therefore, meant the requisite evidence was not collected. Chances of having a watertight case were greatly reduced by these inadequacies.

Additionally, investigators lacked knowledge of the specificities of ERSV and relied heavily on reporting and provision of corroborating evidence by survivors. There was also limited specialised prosecutorial capacity on how to prosecute and undertake prosecution-led investigations of ERSV.

Put simply, Kenyan government agencies were under-prepared and under-resourced to prevent, mitigate and respond to sexual violence. This was despite the past patterns of sexual violence during elections.

HOW TO MOVE FORWARD

In consultation with survivors, government agencies and civil society, OHCHR, UN Women and PHR have proposed a number of recommendations. They include a call for concrete actions to strengthen prevention, protection, and investigation, and prosecutions of electoral-related sexual violence. There is also a need to ensure accountability and reparations for these offences.

The report urges the government to take various steps. These include strengthening the inclusion of risks of sexual violence in early warning mechanisms and security preparedness.

The report further calls on the government to work closely with the county governments to prioritise the adoption and implementation of national health policies, laws, regulations, and guidelines on the management of sexual violence, and to establish safe shelters for survivors.

It also stresses the need to enhance coordination between investigative agencies, the Office of the Director of Public Prosecutions, survivors’ networks and civil society organisations. And, critically, the report highlights the State’s obligation to acknowledge the violations of the rights of survivors, and to commit to a meaningful process of consultations with them and civil society organisations to design and implement a comprehensive reparations policy.

Implementing these system-strengthening measures, and enhancing concerted action will help break the ERSV cycle. The report noted good practices that can be built upon, and that those communities that demonstrated better coordination between duty-bearers and civil society fared better during the electoral violence.

In Nairobi, the National Network of Survivors of Sexual Violence was at the forefront in monitoring electoral activities and reported signs of any risk of violence.

In Kisumu, clinicians at the Jaramogi Oginga Odinga Referral and Teaching Hospital and the County Technical Working Group worked with communities in advance to educate stakeholders on the importance of reporting ERSV cases.

These networks supported survivors to report cases in a timely manner, therefore, ensuring they received much needed post-rape care. Locals were also in a position to direct victims on where to report these cases due to the community awareness that was undertaken.

This is essential given that 45 per cent of women and 44 per cent of men aged between 15 and 49 years in Kenya have experienced sexual and gender-based violence. The lawlessness that is rife during elections only perpetuates the notion that perpetrators will enjoy impunity.

The Breaking the Cycles report is a stark reminder that the threat of ERSV in 2022 will persist unless we act now. With only just over two years to go before the next General Election, the clock is ticking for the government, the security forces, the health sector, civil society, and others to prepare and prevent the recurrence of sexual violence.

Prevention and response must be at the core of all the planning and contingency measures that will be applied ahead of and during the polls, including campaigns.

Everyone has a role to play — from the police, judges to civil society — to better support survivors and to ensure electoral-related violence never happens again. We owe it to our country. We owe it to the survivors.

(The full Breaking Cycles of Violence: Gaps in Prevention and Response to Electoral-Related Sexual Violence in Kenya report can be accessed at https://phr.org/our-work/resources/breaking-cycles-of-violence-gaps-in-prevention-of-and-response-to-electoral-related-sexual-violence-in-kenya/

Naitore Nyamu-Mathenge is the Head of Kenya Office at Physicians for Human Rights, Anna Mutavati is the Country Director for UN Women- Kenya and Li Fung is a Senior Human Rights Adviser at OHCHR.