• The main reason for Mogadishu push to control the federal states is to ensure BY 2020, the lawmakers will be pro-Farmaajo, making it easy to get re-elected.

• No President has ever been re-elected in Somalia before. President Farmaajo wants to break that jinx and hence his desperate attempts at controlling the states by installing his close associates. 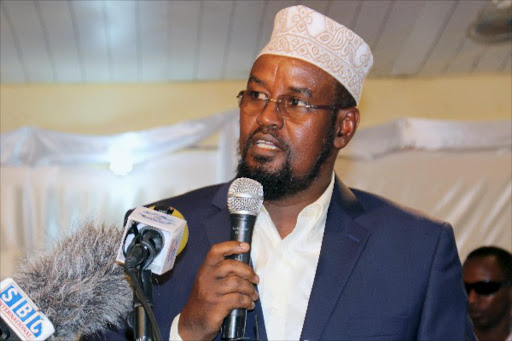 Ahmed Madobe speaks after being re-elected, in the southern port town of Kismayu August 15, 2015
Image: REUTERS

Jubaland lawmakers on Thursday re-elected Ahmed Mohamed Islam aka Madobe as president for a record third time, beating two other candidates with a huge margin of 56 votes out of 74.

His closest rival, Anab Mohamed, garnered 17 votes while the other candidate, Mahamud Mohamed, got only one vote. They conceded defeat.

This brings to an end a much-publicised and talked about election in Somalia, seen by many as a local, regional and international power struggle and political power game over the control of the resource-rich Jubaland state. Madobe is likely to consolidate his win, firmly hold onto power and further alienate the Federal Government in Mogadishu.

Madobe was immediately sworn-in at Jubaland Parliament chambers, where the election took place. He was reconciliatory in his acceptance speech and thanked the lawmakers who voted for him, those who didn’t and his competitors.

"Somalia is today going through a tough time that needs us to unite and remain as brothers who are ready to work together to salvage our country from the enemy. We have to all work together to improve and maintain peace because without peace there is no Jubaland," Madobe said.

After the election, thousands of people waving the Jubaland flag and that of Somalia took to the streets of Kismayu to celebrate his re-election. Miles away in Garissa, Kenya, which is inhabited by Somalis, a similar celebration was also witnessed. In Garowe city in the northeast state of Puntland, celebrations were also marked to welcome Madobe's re-election. Puntland and Jubaland, have always been on the same side when it comes to Somalia politics.

However, Madobe's re-election was somehow dampened by a kangaroo protest election by his opposition, who elected one of their own, Abdirashid Hidig, as a shadow president in a parallel election in the house of Hidig's other competitor Abdinasir Seerar.

Many local Jubaland residents view the parallel election as an outcome of the massive external influence by some foreign countries and the Somalia Federal Government in Mogadishu, which, from the onset, was against Madobe re-election. This was largely out of their own interest of retaining power in 2020 Somalia presidential election.

As expected, Madobe's election will be dismissed by the Federal Government of Somalia as earlier confirmed. But then, several other Somalia political parties will welcome and recognise his re-election. The international community's response is also likely to remain coy and cautious urging, both sides to avoid any actions that would jeopardise security and amicably resolve their political impasse.

Before the poll, Jubaland closed its land, sea and airspace in what the security committee termed as 'security precaution' during the election. This happened after an Ethiopian plane believed to be carrying Special Forces was refused to land at Sayid Mohamed Abdille Hassan International Airport in Kismayu. This claim could not be immediately confirmed.

Sources said Jubaland administration feared Ethiopian forces would be used by the Federal to stop the election as they in Baidoa by blocking the exercise and arresting Sheikh Mukhtar Robow. He was considered the favourite candidate.

"Today Kismayo is safe and sound but the city is on a lockdown. There are soldiers scattered all over the city. People were simply waiting for the election to end so that they can go back to their daily routine. The politics here overshadowed everything else. We are happy it has ended and that President Ahmed Madobe has been re-elected,'' resident Haji Abdi Nur said.

On social media, the election was the most trending news on Twitter, with some congratulating Hidig and others supported Madobe.

So, now that the election is over, what is likely to happen?

The outcome is a huge blow to President Mohamed Farmaajo's re-election in 2020. Jubaland has 43 MPs in the Federal Parliament, most of whom will likely not vote for him irrespective of being from the same clan largely because of Madobe's influence and rift with Farmaajo.

Sources also say Madobe's return has a ripple effect in Puntland state where incumbent Said Abdullahi Deni is facing an internal wrangle said to be bankrolled by the Federal Government. Madobe is now likely to give a lifeline to Deni. They are likely to forge a closer alliance against Farmaajo.

The main reason for Mogadishu push to control the federal states is to ensure BY 2020, the lawmakers will be pro-Farmaajo, making it easy to get re-elected.

Constitutionally, the government move is illegal, as the federal states should manage their elections.

No President has ever been re-elected in Somalia before. President Farmaajo wants to break that jinx and hence his desperate attempts at controlling the states by installing his close associates. He has succeeded in HirShabele, SouthWest State and Galmudug but has failed in Puntland and Jubaland, which is the last state to hold its poll before next year's crunch national elections.

Madobe, has ruled the Somalia state since 2013, he will now serve for another four years.
News
2 years ago

Intrigues of three Kenyans in race for Jubaland president

Guleid Khalif, an expert of Jubaland politics wants the Kenyan government to ask the candidates to pull out.
News
2 years ago