THE OPPOSITE OF SGR

• According to the Renewables Global Status 2018 report released in June last year, Kenya was ranked ninth globally in geothermal power generating capacity, and tops in Africa with 700 megawatts (MW) 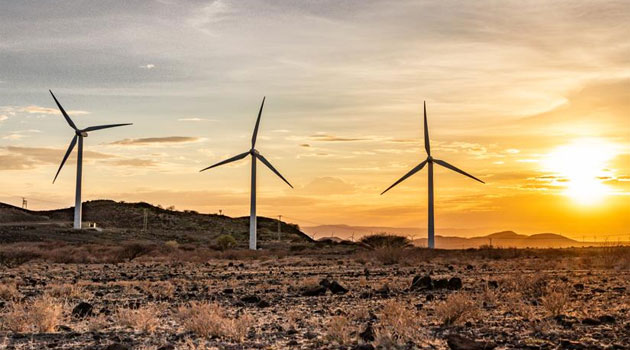 GEOTHERMAL ENERGY: Some of the turbines in the Lake Turkana power. The $680 million project was launched by President Uhuru Kenyatta on Friday, July 19, 2019.
Image: COURTESY

There has been an article on Kenya trending on Bloomber.com for about one week now. It’s titled “China Built A Railroad to Nowhere In Kenya”.

This article is clearly intended to demonstrate that Kenyans dreams of advanced infrastructure are doomed. Here is how it begins:

“Gleaming concrete sleepers run across a new railway bridge in Kenya, the latest stretch of a Chinese-built line from the coast all the way to Uganda.

Only, it doesn’t quite reach the border. Instead, the railroad ends abruptly by a sleepy village about 75 miles west of the Kenyan capital, Nairobi, the tracks laid but unused.

Construction of what was intended to be a flagship infrastructure project for Eastern Africa was halted earlier this year after China withheld some $4.9 billion in funding needed to allow the line’s completion. Beijing’s sudden financial reticence appeared to catch the governments of Kenya and Uganda off guard: Both may now be forced to reinstate a colonial-era line in a bid to patch the link and boost regional trade”

So it seems that the world is laughing at us over the SGR, which is now seen as a white elephant project.

We could add to this the Lamu Coal Power project, which was just last month stopped by the courts from starting based on environmental grounds. And then there are dams all over the country that were to have ended our water woes but have never been built despite billions having been paid to the contractors in advance.

Arror and Kimwarer dams are such examples, which are now at the centre of the recent corruption purge, in which Treasury CS Henry Rotich and PS Kamau Thugge were arrested and charged.

But maybe the world should not laugh just yet. For the SGR may have turned out to be different from what Kenyans expected, but that does not mean that all Kenyan infrastructure projects are white elephants. And here, it is important to consider the example of the Turkana Wind-Power project, which was inaugurated by President Uhuru Kenyatta last Friday.

A press release by the French Development Lending Agency Proparco, the key funding agency of this project, said “PROPARCO had mobilized a EUR 50m financing to the project company Lake Turkana Wind Power Limited (LTWP) to finance the construction of this flagship farm located in northern Kenya, in the Rift Valley. It will supply 17% of the electricity generated annually in the country and energy 60% cheaper than the energy generated by thermal power plants in operation in the country.”

By all accounts, this is good news.

Kenya’s installed power capacity has increased from 1,768 MW in March 2013 to the current 2,712 MW, with the Lake Turkana Wind, Garissa Solar Power (54 MW) and Ngong Wind Plants (26 MW) joining the grid in the last year.

“This project is the largest private investment ever made in Kenya (EUR 620m) and PROPARCO was actively involved in mobilizing its financing,” Jean-Benoît du Chalard, Proparco’s Regional Director for East Africa said at the commissioning ceremony.

Here is a project that demonstrates the exact opposite of what is being said about the SGR in the Bloomberg.com article.

Proparco’s loan was allocated in 2014 and has financed the construction and operation of this 310 MW wind farm. LTWP has installed 365 wind turbines which are connected to the domestic power grid, each with a capacity of 850 kilowatts, in Marsabit County, a site reputed for its regular winds.

Jean-Benoît du Chalard says the wind farm will improve access to reliable, sustainable and cheaper electricity and will supply 17 per cent of the electricity generated annually in Kenya.

“The project is now fully commissioned and connected to the grid and should reduce greenhouse gas emissions by 380,000 tons of CO2 a year,” he says.

The project has also created 2,500 jobs during the construction phase and 200 permanent jobs for the operation phase.

“It has and will have positive impacts for people: environmental, economic and societal benefits, with the creation of community programmes in the water, education and health sectors for local communities,” Jean-Benoît notes.

According to the Renewables Global Status 2018 report released in June last year, Kenya was ranked ninth globally in geothermal power generating capacity, and tops in Africa with 700 megawatts (MW).

During the Friday launch, President Uhuru Kenyatta said without the wind power project, the fuel cost charge would have been as high as Sh5.75kwh in May this year, as compared to Sh3.75 pkwh the cost that was applied in that month.”

“The successful implementation of Lake Turkana Wind Power demonstrates Kenya's outstanding credentials as an investment destination in Africa and is a perfect example of the immense potential of the public-private partnership model of implementing development projects,” Uhuru said.

The Lake Turkana project has received a number of awards, including the African Renewables Deal 2014 award by the Project Finance International Journal and Infrastructure Journal.

Beyond generation, this project has and will have positive impacts on populations — environmental, economic and societal.

The project will provide 17 per cent of the electricity produced in the country via reliable, sustainable and affordable energy and the avoidance of substantial carbon dioxide emissions.

It will create 2,500 jobs and bring wit it community programmes in the water, education and health sectors.

The wind project is a boost to the energy security and a huge leap towards eliminating fossil fuel energy base, a development that could shield Kenyans from the vagaries of global oil prices and unpredictable rainfall pattern.

The challenge is now in the Energy ministry to ensure high consumption of the already excess energy the country is producing to lower electricity bills.

Kenya is producing excess power due to low consumption which puches the cost up.
News
3 years ago
Post a comment
WATCH: The latest videos from the Star
by ELIUD KIBII Subeditor and writer
Siasa
27 July 2019 - 07:00
Read The E-Paper