ACTING FOR THE MASSES

Let’s get real, Ruto is not rags to riches story

• The celebrated hustlers from Jogoo Kimakia who once owned a fleet of buses in Thika, to Njenga Karume and his real estate, or even Steve Jobs of Apple Inc did not really start from rags.

• Like Trump in the US, Ruto, too, can woo the gullible with “I am one of you” farce. 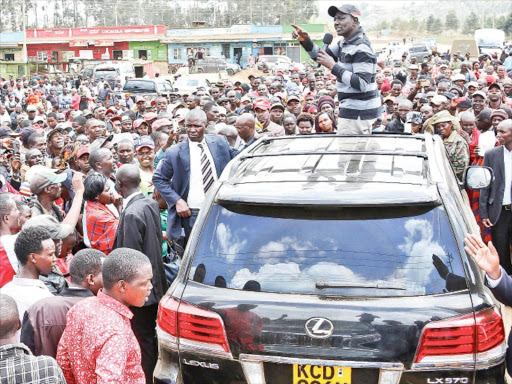 Donald Trump convinced a swath of angry white men, to vote for him to a man as US President by conning them to believing he’s one of them.

There’s no evidence that these people’s lives have improved any more than they would have had Trump’s opponent, or a mannequin, been elected president.

Instead, they’re witnessing hoard of scandals that plague his administration.

There will be tomes of books written analysing the pros and cons — but nearly all cons — of Trump’s presidency.

Deputy President William Ruto is looking to borrow a page from Trump’s playbook in his attempt to cast himself as not only one of your average, poor, starving, or barely surviving Kenyan but, even more deceptively, that if you do what he did, you, too, can one day rise to not only be president and have a fraction of his wealth.

All sounds good, except it’s a farce.

First, let’s be practical about this starting with the fact you’ll never, ever get the opportunity to be now retired president’s money bag man. That’s just practically impossible. That dream is thus quashed before it ends even in your dream.

Second, and as one astute observer has put it, the celebrated hustlers from Jogoo Kimakia who once owned a fleet of buses in Thika, to Njenga Karume and his real estate, or even Steve Jobs of Apple Inc did not really start from rags.

While they may not have had money, the socioeconomic environment was full of opportunities, not rags. Their mindset was rich in ideas and observation powers. They noted the patterns in their environment and exploited them. Not Ruto.

His meteoric rise in the charts in as far as money and wealth accumulation can neither be traced to a mindset rich in ideas and observation powers neither can it be traced to taking into advantage and economically exploiting what the environment offered and becoming as wealthy as he is.

Like Trump in the US, Ruto, too, can woo the gullible with “I am one of you” farce.

If in doubt, check in media reporting and you’ll note the man very regularly “mixes” it up with ordinary folk, chowing down nyama choma by the bucket in places you’d ordinarily not find even his driver. Most recently, he was in Dagoretti where he apparently showed up being driven by his son and with no security. Yeah!

Third, if there’s one thing Ruto has mastered in exploiting, it’s not the environment or economic ideas born of entrepreneurial acumen, but it has to do with maximisation of his strategic positioning in the political arena and to rip the most benefit, questionable or not.

The moniker “arap Mashamba” is a comical reference to our Deputy President but rightly or wrongly, even Ruto himself would have to admit, as he admitted that the land on which sits his Weston Hotel was acquired illegally, that land grabbing is a vice and anyone who so grabs, surely does not deserve reward as our next president.

Let’s hope and pray he doesn’t get so rewarded.

Post a comment
WATCH: The latest videos from the Star
by SAM OMWENGA Legal Analyst and Political Commentator
Siasa
11 May 2019 - 00:00
Read The E-Paper