SANG: Is Uhuru speaking through Murathe? 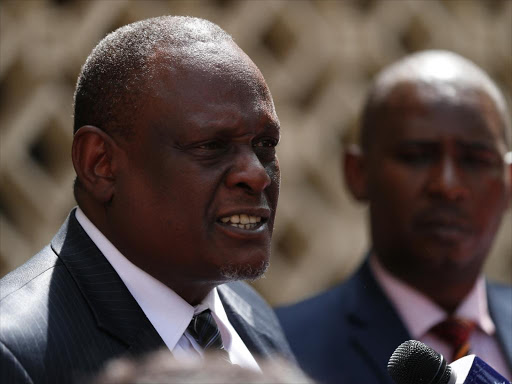 Jubilee Party Vice Chairman David Murathe during a media briefing at Parliament buildings where he reiterated that the party and its leadership will not engage in dialogue as demanded by the opposition coalition Nasa, January 25, 2018. Photo/Jack Owuor

Perhaps it is the look of his face that tells you that here is a man born for trouble, or in the very least, controversy. A big paunchy man, with a greying goatee, dark lips and perpetually blood-shot eyes (some say from his habitual usage of dependency-causing substances), you can almost see he has ran the gamut.

He fears nothing. But there is something that is unconcealed about his manner, though no man can keep anything hidden for too long. Many people believe, and I think correctly, that he is effectively the power behind the throne — the Mayor of the Palace in a manner of speaking. Listening to him speak at a public rally in Western Kenya last week, you would not miss the cautiously evasive yet unambiguously open message that was meant to vocalise what the President himself cannot put to words.

Murathe made it clear that there was no MoU with anyone, and that the anticipated support DP William Ruto was expecting from Mt Kenya, was not there after all. He urged the Rift Valley to produce another leader, other than Ruto.

Murathe’s remarks have blown through the political field like a category 5 storm. It was similar, almost in effect, to retired President Daniel Moi’s declaration that his Vice President, George Saitoti, “…ni rafiki…” (Is only but a friend) permanently changed the political landscape at that time. But Murathe’s was virtually one of countless clues that not all is well in Jubilee.

The fact that the President did not or has not out-rightly condemned or contradicted him, and the fact that Jubilee chairman Raphael Tuju even came to his defense, are some of the clues causing analysts to believe a storm is brewing in the ruling party. Clues have been going out for a while now, from the President’s “kutangatanga” invective to words set to music “kitaeleweka” and others.

It is not clear if anyone is reading too much or too little of the situation, but the writing, it appears, is finally on the wall.

When Nandi Senator Samson Cherargei fired the first salvo against Murathe, it was followed by unusual quiet by Ruto’s allies and the Kalenjin political class. In fact, none of the Deputy President’s usual volley masters (Duales, Murkomens, Sudis, Mandagos et al) have said much. Playing dumb seems to be the strategy for the moment. Ruto has often been quoted saying when the situation calls for it, he would play dumb ‘like Moi did’ — in reference to the former President’s penchant to appear stupid in the face of contemptuous treatment in the hands of junior officials.

When he was allegedly slapped (twice) by Rift Valley police boss James Mungai, Moi — then as Vice President — simply straightened his jacket, dusted himself and walked away. But when he became President, it was Mungai’s turn to run. He fled through Sudan and on to self-imposed exile in Switzerland — fearing victor’s revenge. This is why Ruto has said nothing to Murathe, and he will not. In fact, there has been more voice against Murathe from his Mt. Kenya backyard than from the bitterly disappointed Jubilee followers from the Rift Valley.

Ruto’s anticipated running mate Kirinyaga Governor Anne Waiguru could not hide her disdain for his remarks and has called for the Jubilee Party to conduct urgent elections to weed out Murathe.

The former Gatanga MP retorted saying he was only speaking what many in Central Kenya were afraid to say.

Those allied to the Deputy President from Mt Kenya region have also echoed Waiguru’s call. Ruto even got support from unexpected quarters such as former Kiambu Governor William Kabogo, who is not known to like him very much.

SILENCE OF THE LAMBS

It was actually Kabogo who first threw the bombshell when in June 2016 said Mt Kenya support for Ruto in 2022 was not guaranteed. Back then, many of Mt. Kenya leaders, including Irungu Kang’ata (Kiharu), Kimani Ichung’wa (Kikuyu), Alice Ng’ang’a (Thika Town), Maina Kamanda (Starehe), Jude Njomo (Kiambu), Benson Mutura (Makadara) and Kiragu Chege of Limuru, among others, quickly came to Ruto’s defence and thoroughly excoriated Kabogo. In fact, it is thought that those remarks compounded Kabogo’s problems and were directly attributed to his loss at the 2017 polls. But when Murathe dropped the bombshell, there was silence in heaven. The seventh seal, it seems, had been broken.

Of course the DP himself is not without blemish and penchant to create enemies as well as his stubborn indisposition to allow any opinion not acceptable to him was apt to fertilise dissent against him. However, those who distrust Ruto, do so for different reasons. There are probably as many reasons as there are detractors. And sometimes there are no reasons!

For some, it is his alleged role in the 2007-08 post-election violence — real or imagined. It has not disappeared in the minds of many. The same narrative comes out in the popular Kikuyu songs that strongly allude to this.

Others hate him because of his perceived corruptocratic tendencies. Others simply don’t like his energy, which, they believe stems from the fact that he eschews inebriation and such people are said to be particularly difficult if not out-rightly brutal and dictatorial (the Hitler-Churchill paradox).

Others don’t feel that he is competent enough to handle statecraft.

Critic-at-large David Ndii acerbically disparaged the recent PhD claiming it to be nothing but another title to colour Ruto’s obituary — he did not specify if it was the political one or the literal one. In brief, those who hate Ruto, do so for a plethora of reasons. The uncompromising pettiness of some of his haters, can only be matched by their own unscrupulousness much less the DPs.

Gideon Moi speaking in a recent televised interview, claimed to ‘love’ Ruto, which remarks were monstrously, if not theatrically ironic.

We are entering an uncertain though not entirely unprecedented state of affairs.

Murathe is the new Kihika Kimani. The latter spoke feverishly in near similar terms in the 1970s, only for us to discover later, and to our unsurprised dismay, that he was only speaking for President Jomo Kenyatta. They were the words of the President, unblemished. So what Murathe is saying, is not unprecedented, but it will have certain clear implications. The first is that it will intensify the ‘Change-the-Constitution’ movement and one of the referendum questions might just as well be to grant the President the express ability to fire his Deputy should the need arise. I am sure that if it was that simple, Raila would have been the Deputy President by now. Although the referendum is now appearing inescapable, Ruto will definitely try to craft a survival strategy, because it appears, his enemies were really not in NASA-ODM: They were in the house all along!

BETRAYAL IN THE CITY

It is rather ironic that post-handshake, the leadership of DP Ruto is inviting such unparalleled expressions of displeasure, when before that, he was such a darling.

He seems to have outlived the warmest admiration much of which he had gathered through his energetic defense of Uhuru during Kenya’s most uncertain period — before and after the two elections of 2017.

Ruto stood with all his might and fought for Uhuru, and would have taken the bullet for him if the need arose. This, everyone thought, would be the glue that would permanently cement the earlier resolve to have a Jubilee 10-10. But the road to perdition, they say, is paved with good intentions. If Uhuru had any good intentions with his deputy, then they remain just that, intentions. Nothing more.

It seems his strategy is to sacrifice Ruto at the altar of the handshake, to appease Raila. Even though Ruto had worked hard to have him reelected, he is guilty of failing to cause the quiet necessary to let him do his legacy projects. It is like Henry VIII who beheaded his wife for failing to bear a male heir, even though he had a child already by her. That power to create the much-needed quiet was in the hands of Raila and not Ruto. So Uhuru has simply moved with his cheese.

If, however, Ruto plays dumb, as he is currently doing, it seems that Uhuru will be building the political capital Ruto needs, inadvertently though it seems. If Ruto can successfully craft the narrative of betrayal as did Raila in 2005 and 2007, then things could go well for him in 2022: The law of Unintended Consequences. People rallied around the candidacy of Raila just because he successfully told them that he had been betrayed by Kibaki.

Supposing Ruto decides to bring down the house and declare a ‘Red Ocean’ strategy where all the predators go for each other? What would happen if he decides to spoil the party for Uhuru, as Raila did after sorely losing the two elections of 2017? Jubilee, it seems, was only held together because they had a powerful common enemy – Raila. In the absence of that, following the handshake, the party is now unravelling. In fact, this is possibly the moment when it begins to unravel as did its predecessors Narc and PNU.

Would rocking the boat from within buy Ruto a modicum of respect / sympathy? Knowing full well that they are tied in the hip, might he decide to upturn the apple cart if only to cause some pain for Uhuru for betraying him? Ruto will not do that. Even though he hates history, he is a good student of it. Raila tried it with Kibaki and failed miserably. For the moment, it seems he is content to play dumb. We are watching.