Why all East Africans are looking up to Magufuli 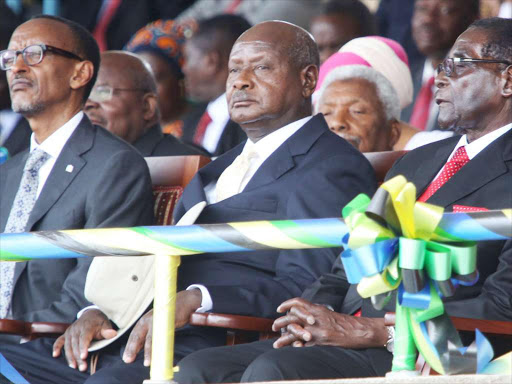 THE OLD GUARD: Presidents Paul Kagame (Rwanda), Yoweri Museveni (Uganda). ‘As the leaders of Rwanda, Burundi and South Sudan faced growing dissent at home, they too embraced the alliance of the leaders, which in effect turned the East African Commu-nity and IGAD into a club of dictators.’

In the club of East Africa’s Presidents, Tanzania’s new leader John Pombe Magufuli is a lonely man. His peers threw their weight behind his electoral opponent, and when he won, they refused to even acknowledge him with routine congratulations.

In office, Magufuli has discomfited the leaders further through populist actions. Banning Independence Day celebrations, for example, rankled Presidents who use such occasions to stoke phony nationalistic fires and lavish loyalists and business associates at state expense. He directed that the resources usually burned on the celebration be spent on expanding a major highway, and asked Tanzanians to spend the day cleaning the environment to check a cholera outbreak.

Those populist decisions have catapulted Magufuli and Tanzania to global spotlight, with millions around the world delighted by the high ethics he has infused into leadership. It is too early to write Magufuli’s legacy, but he has earned a place in the hearts of many East Africans, who for decades have yearned for a progressive leader in the mould of Mwalimu Julius Nyerere, Tanzania’s founding President.

Mwalimu laid the foundation for Tanzania’s unity and justice that endures to date. Whereas Tanzania was a natural leader in East Africa, given its large population, land mass and Pan-Africanist politics, it is Mwalimu’s statesmanship that earned it outsized respect. Tortuous market reforms and multipartism instituted from the 90s shook Mwalimu’s system to the core, but Tanzania maintains strong national identity, low income inequalities, and a foreign policy informed by society’s values rather than the whims of a powerful leader or group.

As a protégé of Mwalimu, Yoweri Museveni’s 1986 coup in Uganda raised expectations about a new Nyerere, but these dimmed within years as he entrenched himself through corruption and violence. After 29 years in power, Museveni is just about the richest man in Uganda, and he is exceedingly nepotistic – with his family members holding powerful public positions.

Unlike Nyerere who reigned in people’s hearts, Museveni schemed for regional leadership from early on, orchestrating coups in Rwanda and Congo. According to some sources, he even tried to topple President Moi, only to find Kenya too advanced for his guerilla tactics. Moi and Museveni had frosty relations, leaving Museveni closer to opposition leaders like Raila Odinga.

Kenya post-Moi saw new dynamics emerge. Keener on Ugandan business, President Kibaki fully embraced Museveni, whose removal of presidential term limits set him on a collision course with Kenya’s opposition leaders. So warm was the relationship that Museveni was the only African leader to congratulate Kibaki on the flawed 2007 election, and it was widely rumoured that he deployed Ugandan soldiers to Kenya to help Kibaki quell the violence that ensued.

There was another story lurking in the shadow of the Kenya-Uganda alliance. As the leaders of Rwanda, Burundi and South Sudan faced growing dissent at home, they too embraced the alliance of the leaders, which in effect turned the East African Community and IGAD into a club of dictators.

Tanzania’s Jakaya Kikwete diverged from his peers, and for that he was isolated when Kenya, Uganda and Rwanda formed a ‘coalition of the willing’ within EAC, which in turn radicalized Tanzania’s regional policy, culminating in the ruling party’s nomination of Magufuli, a committed 'Nyerereist'. It was no secret that EAC leaders threw their weight behind Magufuli’s opponent, Edward Lowassa, a rich former Prime Minister who defected to the opposition after being blocked from CCM nomination for past corruption.

The bet was on voters’ disaffection with CCM, whose presidential vote tally had dropped from over 80 per cent in 2005 to 63 per cent in 2010. CCM was widely tipped to lose in 2015. The irony of Lowassa’s candidature on a ticket of change however infused corruption sharply into the contest. Magufuli revived Nyerere’s progressivism long diffused from the centre of CCM power. He won the vote with 58 per cent, a record low for CCM, but a miracle compared to what awaited the country under Lowassa.

Regionally, Magufuli’s election ushered a new wave of optimism, putting Museveni, Kagame and Nkurunziza on the wrong side of history. He has continued to offer new and critical ways of rethinking our floundering economic and political ways which, while not going far enough, provide the necessary beginning for the real work that awaits him. The intense interest in his decisions in the region shows the stakes for people beyond Tanzania. To maintain momentum, he must mobilize in greater numbers and get millions of Tanzanians engaged in the political and economic process.

He must look deep to understand the interest regional elites have in Tanzania. Kenya, Uganda and Rwanda suffer unprecedented land pressure, made worse in our case by historical injustices. Tanzania alone in the region is still wide open, despite its big population of 50 million. It has the natural resources that have fueled economic growth elsewhere in Africa - including large reserves of gas, gold, diamond, gemstones, nickel, copper, uranium, kaolin, titanium, cobalt and platinum.

Tanzania also has abundant and fertile soils. Thanks to 'ujamaa' (socialism), most of its people live in clustered villages, leaving the vast countryside unsettled; of its more than 43 million hectares of arable land, only about 10 million hectares is currently farmed. Tanzania also has nearly half of East Africa’s renewable water resources, with nine major lake and river drainage basins along which the country’s administrative regions fall.

These resources need immense capital to exploit for economic development. President Magufuli’s action on corruption should coexist with the promotion of regional investment. Westerners will marvel at his anti-corruption efforts but hardly provide the capital that Tanzania needs, especially in rural, non-mineral sectors. China can build large infrastructure, but taking advantage of that requires local capital too, of which Kenyans, Ugandans and even Somalians have plenty. His move to ban Brookside Dairies from buying Tanzania milk could have been hasty.

There are multiple crosscurrents and competing agendas in East Africa that make it hard to find common ground on good governance, and President Magufuli needs a framework for this while also sharing Tanzania’s wealth with his neighbours for common prosperity. Newly-rich Tanzanians are reshaping their trade policy with Kenya, which saw Tanzania overtake Uganda in 2014 as Kenya’s leading export destination.

While the EAC customs protocol made Kenyan goods cheaper than South Africa’s, Tanzania itself is getting a large market in Kenya for its agricultural exports like cereals, fruits, onions, milk, groundnuts, raw cotton and seed cakes, as well as fish and fish fillets, gemstones, hides and skins, live animals, timber and timber products, tyres, detergents and power transformers.

By catalyzing nationalism, which is very rarely harnessed by left-wing leaders, President Magufuli stands the right chance to increase Tanzanians’ productivity. Just by staying close to the organizing grassroots, he can fire up food production, which doesn’t require large capital, and has a ready market in Kenya.

President Magufuli will need to use his towering influence in East Africa to make the EAC, now too business-centered, relevant to the people by championing neglected protocols on good governance. His election at this time when Tanzanians are nervous about an EAC dominated by autocrats, should herald a new era where regional integration works for the people first, then governments and corporations.