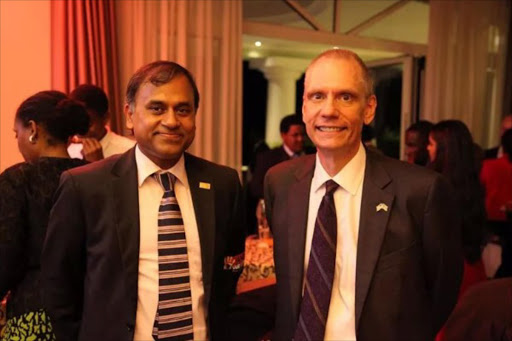 Siddharth Chatterjee the UNFPA Representative to Kenya and US Ambassador to Kenya Robert F. Godec

Every year, Female Genital Mutilation scars thousands of young women and girls in Kenya physically and emotionally, for life. As President Barack Obama said during his recent visit to Kenya: “There’s no reason why young girls should suffer genital mutilation…” This tradition has “no place in the 21st century”.

The practice consists of cutting away part of the external female sexual organs, often without anesthesia. Complications include loss of sensation, recurrent infections and pain, cysts, infertility, pregnancy complications and even death. It has no known health benefits.

UNFPA and UNICEF estimate that girls and women globally have been subjected to it.

Fortunately, years of heroic work by many organisations and individuals is offering hope that this harmful tradition will end. The recent survey indicates FGM nationwide has fallen to 21 per cent of the current population.

In a landmark ruling, the Kenya constitution of 2010 in the Bill of Rights chapter, article 53 (1) (d) declares, “Every child has the right to be protected from abuse, neglect, harmful cultural practices, all forms of violence, inhuman treatment and punishment, and hazardous or exploitative labour.”

A 27-year-old Samburu moran, Lolkirik Leorto, exemplifies one example of this enlightened new attitude. Although he never went beyond secondary school, he is wise enough to have joined the gallant campaign against forced female circumcision.

Leorto is among community champions working with World Vision Kenya in Barsaloi, Samburu. Part of the work involves scouting for girls wishing to avoid genital mutilation, and finding rescue centres, often with different churches or religious institutions, where such girls can continue with their education.

One intended victim he rescued not only escaped the fate of genital mutilation, but also went on to become a medical student at the University of Nairobi. She may well become the very first female surgeon in Leorto’s Samburu community.

Then 15, Sepina (not her real name), was just about to complete her primary schooling when Leorto met her through his community work. Her father wanted her circumcised, after which she would most likely be married off. She wanted to keep her body intact and continue with her education, but her father threatened her if she refused to undergo the mutilation.

Through his community advocacy work, Leorto learned of Sepina’s case. And working with the local Roman Catholic Church, the local administration and World Vision in Barsaloi, Leorto found shelter for Sepina, who was able to continue with her education.

Kenya has come a long way from the small, uncoordinated programmes in the 1980-90s, with the national response led by the newly formed Government of Kenya Anti-FGM Board.

The Kenya Women Parliamentarian Association, with support from UNFPA/UNICEF joint programme and funding from Britain, Norway and other donors, drafted the Prohibition of Female Genital Mutilation Act, 2011. The 10th Parliament passed the bill.

The bill is a tool to use in prosecuting perpetrators, but other approaches are important as well, such as community dialogue, advocacy at the national level, and helping target groups understand that forced female genital mutilation is a violation of human rights. Enhancing the capacity of the police, prosecutors, health professionals, magistrates, and religious and cultural leaders has led to coordination of different sectors, such as health, judiciary, and security. It has encouraged community dialogue, culminating in public declarations/commitments by religious and cultural leaders against Female Genital Mutilation.

The Kenyan media has increased coverage of the issue, increasing public awareness and encouraging prosecution of FGM cases.

During his recent visit, President Obama met a young Kenyan who said her future is brighter because she had escaped this barbaric practice. Sixteen-year-old Linet Momposhi told the President how her friend suffered genital mutilation at 12, was married off, and now, at 15 years old, has three children she cannot afford to educate. In contrast, Linet attended boarding school and now hopes to study at Harvard University and become a cardiologist. As President Obama said, female genital mutilation might be a custom, but its time has passed. It is out of place in our world, and all of Kenya will benefit when this practice becomes extinct.

Kenya’s remarkable First Lady, Margaret Kenyatta, poignantly remarked: “As a country, we must aspire to achieve a zero FGM status, where every girl can go to school, find and fulfill her destiny, enjoy her rights and contribute to nation building.”

Let’s all commit to ending the terrible practice of FGM.

(@bobgodec) is the US Ambassador to Kenya and Chatterjee (@sidchat1) is the UNFPA Representative to Kenya.