Mbusi's dreadlocks were chopped off with a panga 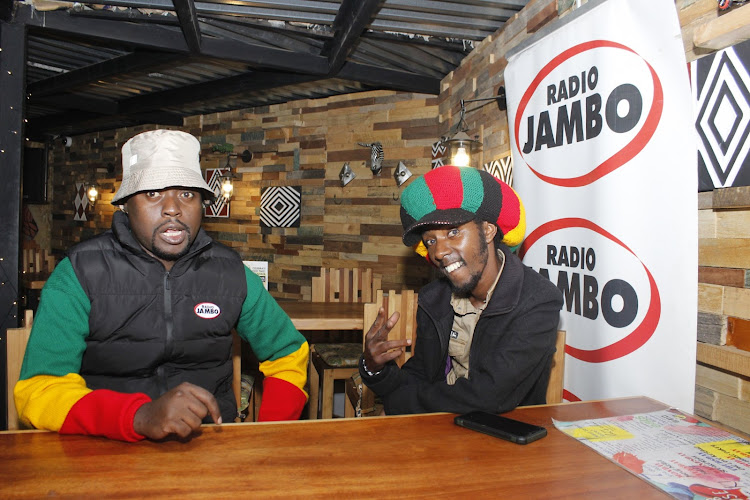 Radio Jambo drive show host Daniel Mwangi, famously known as Mbusi, says 15 years ago he was accused of being a member of Mungiki.

His mastery of Sheng has given him a niche in reggae radio shows, but 15 years ago Mbusi worked as a hawker.

Speaking to Word Is, he recounted how his dreadlocks were maliciously chopped off with a panga while he hawked in Eastleigh.

"This is my second time having dreadlocks. The first ones, I was arrested in Eastleigh and they shaved me using a panga in 2007," he said.

"They then let me go, saying it was illegal to have dreadlocks in Kenya. I was hustling using a small bike."

He said his dreadlocks are his trademark as he loves being natural.

"It's not for fashion but I believe all humans are supposed to be natural," he said adding that no amount of money can convince him to shave.

"I will be buried with my hair. My wife does retouch for me and I enjoy that."

He called out people who grow dreadlocks for the wrong purpose.

"If you are a thief and you keep dreadlocks, you are spoiling our names. Don't hide in the Rastafarian community, we are a peaceful people," he said.

Mbusi said he will be ordained as a high priest by the Rastafarian Society of Kenya in March.

"I have discovered myself very well at the moment. Previously I was a Christian but very soon I will be ordained by the Rasta Society of Kenya to be a high priest," he said.

Upon ordainment, Mbusi will be among the officials of the religion whose headquarters in Kenya is in Kibera.

"I will be a high priest in the Rastafarian community. They have sat me down and taught me all the ways and I am now qualified."

Lion (his cohost) will be ordained as an elder.

Mbusi said the movement is not a cult.

"It is a religion like Christianity or Islam. The movement is so clean, we do not sacrifice a human being. We read the Bible but we don't ask for tithe."

Reggae show host said he is saved
Sasa
2 years ago

The presenters say Sheng songs should not be banned from radio.
Sasa
2 years ago
by ELIZABETH NGIGI Lifestyle, Entertainment Journalist
Word Is
19 January 2022 - 00:00