Kamp, Prisk and MCSK say they are an honest group in need of support 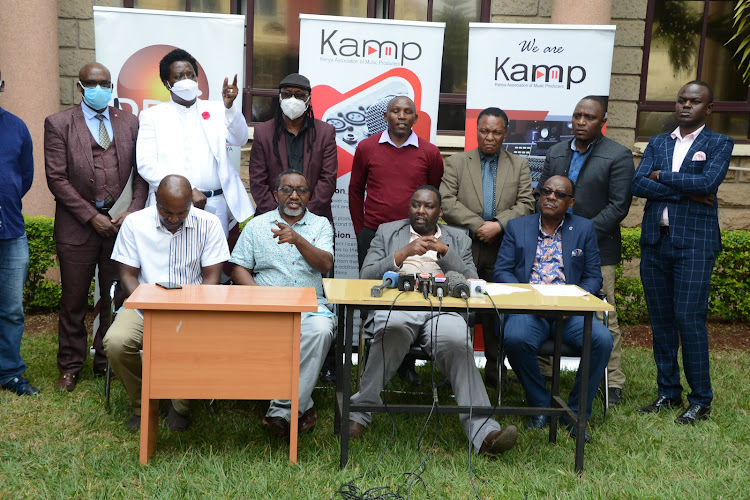 Collective Management Organisations, the entities in charge of royalties, yesterday called for dialogue with the government after it revoked their licences.

The Kenya Copyright Board deregistered them for failing to meet its conditions on administrative costs and transparency.

"Let's sit down and have a conversation and know where the problems are. We are not perfect and so we will allow any conversation to engage for the sake of this industry and see it rising again," he said.

Njoroge said since the revocation of their licences, they have lost a lot of revenue.

"The action by the regulator has created a vacuum where users of music works exploit these works without clear directions of an alternative collecting mechanism," he said.

"This is both irregular and uncalled for given that music is an intellectual property and cannot be exploited."

He added that Covid-19 has hurt their primary clients in the hospitality and transport sectors, causing unprecedented low collections that currently stand below 50 per cent compared to previous years’ revenue collections.

"As the President said, this industry is worth Sh2 billion but we are barely scratching the surface as a result of a few factors, including the issues of tariffs and Covid-19."

"We are operating within a very harsh environment and this has made us even reduce our operations. Fifty per cent of the revenue that has been generated by the hotel and matatu industry has been low."

He said it was one of the reasons money that went to artistes has been reduced.

Specific conditions not adhered to are a breach of administrative cost limit and diversion of royalties into an undeclared account, whose operations are not monitored by the board.

On whether there was a misuse of funds, Njoroge said none of them is ready to misuse the hard-earned royalties of their members because it is who they represent.

"We are an honest group and all we are asking is support from the government, and we are willing to engage and ensure that we work effectively."

We have nothing to hide on royalties, says MCSK

Group said its integrity is being discredited to incite its holders
Sasa
1 year ago
Kecobo revokes Kamp, Prisk and MCSK licences
by ELIZABETH NGIGI Lifestyle, Entertainment Journalist
Word Is
01 September 2021 - 00:05