A few months ago, his mother Sandrah said Mzee Abdul Juma is not the singer's biological father.

• Diamond said President Magufuli achieved a lot and that shows, if they keep working hard, they will make it.

• Says he believes in President Samia Suluhu Hassan's leadership, having worked with her severally. 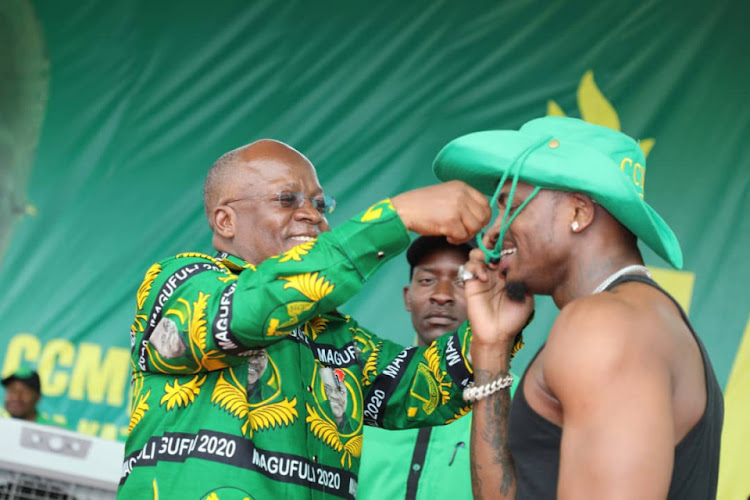 Speaking minutes after viewing Magufuli’s body at Uhuru Stadium on Saturday, the Wasafi CEO said Magufuli was like a father to him.

He added that the President was also concerned with matters affecting Musicians and Tanzanians at large.

"The biggest thing is to always do things that our late President talked about, especially encouraging the youths in Tanzania that everything is possible."

Diamond added that President Magufuli achieved a lot and that shows, if they keep working hard, they will make it.

"When he said Tanzania is rich, he did not mean we have money at hand but instead meant the resources we have are enough to give us development. He worked closely with the community and at times, he would call me and we spoke as a parent to me".

"I will remember him for so many things. Alikuwa anatumia muda mwingi kufanya kazi ili tupate maendeleo," the musician said.

A few months ago, the controversial paternity surrounding Bongo star Diamond Platnumz made headlines after his mother Sandrah said Mzee Abdul Juma is not the singer's biological father.

Diamond  said he believes in President Samia Suluhu Hassan's leadership, having worked with her severally.

"I was brought up by a single mother and so I believe the country is in good hands. Muhimu tumuombee bila maneno mengi."

Diamond and Magufuli were friends.

On December 31, 2019, he called him in the middle of his show in Kigoma to congratulate him. Some time back, he also called him during an interview on Clouds TV lauding him for a good job in the music industry.

Diamond and other Bongo artistes teamed up to pay tribute to Magufuli through a song called Lala Salama.

Magufuli will be laid to rest on March 26. He died last week on Wednesday.