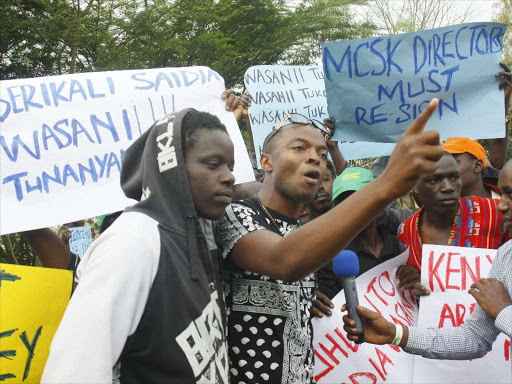 Musicians protest outside the MCSK Awards venue in 2014.

The Kenya Copyright Board's (Kecobo) executive director, Edward Sigei, said the board had agreed to issue MCSK a license after it was taken away two years ago,

Well, the chairman of Music Publishers Association of Kenya (Mpake) Bernard Kioko, doesn't think the process was clean and procedural.

Kioko has written to Sigei in a letter dated January 25, 2019. In it, Kioko seeks to find out the process in which the MCSK received it's 2019 license.

The letter reads in part: "Kecobo has apparently taken a decision about licensing without there being an active board as the terms of the board expired on the 30th of October 30, 2018, as per your letter to Mpake."

The last published appointment of the board of directors to Kecobo is in a gazette notice dated 21, October 2015.

The Kecobo website has also not updated it's board directors with both Desmond Katana and David Muriithi still listed.

Katana is now a director at MCSK while Murithii - now a former Board Member at Kecobo has been deployed to chair the MCSK board for a period of one year to assist in reforming the organisation.

Kioko points out, "Our understanding is that the previous board deferred the issue of licensing a CMO for authors, composers and publishers. Your letter also advises that Kecobo has licensed MCSK, an action which appears to have happened after the board term had come to an end."

The letter also postulates, "Kecobo has failed to satisfactorily regulate the industry by allowing rogue CMO operations to continue unabated. KAMP/PRISK/MCSK are all apparently licensed despite not meeting conditions of their past licenses, openly disregarding Kecobo guidance and having failed to distribute monies to rights holder per the 70/30 ratio as advised by KECOBO. Indeed by issuing licenses KECOBO seems to be endorsing the errant behaviour."

In a press statement on January 21, Kecobo defended licensing MCSK saying, "To secure a license, MCSK was required to hold elections, restructure its management, agree to a forensic audit of its financial records of the last two years and accept an independent Board Chairperson to oversee a turnaround. It was also required to obtain new letters of authorisation from its members and provide further details of its members.

Kecobo management will analyse the CMOs Memorandum and Articles of Association to find areas of wastage and non-compliance and advise accordingly. In addition, the Directors of the three Collecting Societies will be subjected to further Corporate Governance training in due course.

These and other conditions are interim measures to enhance management until the Copyright Amendment Bill is passed. The legislation is expected by June 2019.

"The Pending Copyright Amendment Bill, which is before Senate, will give Kecobo more flexibility in dealing with CMOs management when passed and assented to by the President," said Sigei.

Meanwhile, Kenyan musicians have appealed to President Uhuru Kenyatta to look into the issue of royalty collection.

"We have sought answers from Sports Arts and Culture Cabinet Secretary Rashid Echesa on how the Kecobo CEO managed to unconstitutionally issue the license letter on a Sunday yet we had sought to solve the problems in royalty collection and we were in the process of awaiting the CS guidance," said the statement signed by Kenyan artistes among them singers Rufftone and Nonini read.

"The CS informed us that Kecobo CEO went against his directive not to issue any communication on licenses or the licenses before outstanding conditions that denied MCSK a license in 2017 were resolved and all stakeholders are on one page with a lasting solution to the problems that have existed in the whole business of royalty collection," they said.

"It's good to take note that, MCSK was deregistered in 2017 because they collected money and did not pay artists. In 2017 and 2018 they continued to collect illegally and not paying artists, further the court found them guilty and ordered Kecobo to take action. Instead, they have gone ahead to license the same organisation which has not paid any artist in years," the statement concluded.

Post a comment
WATCH: The latest videos from the Star
by By Grace Kerongo @hotsecretz
Word Is
25 January 2019 - 18:00
Read The E-Paper