Chimpanzees, which along with their cousins the bonobos are the closest living genetic relatives to people.

•Chimpanzees, which along with their cousins the bonobos are the closest living genetic relatives to people.

•The researchers determined that these call types were used in 390 different sequences. 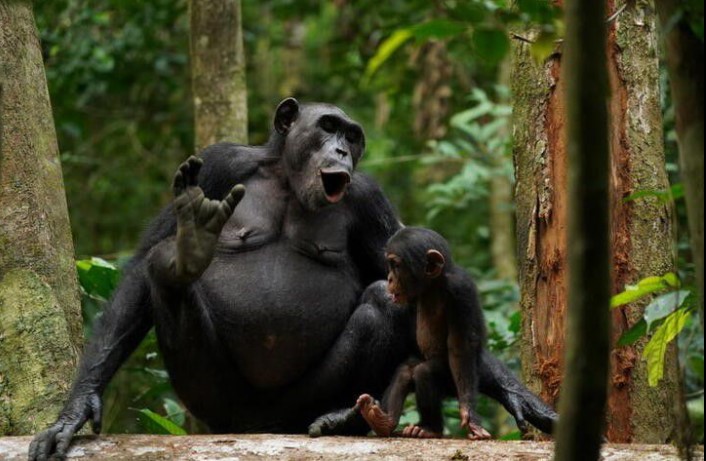 Scientists exploring the evolutionary origin of language have detected a vocal communication system among wild chimpanzees more complex and structured than previously known, with a dozen call types combined into hundreds of different sequences.

The researchers made more than 4,800 recordings of vocalizations produced by members of three groups of chimpanzees inhabiting Ivory Coast's Taï National Park, one of the last major remnants of old-growth tropical forest in West Africa and home to a rich array of plants and animals.

Chimpanzees, which along with their cousins the bonobos are the closest living genetic relatives to people, are intelligent and highly social apes that make and utilize tools and can be taught some basic human signing from sign language.

Scientists have long known that chimpanzees use various vocalizations in the wild, but the new study offered a comprehensive examination of this intra-species communication.

"It is not a language but it is amongst the most complex forms of communication described in a non-human animal," said behavioral ecologist Cédric Girard-Buttoz of French research agency CNRS's Institute for Cognitive Science and lead author of the study published this week in the journal Communications Biology.

The order in which the chimpanzees produced the calls appeared to follow rules and structure, though the study did not include conclusions about any potential meanings.

"The key finding is the ability of a primate other than humans to produce several structured vocal sequences and to recombine small sequences with two calls into longer sequences by adding calls to it. It is important because it shows the premise of structured communication which could have been the foundation of the evolution towards syntax in our language," Girard-Buttoz said.

Syntax refers to the arrangement of words and phrases to construct understandable sentences.

The researchers want to learn whether the various sequences communicate a wider range of meanings in the complex social environment of the chimpanzees. They have suspicions about the potential meanings of certain vocalizations.

"We need to explore in detail the contexts of emission of these vocalizations to see if it shifts between single calls and sequences," Girard-Buttoz said. "Then we need to conduct playback experiments to see if the suspected meaning matches with the behavioral reaction of chimpanzees when they hear the call."

The researchers are not certain whether chimpanzee vocal communication may be similar to the beginnings of language in the human evolutionary lineage. Humans and chimpanzees share a common ancestor but split into separate lineages perhaps 7 million years ago.

"Protolanguage was probably in between what chimpanzees do and what humans do," Girard-Buttoz said.

Welcome to the new paid version of WhatsApp

Another feature that is already available in certain countries is the ability to send money via WhatsApp.
News
2 months ago

Our environment is a factor in learning new tastes.
Sasa
2 months ago

Make healthy and delicious masala mushrooms with these steps

Mushrooms have a high nutritional and medicinal composition as they are fat-free, and low in sodium and cholesterol.
Sasa
2 months ago

Find out how to drink water after a heavy session, and the best time to hydrate.
Sasa
2 months ago

Remember, healthy food that someone else makes will always be more expensive than food you cook at home.
Sasa
2 months ago

Leafy greens also contain a specific type of sugar that helps fuel the growth of healthy gut bacteria.
Sasa
2 months ago
“WATCH: The latest videos from the Star”
by REUTERS Reuters
Travel
20 May 2022 - 17:14