Ostriches cannot fly due to size and weight 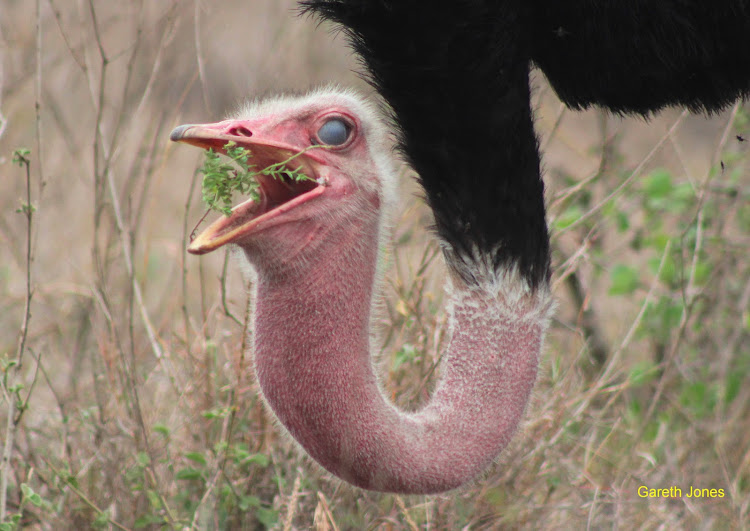 One fine afternoon I drove into the park from the East gate. An ostrich was walking quickly parallel to the road. So I drove slowly forward towards him, the ostrich responded by increasing its pace to a steady jog, and then began to run as

I drove along at about 30km/h, this continued for over a kilometre as he seemingly tirelessly ran slightly ahead of the vehicle over the grass next to the road. Then he suddenly broke into a sprint and darted across the road, with a zigzag movement as though he was trying to get away from a predator. Then he stopped suddenly and behaved as if I was not even there, and continued to look for suitable stones to digest on the ground. Maybe he just like running to keep fit or just for the sheer joy of it?

They are interesting to watch, firstly they are the largest birds in the world, and they cannot fly due to size and weight. Males look majestic with black feathers and a white undercarriage, while the females are a drab grey. Imagine if women in our world all looked drab, and did not care for fashion? They also swallow stones to help the digestion process, it’s no wonder they can’t fly with that extra weight!

The species in the Nairobi park are the southern sub-species with pink/reddish legs, especially in breeding season. The Nairobi National Park has a healthy thriving ostrich population.

Kenya is also one of the few places where the rarer northern (Somali ostrich) sub-species with its blue legs is also found.  Ostrich are the fastest and heaviest flightless bird species in the world.

Spend a day in the park, go “birdwatching”,  you will be surprised at how many other animals can also be seen, if you slow down to the pace of nature.

For information on the park link to the following website: www.kws.go.ke

Post a comment
WATCH: The latest videos from the Star
by Gareth Jones Nature Writer
Travel
22 April 2022 - 03:00
Read The E-Paper