They become increasingly quarrelsome as they age

• They are a delight to watch 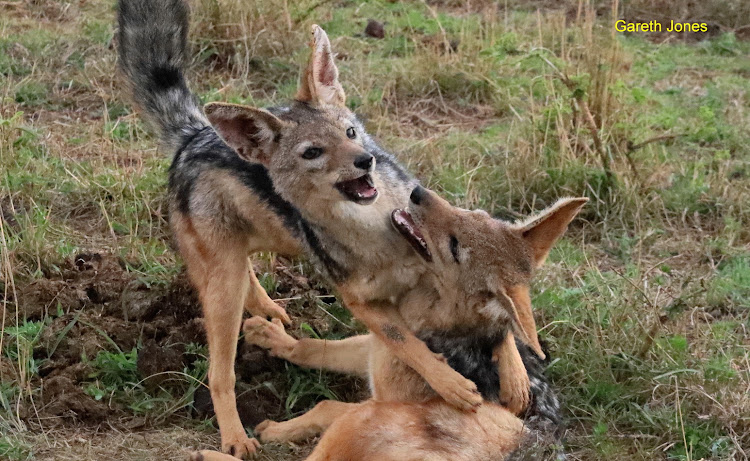 Early one cool cloudy morning we entered the East gate and drove towards the southern end of the park. As we approached the no10 murram heaps, we found two black-backed jackal pups sitting completely alone with their parents nowhere near them.

However, the pups seemed to be perfectly happy and unstressed, and they began to play around our vehicle. One of them found what looked like the remains of an ostrich feather and picked it up, then continuing to victoriously parade around the immediate area with this “prize”, as the other equally playful jackal pup attempted to win the “prize” out of the other pups mouth unsuccessfully. We really enjoyed watching them for some time, eventually as we left as they gradually moved off further from the road.

On another early morning, we also entered the East gate and drove towards the middle of the park. Soon I saw a movement next to the road near No 6 junction, it was a black-backed jackal. Then I noticed something much smaller moving in the long grass on the opposite side of the road. We were excited to find that the smaller creatures were in fact cute little jackal pups.

Wow, what a sighting! After sitting quietly for about 15 minutes we were rewarded as they slowly emerged. We continued to sit quietly and soon 6 pups emerged and began to act more naturally as they played games around the burrow, like “catch in if you” can and “bite the stick”. Two of the pups were quite quizzy and came quite close to our vehicle.

Black-backed jackal pups become increasingly quarrelsome as they age. Dominant become independent at an earlier age. There is always something to see when looking at the wonderful creations of God. You never know what you might see and experience, perhaps some playful pups?

For information on the park link to the following website: www.kws.go.ke