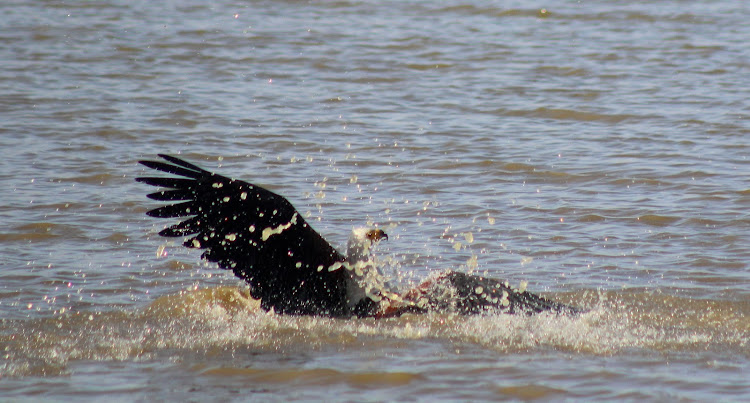 A few years ago sitting quietly for some time just enjoying the wildlife, we witnessed an incredible event at the Hyena dam in the Nairobi National Park.

A fish eagle dived down with its talons outstretched as if to try and catch a nice big fish. However, this “big fish" turned out to be a crocodile. The crocodile responded in a flash and nearly succeeded in pulling the fish eagle under the water.

After a brief struggle, amazingly the fish eagle had enough strength to break free and live another day. I wonder if the fish eagle saw movement near the water surface and mistakenly tried to catch a “big fish” crocodile? It’s difficult the try and understand why, however, we did witness a very rare occurrence.

There is something regally royal about eagles. The Nairobi Park has many resident eagle species, such as Martial, Fish, and Crowned Eagle that are all well worth watching.  Fish eagles are among my favourite raptors, and their call is also very unique and represents the sound of Africa. It is interesting to note that over many years, mankind has used the eagle emblem as a symbol to represent Freedom, Victory, the Future, and many more positive reasons.

To have eagles living so close to a major city is unique. They need to be protected. Nairobi Park is a safe haven for them to nest and breed. However as they can fly they often fly out of the park boundary, citizens need to be aware of the vital role of raptors such as Eagles, Hawks, Owls, they eat rodents, frogs, lizards, and snakes, and therefore ensure a healthy balance in nature.

Eagles are truly an incredible creation.