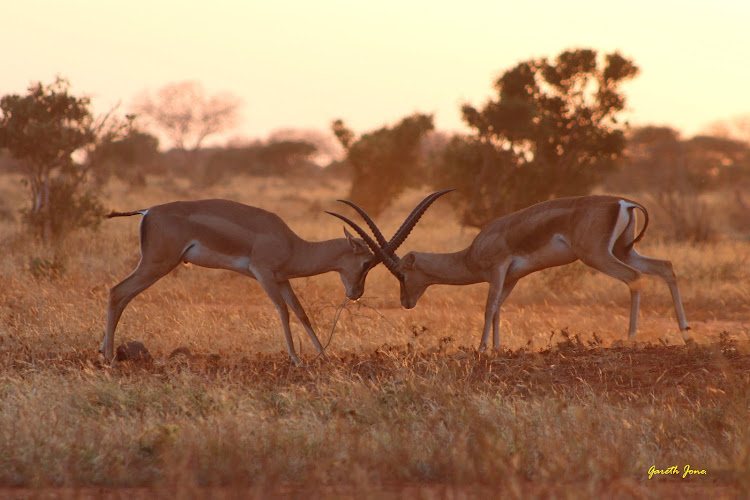 On a recent drive, while making slow progress towards the Athi basin, we saw mixed herds of Thomson's (Tommies) and Grant's gazelle. As we watched them, I was reminded of how agile and speedy these antelope are.

The Southern Grant's gazelle (Nanger granti granti) is found in the Nairobi National Park. The little “tommies” are fast and agile with recorded top speeds of up to 90km/hr. “Tommies” often outrun Cheetah when trying to escape, because although the cheetah can run at over 110km/hr, they can also achieve this speed for relatively short distances, while the Thomson's gazelle and grants gazelle can maintain their speed over a much longer distance.

There are parts of the park where mixed herds of Grant's and Thomson's gazelles move around together. I find it interesting that for thousands of years these two types of gazelles have lived in close proximity, and yet it seems that they have never interbreed.

Gazelles are very adaptive and can often survive in areas where there appears to be no water by means of gaining moisture from the plants they eat. Their enemies are predators such are cheetah, leopards, lions, jackals and Hyena, and also the super–predator, Man! Gazelles numbers continue to drop due to complex factors mostly involving mankind. However, the Nairobi National Park continues to be a place of refuge for them.

Yes! There is much-created diversity to see in the small but very unique Nairobi national park. After visiting the Nairobi National Park always leave satisfied with a “soul tonic” experience. Please remember “the slower the drive, the more you see what’s alive!”