It has unique attractions, such as the Mwangeka caves in Vuria hills and World War 1 sites

• County was the only one to experience First World War, though many don't know it 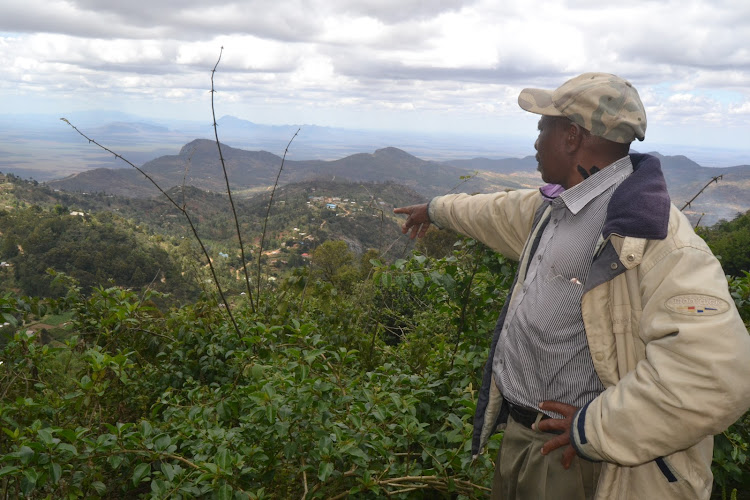 More than 60 per cent of Taita Taveta county landmass falls within the Tsavo East National Park, which is a major tourism escapade.

However, there is a hidden gem within the land of the hills, as it is famously known, which if exploited can be a major attraction for travellers.

Stakeholders promoting domestic tourism took journalists on a tour of the Coast to see its offerings.

During this leg of the tour, we exploit some of the key historical sites. These include Mwangeka caves at the Vuria hills, which have a history that dates back to the 1890s.

We begin our journey from Voi after exiting the Tsavo East National park to witness the unique tourism venture.

The drive to Vuria hills, where Mwangeka caves are located, is one of the most amazing ones, as Taita Taveta is a unique county full of amazing views and vegetation.

Roads are good along the hills and it gives a tourist a perfect experience of the hillside, seeing people living on top of hills and doing their farming there.

Even driving is an experience along with sharp corners and going high above the ground overseeing the lowland, which is far below.

However, the most amazing experience is the one at Vuria hills, where we had to climb over 1,800 feet above sea level at the highest point in the Coast region.

Slowly and tactically, we were assisted by locals to climb the hill to reach the caves, and after over two hours of walking uphill inside a forest, we reach the caves.

History has it that the caves were used by a famous chief in 1892 to fight oppression against the Arabs and the British.

The caves, which were used as training grounds for warriors of the famous Mwangeka, have a rich history that can be used as a tourism venture for hike lovers.

The Kenya Tourism Board wants to support the community in Mwanda, which is where the Vuria hills are located, to ensure the site is developed into one of the major tourism attractions.

Ibrahim Mwaruta, a retired senior assistant chief, said the caves were used as training grounds for the Mwangeka.

They used to charge taxes on the Arabs crossing to Zanzibar from Mombasa for trade, and they sought help from the British colonials.

It is during that period when one of Mwangeka's pointmen revealed the secret that led to his being shot, forcing the remaining warriors and community to hide in the caves.

He says they want to be supported to preserve the rich history of the Mwangeka caves for future generations to learn and tourists to visit.

Kitumo says at the caves, there are four chambers, which comprise the sleeping area, kitchen, which also acted as an armoury and maternity.

He says the National Museums of Kenya should take over the caves and help preserve the rich history in it. 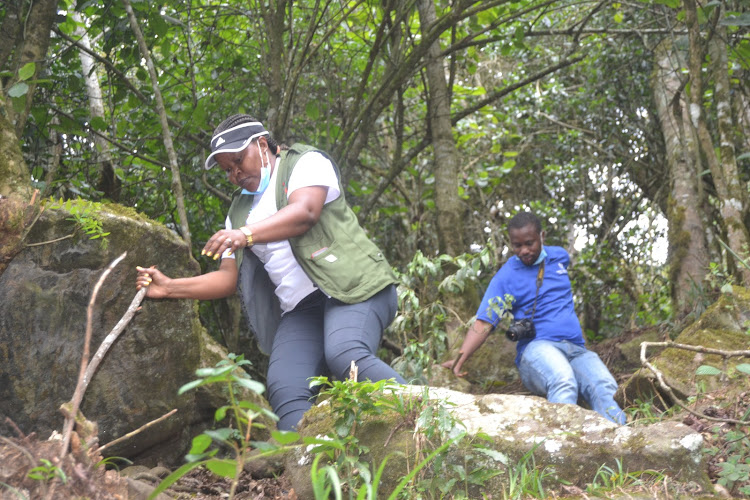 We spent the night in Taita Hills game lodge, formerly managed by Sarova, which has a rich history of World War One from 1914-18 that is being preserved to date.

Taita Taveta is the only location that experienced the First World War in Kenya, and to date, the memories still are evident.

"This is the actual area where the World War took place. You are sitting in the museum, it is a product on its own," says Willy Mwadilo, the general manager of the Taita Hills Lodge.

He explained in a two-hour lecture about the war and how the British and the Germans clashed there.

He said they have introduced battlefield tours to show the history of the war, which took place between Voi and Taveta.

They have identified 14 sites, of which 13 have been gazetted by the National Museum of Kenya while one is pending.

History has it that the first shot, which signified the start of the World War 1 land campaign in the East Africa Region, was fired on August 15, 1914, at the border town of Taveta in Taita Taveta.

The shot was fired by the then-acting District Commissioner at the Taveta police station and the shot killed a German soldier, F Broecker, whose grave is in the Taveta Commonwealth war graves, European World War 1 cemetery.

"It focuses on historic battlefields, where the fighting is long past and is much more strongly linked to heritage and commemoration," he said.

Among the itineraries includes a two days, one night WW1 battlefield experience with Ranger Guide, a regular itinerary of three days, two nights experience, and a long itinerary of four days, three nights.

Among the areas a tourist will be taken to include Mile 27 in the Voi-Maktau military line, Mashoti fort, Maktau, Mahoo, Indian ww1 Memorial, Snipers Baobab Tree, Salaita Hill and former Taveta police station.

Others are Commonwealth War Graves Commissions in Maktau, Taveta and Voi.

Personally, I am looking forward to a tour of the sites even if it will mean a long tour so as to experience the battlefields. 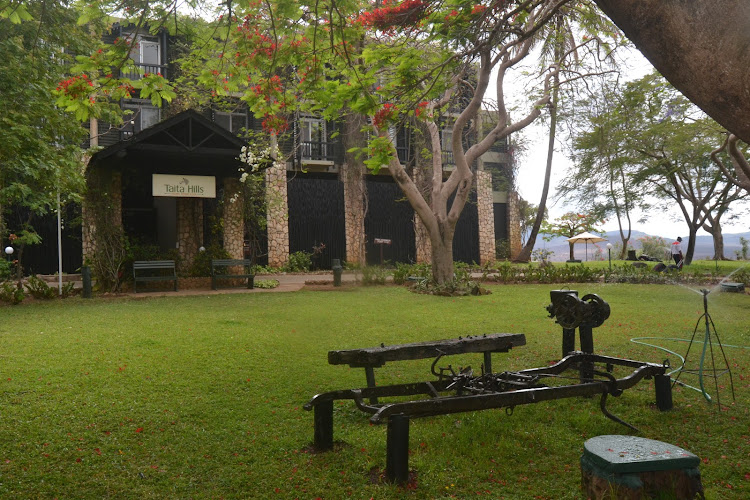 After a tiresome night from the Vuria hills and the lecture at Taita Hills lodge, it was time to drive to Mombasa for the final lap of our six-day itinerary.

We checked in at English Point Marina in Mkomani, Mombasa, one of the best tourism facilities facing Mombasa Old Town, but our mission was to be in time at Tamarind to experience their dhow dinner.

The dinner gives an experience even those who have been in Mombasa may not have had a chance to enjoy. Guests check in at 6pm and are ushered into the dhow by well-trained staff, who work in the dhow restaurant.

Once on board, guests are served with the famous 'dawa', which may be alcoholic or non-alcoholic for those who do not drink alcohol.

It is followed by sushi vegetables and samosa beef as things are made ready for the dhow to cruise.

Sunset can be viewed vividly at the dhow, and the cruising begins with entertainment from a band, which gives an experience that is amazing.

Prudence Nyambu, the Tamarind dhow restaurant manager, said they have two dhows that operate a restaurant. One is called Nawali and has a capacity of 70 guests, but it takes 65 people on individual booking.

The other one is called Burble and can seat 55 people, but due to Covid-19, they carry between 35-40 people.

At the beginning of the cruise, the coxswain uses an engine for several minutes then opens the sail for it to move freely using the natural winds.

"Such dhows are made of wood and are from Lamu. They were used for trading between Lamu, Mombasa and Zanzibar. Initially they used to have the sail clothes. When we bought it, we turned it into a form of excursion," Nyambu said.

She said they created the upper and lower decks, with the top one having a capacity of 20-30 people, while the lower carries about 30-35 people.

Nyambu, who has worked for over 16 years, says their strategy is to give customers a magical moment in the dhow.

The welcome drink dawa, she says, comprises vodka, lime, honey and ice, adding that if it's non-alcoholic, it has an option of soda water instead of vodka.

Once a client gets in the dhow, he or she is served with the starter, comprising  soup, followed by a main course and dessert.

"It's quite an excursion. People should not be left out when they come to Mombasa. They should be the first people to come on board the Tamarind dhow and also to promote local tourism because our market is mostly locals," she says.

Nyambu urged locals to come out in large numbers with their loved ones and families to enjoy the cruise.

At times they organise cocktail parties, wedding ceremonies and also party cruises, where they convert the dhow into a disco party.

The dhow dinner costs Sh5,500 for a four-course meal, while lunch costs Sh3,800 for a two-course meal per person.

Tamarind also has a lift to cater for people with disabilities, and a client only has to make arrangements and it's done.

The cruise begins at Old Town, goes to Old Port, Fort Jesus, turns back then under the Nyali bridge up to the end of Makupa creek, where one can see the Mangroves and the Makupa causeway.

During our cruise, one of the crew members wowed us by climbing up the mast of the sail and performing some acrobatic moves.

He could touch the underside of the bridge as we watched in excitement, while other passers-by on top of the bridge could also see the show in amazement.

For real, our trip was an amazing one, and this was just a sample of what Coast has to offer. There is plenty for tourists to experience from Kwale, Mombasa, Kilifi Lamu to Taita Taveta.

This festive season, I hope more Kenyans will come down to the Coast and have an experience like the one I did or even more than that, so as to enjoy the beauty of their country.