MARGINALISED FOR A CENTURY

Group does not want monetary compensation, just a community project to make amends 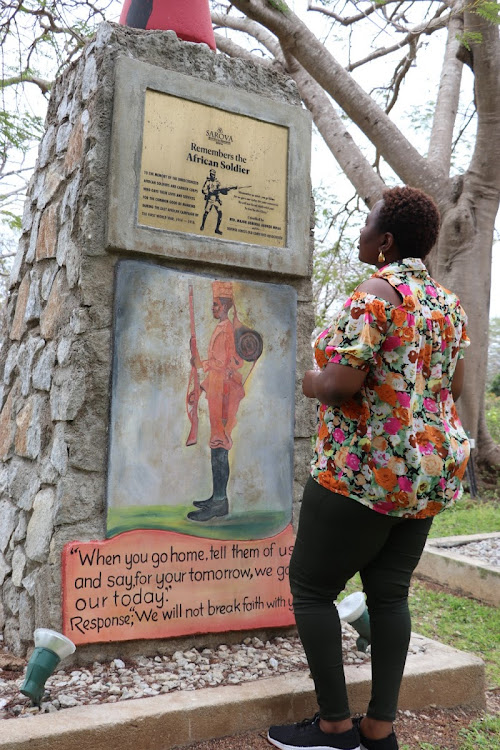 A domestic tourist at a monument erected in honor of African soldiers who took part in the WWI outside Taita Hills hotel on September 12, 2020
Image: SOLOMON MUINGI 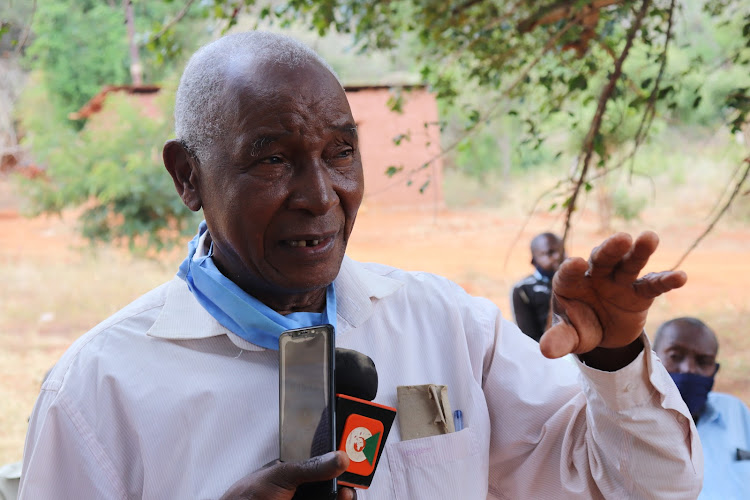 Kasigau elder and a retired chief Stephen Mjomba during an interview at Jora on September 9, 2020. He want the community to be compensated for forceful deportation
Image: SOLOMON MUINGI

In what would have been a densely populated and agriculture-rich area now lies little huts and expansive tracks of rangeland.

The Kasigau community has been marginalised due to the misery and suffering they underwent during their forced eviction to Malindi by the British colony more than a century ago.

Kasigau was one of the epicentres of World War I in the East African region. The war started in 1914. The first shot that signified its spread to the region was fired at the Taveta district commissioner's office on August 15 of the same year.

The deadly fight between British and German troops would later culminate in the expulsion of the Wakasigau from their ancestral land.

The Wakasigau are said to be the smallest of the three subdivisions of the Taita tribe, a northeastern Bantu group. They share a Shungwaya tradition of tribe origin within several of the East Coast tribes.

The four local Kasighau communities, namely Jora, Kiteghe, Rukanga and Makwasinyi, lived harmoniously until the eruption of the first World War on July 28, 1914. 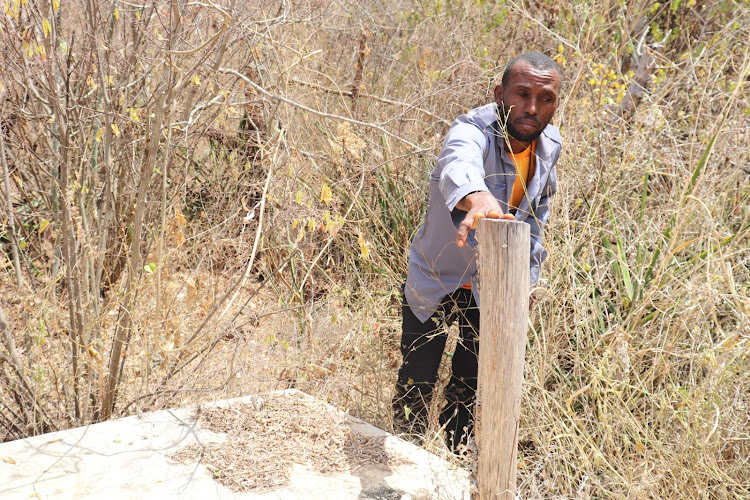 A Kasigau elder points at a mass grave where British soldiers were buried after German troops encamped a Britain garrison with heavy riffle in 1915
Image: SOLOMON MUINGI

History has it that, on August 12, 1915, a year after the outbreak of the global war, German patrol soldiers under Lt Freiherr Von Grote captured two villagers, Mwashutu and Kinona, while harvesting honey in the forest. German soldiers forced the duo to reveal where the rival British army had camped.

Joram Mwanguo, an elder, told the Star in an interview that the British government had established an army barrack at the top of Kasigau hill to fight the German soldiers in Tanganyika, now Tanzania. Germans were approaching to demolish the Mombasa-Kampala railway that British soldiers used to transport food and ammunitions.

The Germans would later write to the British administration in Wundanyi, telling them the local community willingly showed them where the Britain could be found.

Joram said the community was forced to walk on foot from Kasigau to Maungu town for several days without food and water. From there, they were loaded onto a train to Mombasa and thereafter into a waiting ship to Malindi.

“In September 1915, the British Governor Sir Henry Conway endorsed a report to have the Wakasigau moved to Pangani near Magarini, about 50km north of Malindi, following betrayal accusations,” Joram said.

Meanwhile, the Malindi locals were told the Kasigaus were a tribe of cannibals from Mozambique. The locals, trying to protect and defend themselves, poisoned all the water holes that were to be used by Wakasigau, killing hundreds of them.

Joram said the Kasigaus lived in Malindi for two years until 1917m, when they were allowed to go back to Mwatate and not their initial home ground for fear they would once more betray the British.

“Even after the bloody suffering, we were not allowed to go back home. We were taken to slavery in Mwatate,” Joram, whose grandfather was among the captives, said.

To scare off the Wakasigau, British soldier shot dead three elders in Voi. The three — chief Mwangojilo and elders Mwakuja and Mwadime — were forced to dig their own graves and then shot to death at Mwakingali estate on the outskirts of Voi town.

A British court in Voi had found them guilty of direct complicity with Germans in the September 1915 attack.

This would later lead to the ill-fated torture and eviction of the entire community. Hundreds of elderly people died of thirst and hunger due to long walk from Kasigau to Maungu.

After their expulsion, British troops used the Kasigau hill to set up a troop station as a way of controlling the Germans, who were aggressively pushing to change the Tanganyika border.

The British government had also established other camps at Mwashoti and Maktau in Mwatate to repel German combatants, who wanted to dismantle the Mombasa-Nairobi railway line.

By December 1915, the Kasigau hill had already been occupied by 13 Baluchis, whose camp had been set at Jora, facing the German border to the south.

I went atop the hill to see the remains of the now-ruined military camp. A long, winding road takes me from the bottom of the hill to the top. Huge trees have grown where the camp sat. The community has only settled on the foot, leaving the hill as a memorial site.

Confirming this cruel history, Stephen Mjomba, a community elder, recalled how the Kasigaus were used to clear the Mwatate sisal farm that was under Greek settlers.

The retired chief says the community was allowed to settle back in Kasigau in 1936, after decades in Mwatate.

“After a 22-year stay outside our land, we were allowed to come back. However, many Kasigaus were left behind in Malindi and Mwatate,” Mjomba said.

The hostilities and untold suffering at the hands of colonialists, Mjomba said, have contributed to the community’s ravaging poverty.

“We feel we have been left out. Since Independence, it’s now that we now have our first student studying law. We only have one medical doctor,” he said. 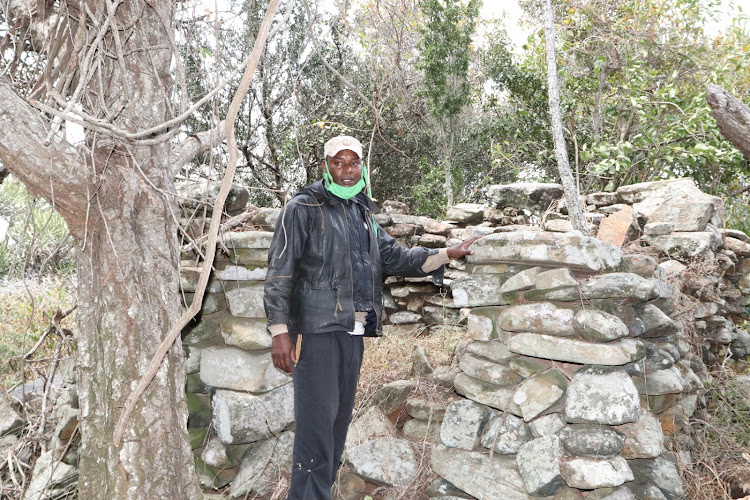 William Kibwanga at a nearly ruined British garrison atop Kasigau hill. It served 13 Baluchis, whose camp had been set at facing the Germany border to the south
Image: SOLOMON MUINGI

The British and Germans settled their score 105 years ago. They left the Kasigaus out of the process of reparation. Neither did they consider reconciliation to heal the community

The community is now demanding for compensation from the German and British governments. More than 800 innocent members of the community were moved to Malindi by the British colony, citing betrayal.

“The British and Germans settled their score 105 years ago. They left the Kasigaus out of the process of reparation. Neither did they consider reconciliation to heal the feelings of the Kasigau community,” he said.

He said the community has been left behind in developmental agendas, consequently increasing the level of poverty.

“Our people have been neglected by the government and little is allocated in this area. We, therefore, request the government to improve water and health infrastructure,” he said.

How much would the community ask in compensation? “We are not planning to ask for monetary compensation. We would like the colonial governments to build a community project that would benefit the whole community,” Mdamu answered.

“Tarmacking of the Maungu-Jora road would be a nice project that our siblings would live to remember. Let the British and German governments be compelled to also build a state of-the-heart technical school here.”

Another elder, William Kibwanga, said the community has sent a proposal to the two governments to compensate for the heavy casualties suffered.

The proposal also seeks to compel the state to recognise the three Kasigau elders who were shot and buried by the British government as Independence heroes.

“The state should build a monument at the Kasigau hill in remembrance of the trio. It is a way of honouring their effort to save the community,” Kibwanga said.

Wakasigau are among the few communities in Kenya who fell victim of both Germany and Britain during the WWI. Following the heinous attacks, some of the community members fled to the neighbouring Tanzania. Some live in Dalunyi and Maramba locations in Tanga Province, Tanzania.

Kibwanga said others were assimilated in Malindi, while others settled in Taru and Mwatate.

Shunned in Kenya and Zimbabwe, they can't trade legally or own property.
News
2 years ago
by SOLOMON MUINGI
Big Read
29 September 2020 - 05:00