• Arafa Baya has been doing sustainable development projects to save environment

• 'Dhow' hotel is so-called because it's shaped like one, 'floats' on the water in high tide 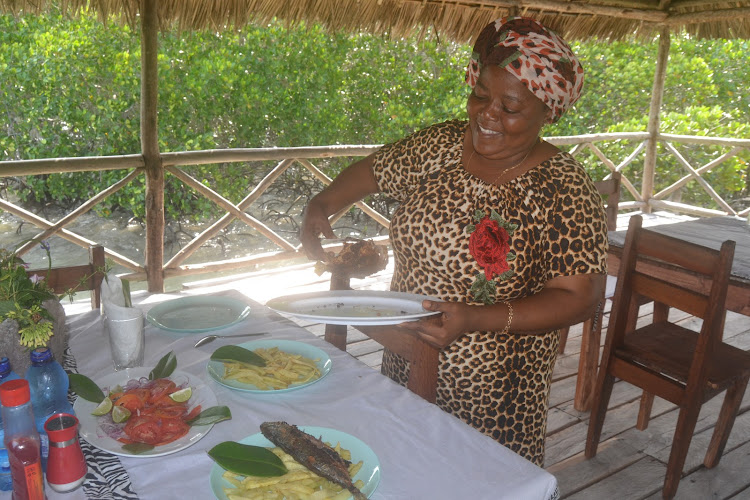 A renowned conservationist in Mida Creek, Kilifi county, has opened a restaurant at the heart of the mangrove protection area.

Arafa Baya, 39, the patron of Bidii na Kazi women's group, set up Dhow restaurant at the edge of the mangroves facing the beautiful scenery of the ocean and trees.

It's called 'dhow' because it has a shape of a dhow and usually 'floats' on the water during high tide.

The restaurant is an added attraction to excursions at the Mida Creek, which is globally known as an Important Bird Viewing Area, offering nature lovers the ultimate experience and taste of fresh food.

"We specialise in seafood fresh from the ocean, where one gets to enjoy not only the meal but the natural ecosystem that has been conserved by the community,'' she says.

The pandemic and its devastating impact on tourism has not stopped Arafa and her team from pursuing her vision.

The idea behind the ecotourism restaurant is to conserve the mangroves, which were endangered due to massive destruction by locals.

The restaurant is hidden and it is not until one walks through the swinging boardwalk near the end that they find a diversion to the restaurant.

The Bidii na Kazi women's group members do the catering, and one man acts as a canoe rider and a cook.

One can access the restaurant from the boardwalk or by canoe during high tide.

After a brief canoe ride, we taste a sample of the seafood, consisting of grilled fish fresh from the ocean and chips.

Before we eat, a group of domestic tourists from Nairobi who had toured the Creek come to the restaurant and right in time as the food is being served.

They order a meal for seven and even ask for ugali. "Our meals are fresh from the ocean. One can come here to enjoy nature and get a chance to eat our tasty meals," Arafa says. 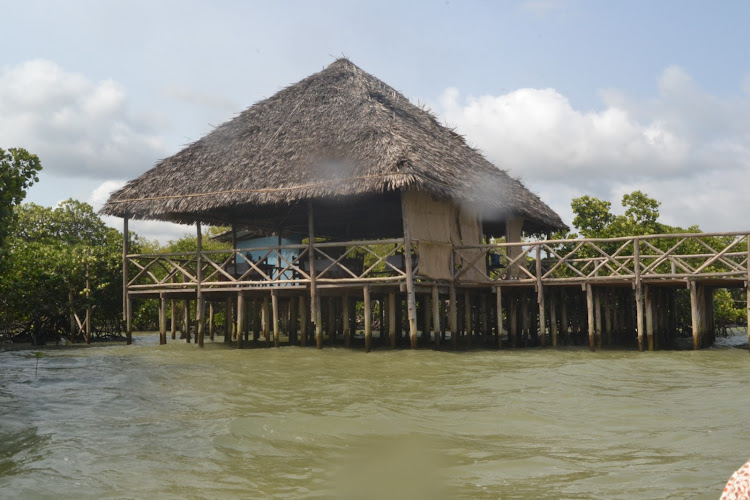 Arafa says the Dhow restaurant, though not fully complete but in operation, has a capacity to hold 100 guests.

It aims to enable the women to benefit from the efforts of conservation work through sustainable development projects.

They need about Sh500,000 to complete it, but due to the Covid-19 pandemic, it has been difficult for donors to support them.

Arafa has been doing conservation for 16 years and has been involved in the  successful restoration of the Mangrove forest.

Her passion for conservation began after seeing the extent of destruction of mangroves going on in the village.

This was driven by high poverty levels. People were cutting the mangroves for sale to get cash in return, not knowing it was a major threat to the environment.

"Having been born, brought up and schooled in this village, I came up with the idea of conservation. I mobilised youth to begin protecting the trees and nature," Arafa says.

Initially, she formed Mida Creek conservation and awareness group, composed of youth and only her as the woman.

After the group became stable a few years later, she formed the Bidii na Kazi women's group, which voluntarily made nurseries of mangroves to cover areas destroyed by loggers.

Being a woman from the Muslim community, it was difficult to deal with men or youth and convince them to do conservation.

But due to her passion, consistency and determination, she managed to sell the conservation idea, which up to date is a success.

More than 100 youths are benefitting directly from the conservation work in the creek, which has a good Mangrove forest cover and is bordered by the ocean.

Since the conservation work was voluntary with no financial return for years, she came up with the idea of setting up an ecotourism restaurant for the women to sustain themselves.

The construction began in July last year at a strategic location within the creek, where one has a clear glimpse of the fauna and flora of the creek.

The group also bought canoes for tourists to go for excursions in the mangrove channels and Islands within the creek for bird watching, viewing the different types of mangroves and enjoying sunset or sunrise.

As per the plan, the dhow restaurant was to be ready by January to start getting the fruits of their sweat.

However, the project was caught up in the corona pandemic. Donors stopped funding and they could not complete it in time. 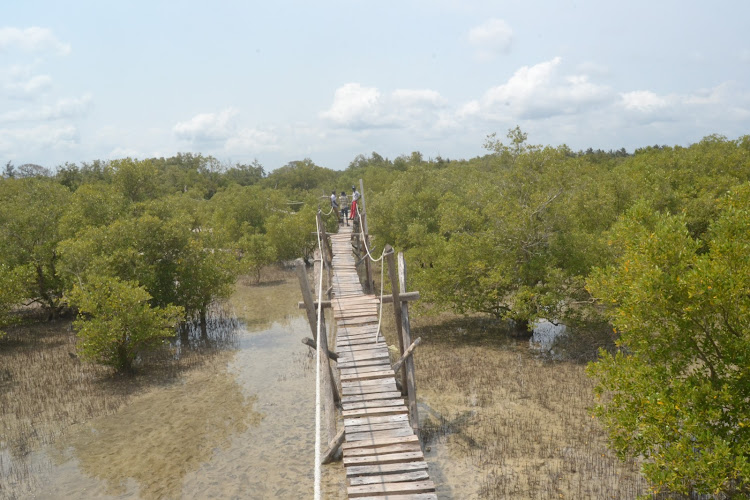 Every morning, Jali Kitsao the canoe rider wakes up and goes to the creek to transport tourists to the islands within the creek to see unique bird species and fish.

He says Covid-19 has really affected them because the tourism sector has gone down, with very few guests.

"We can stay for several days without receiving guests. In a day, we can get just one or two guests, but we do not lose hope," he says.

Kitsao, who was born and brought up in Mida, says they have four Islands in the creek.

The mangrove sites are breeding grounds for fish, and that's why the conservation has helped increase fish numbers.

The only hope for him is that the pandemic will end soon so normalcy can return and lure tourists back.

Despite the challenges, Arafa and her team managed to partially complete the restaurant, and it's now receiving guests.

"We would be grateful to see Tourims CS Najib Balala visit us to see the beauty of this place and help the world know about this area," Kitsao says.

They hope one day the President would visit Mida Creek and see the first Blue Economy projects being undertaken by the women.

Apart from the restaurant, the women also have organic farming projects and chicken rearing, which help them generate income.

The creek has a rich underwater heritage, which has already begun to be unearthed and will soon become a major tourist attraction.

Underwater archaeologists from the National Museum of Kenya established the area is rich in underwater heritage that dates back centuries.

With proper support, the conservation group can reap big from the blue economy to promote a good environment and empower the community.

As the saying goes, empowering a woman is empowering the whole community, as what goes to a woman reaches out to all.

She lived in a mud house and nurtured trees for 20 years, much to locals' bemusement
News
2 years ago
by ALPHONCE GARI Correspondent, Coast Region
Travel
18 September 2020 - 04:00