Why the days of 2G, 3G networks are numbered

Safaricom recently rolled out commercial 5G in race for speed

• Chinese smartphone vendors are driving down cost of devices that support 4G, 5G 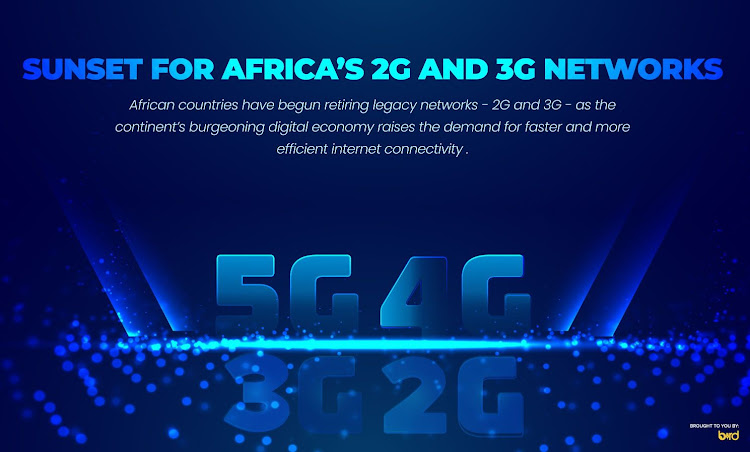 Governments and mobile operators are speeding up plans to shut down legacy networks as they navigate the high costs of transiting to faster and more efficient technologies.

Spectrum auctions, mobile financing arrangements and the mass roll-out of 5G networks are all seen accelerating the shift to high-speed networks across key markets on the continent. South Africa, Seychelles, Botswana, Ethiopia, Tanzania, Nigeria and Zimbabwe have rolled out commercial 5G services over the last two years.

“Many operators and governments are determining that the older 2G and 3G technologies as well as the spectrum allocated to them should be switched off for the faster and more efficient 4G and 5G networks,” he said.

South Africa announced it would switch off its 2G network in mid-2024 and 3G by March of 2025. In September, a draft policy document from the Independent Communications Authority of South Africa (ICASA) outlined the move as key to freeing up frequencies for 5G services.

Earlier in March, South African President, Cyril Ramaphosa underscored the importance of radio spectrum auctions and the country’s switch to digital television to free up ‘valuable radio frequency spectrum to be used in the provision of mobile broadband services and other applications.

Nigeria is planning to hold a second 5G spectrum auction this December to allow telecom operators in the country to expand access to high-speed networks.

The first auction conducted by the Nigerian Communications Commission was won by two telcos, MTN and Mafab Communications. So far, only MTN has launched commercial 5G in the West African country.

The Nigerian telecom regulator listed the digitisation of government services, the shift to e-commerce, e-learning, video streaming services, e-health and the use of robotics in manufacturing as key areas requiring faster Internet.

“There is a need for higher speed connections for data-intensive services required by modern communications devices to serve the Nigerian population,” it said.

Since 2015, Nigeria has seen its broadband penetration increase from less than 10 per cent to 44.49 per cent by July 2022, according to official data.

Kenya’s largest telco by subscriber base, Safaricom, recently rolled out commercial 5G in 35 sites in Nairobi and as well as four major towns after a successful pilot last year.

The operator is providing 5G WiFi to residences and commercial offices as a way to facilitate the gradual adoption of more 5G-enabled devices. 5G-enabled smartphones available in Kenya cost more than $1,000, putting them out of reach of the majority of the population.

Safaricom CEO Peter Ndegwa said, “The launch of 5G WiFi is the first step in empowering our retail and enterprise customers to start exploring new opportunities that 5G provides.”

In Nigeria, MTN is banking on device financing to lift up subscriber numbers for ultra-fast, Internet-enabled devices. In mid-October, the telco partnered with smartphone financing platform Intelligra, which helps individuals buy 4G and 5G phones and pay in instalments. From 2023, the operator expects to finance 1,000 units a day.

Chinese smartphone vendors are also helping drive down the cost of mid-range devices in Africa. The latest International Data Corporation figures show that the prices of mid-range devices fell some 22.3 per cent, helping to push the uptake of 5G devices on the continent by 26 per cent in Q2 of 2022.

Transsion – with its Tecno, Itel and Infinix brands – controls 48 per cent of Africa’s smartphone shipments and has been linked to a drop in the cost of handsets valued between US$200 and US$450. Samsung is placed second, with a 25 per cent market share, while another Chinese brand, Xiaomi, takes third place, with 6.6 per cent.

By the end of September 2022, the GSA, whose executive team includes Nokia, Huawei, Samsung, Apple and Ericsson, identified 142 operators that have either completed, planned or are in progress with 2G and 3G switch-offs in 56 countries and territories across the globe.

The association’s researcher, Jordan Cox, said in a webinar that the pace of sunsetting legacy networks in Africa is being slowed by a still-growing user base of these legacy networks in some areas, providing operators with important revenues, with the high cost of faster mobile devices hampering wider uptake.

“This is potentially pointing to a longer period or low level of sunsetting here in Africa,” Cox said.

GSMA, in its 2022 Mobile Economy Sub-Saharan Africa report, said that while 3G remains a dominant connectivity technology in the region and is expected to account for more than 50 per cent of connections until 2025, its overall share has begun falling.

“This year marks a turning point as 3G adoption begins to decline for the first time,” according to the GSMA report.

Post a comment
WATCH: The latest videos from the Star
by Conrad Onyango for bird story agency
Technology
11 November 2022 - 05:00
Read The E-Paper