Walter Nalwa says going through primary and secondary school was a miracle.

• In 2018, Nalwa worked as a casual labourer at different construction sites in Elgeyo Marakwet and Busia.

• Nalwa manages to balance leadership and school work and always makes sure that most of his school work is handled between midnight and 2am. 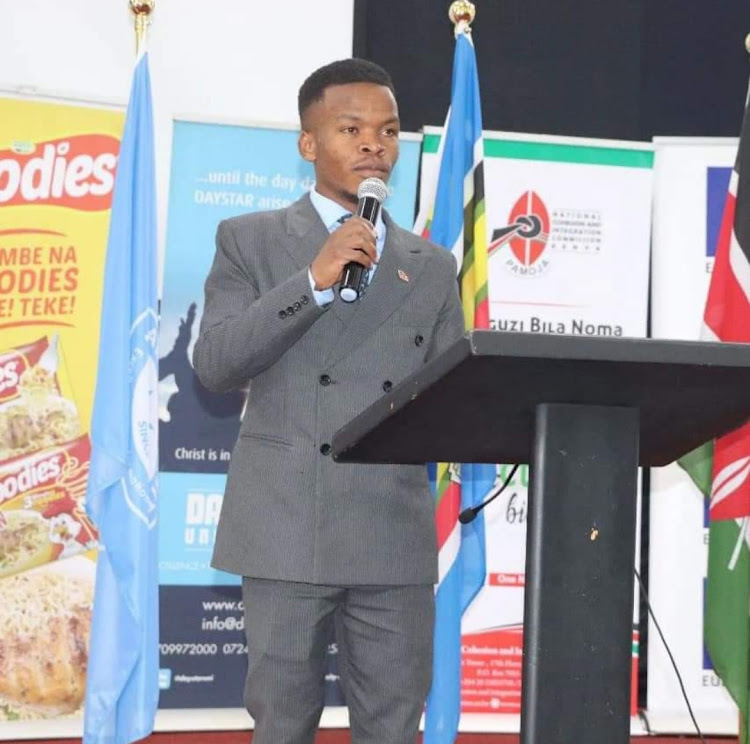 “No matter where you are from, your dreams are valid.”

“I once said that I would be president and my dream came to be. I am now eyeing an MP seat,” Nalwa said.

Born and raised in Bungoma county, in Sango village, nobody would have thought Nalwa would one day become a student leader at the university.

His journey has been one of many challenges but he couldn’t afford to give up because of one reason- he had a dream.

Hailing from a family of four, being the firstborn, Nalwa said his upbringing was tough.

His mother was a shopkeeper while his father worked as a peasant farmer.

To him, going through primary and secondary school was a miracle.

He later joined Homabay High School where sports was a huge part of his high school life.

“I survived on bursaries and sports sponsorships and here I am, at Daystar University,” he said.

“My interest in Daystar was driven by the love of sports and rugby star Collins Injera as he was an alumnus.”

Nalwa said that he pushed himself and made sure he ended up at the university.

He joined Daystar in 2017 but due to the lack of fees, he could not sit for his exams in his first and second semesters.

This plummeted his GPA scores to 0.02 and 0.06 during the first two semesters respectively.

“I was put on probation. I didn’t know where I could get school fees because I knew missing out on exams for another two semesters would result in me being discontinued,” Nalwa said.

In 2018, Nalwa worked as a casual labourer at different construction sites in Elgeyo Marakwet and Busia.

During that period, his contractor friend, whom he identifies as Bernard Ambani supported him by appointing him as his handyman ‘mtu wa mkono.’

He saved up some money and decided to go back to school.

“My friends, Barrack Khaseke, Cedric Oronje, Joash Olwaga, Maurice Kioko and Nicholas Atulo came looking for me. They supported me majorly by providing me with basic needs. This motivated me a lot,” Nalwa said.

During the pandemic, Nalwa stepped in and volunteered through the students for students initiative as the Students Council at the time was dormant.

He collected foodstuff and other basic necessities for needy students with an aim of ensuring they don’t drop out.

In 2021, through his service to the students, Daystar voted him the campus governor of social welfare and sports.

He served for one year before he was later voted in as president in 2022.

Nalwa considers his reign as one that impacts the school positively.

“I have revived dormant clubs within the school, associations and I continue serving the students of Daystar University through wisdom and humility from God,” he said.

Nalwa said he is not perfect but he wants to see his fellow comrades transformed.

“We are also reviewing our constitutions, student handbooks and policies that are affecting students and together with Daystar University Students Association, we are supporting the needy students," he said.

He also said he is happy to see that all sports teams and recreation activities are doing well after advocating for the construction of a gym and hockey pitch.

Apart from the service that he renders to his campus, Nalwa is involved in a number of activities.

He volunteers as a peace ambassador under the Global Peace Foundation. His peace campaigns involve conducting civic education, mediation and negotiation, and environmental conservation.

Nalwa serves as a programme manager at Deshcare International, a charity organisation and also mentors his fellow students to become better versions of themselves.

As a fan and great supporter of football, his mantra is teamwork and appreciating the diverse personalities of different people.

“I believe that anyone can be a leader and that a leader’s success is all about growing others and touching hearts,” he said.

“The world is great if we let others be great too.”

Nalwa balances leadership and school work by always making sure that most of his schoolwork is handled between midnight and 2 am.

During the day, he assumes his responsibilities as the school president.

He said that he has faced a lot of challenges and banked on people he knew to support him but most have failed him.

“You have to be strong and serve without expectations," he said.

He says his mentor—Daystar’s VC Laban Ayiro has been very impactful in Nalwa’s leadership journey.

Nalwa describes him as a man who listens and acts on students’ grievances.

“I love the way he does things. His entire journey motivates me," he said.

Coming from a poor background, Nalwa has learnt to be humble and treats people as they deserve. This he said makes work easier.

Apart from eyeing an MP seat, Nalwa looks forward to working with the United Nations and the African Union.

He credits his success so far to his supportive mother, father, grandmother and his close friends.

'I taught for four years in Garissa and enjoyed it'

Teacher Nyakweba had balked at Garissa but for 4 1/2 years he enjoyed it.
News
4 months ago

Edith Cherotich walks with storybooks and reads with kids
Sasa
3 months ago
Post a comment
WATCH: The latest videos from the Star
by ABIGAEL WAFULA
Society
04 January 2023 - 15:45
Read The E-Paper