Darkness and despair hit SA as power and water disappear 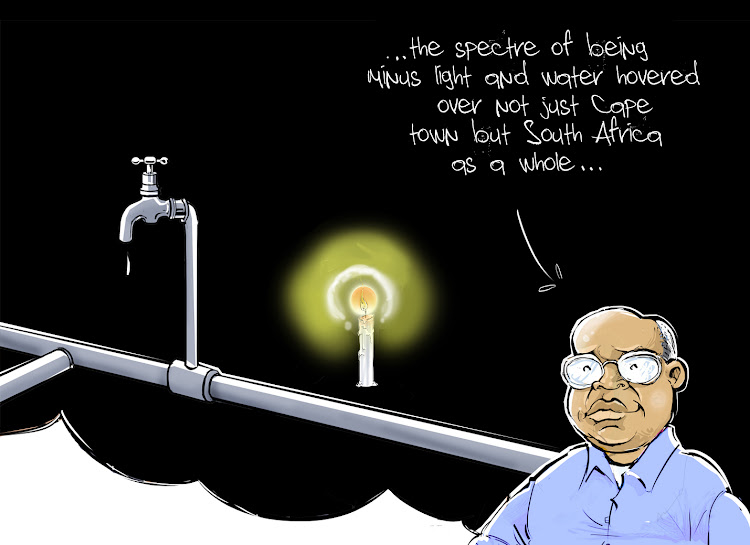 Experience, said the sage, is the best teacher. The Wahenga would expound on this and add that as humans, we don't generally tend to fully appreciate or understand something until we have experienced it ourselves.

For instance, it is all very well to read a recipe for making ugali, but until you are at the stove with the boiling water, the maize flour and the mwiko, you have no idea what it is really like.

If you are an ugali connoisseur, you will know what I mean.

That said, this piece is not about ugali necessarily, but about having lived through the experience of Nairobi in the year 2000, when a scorching drought forced the authorities to ration both water and power.

Those of us who were there and survived the severe water and electricity crisis of those times can probably survive anything the world throws at us, at least as far as getting by with little to no water and power is concerned.

It is also about having survived Cape Town’s countdown to Day Zero in 2018, when the city’s taps were meant to run dry.

I remember at the time, the authorities here were painting a dystopian picture of every household in a city of four million having to queue up at one of about 200 water distribution points for water.

There was even talk of calling out the military to assist the police in peacekeeping at these places.

This last week, the spectre of being minus light and water hovered over not just Cape Town but South Africa as a whole.

In just 24 hours, the national power utility, Eskom, implemented Stage 6 of what they call load shedding but the rest of the world understands as power cuts, and the National Energy Regulator of South Africa (Nersa) approved Eskom a 18.6 per cent tariff increase.

What Stage 6 means is that power cuts are scheduled over a four-day period for four hours at a time. In practice, you have a day like today when power was absent from 6am to 8:30am, from 2pm to 4.30pm, and then from 8pm to 12:30am.

What the tariff increase means is that we will be paying more for the stuff we are not getting enough of, electricity.

To say South Africans were annoyed at this state of affairs, would be an understatement. The country is outraged at having to fork out more for a service that doesn't deliver half of what it should.

The moves by Nersa and Eskom felt like a slap in the face of consumers, workers and businesses alike.

Most say it is unaffordable and that they are sickened at the prospect of another 12.74 per cent increase next year.

As if this were not bad enough, Cape Town’s city council has warned that the prolonged, high stages of load-shedding are having an impact on water supply operations in the city, notably in the hilly neighbourhood areas where water needs to be pumped to get to people’s homes.

The challenge is that reservoirs are not able to fill up fast enough because of the prolonged period of load-shedding, while residents are also using lots of water at the same time.

As such, Capetonioans have been urged to do their part to help by using less water to reduce the Metro’s collective water use to 850 million litres per day.

We have also been told that using less water will help deal with operational challenges, notably due to heavy load-shedding, which are impacting on the city’s water treatment plants and ability to convey good quality drinking water to reservoirs and areas across Cape Town.

It’s not going to be pretty, but fortunately, the lessons learned about living with no electricity and no water at the turn of the century, as well as more recently with Day Zero, will now be useful for survival.

Post a comment
WATCH: The latest videos from the Star
by Mwangi Githahu Columnist
Lifestyle
22 January 2023 - 05:00
Read The E-Paper