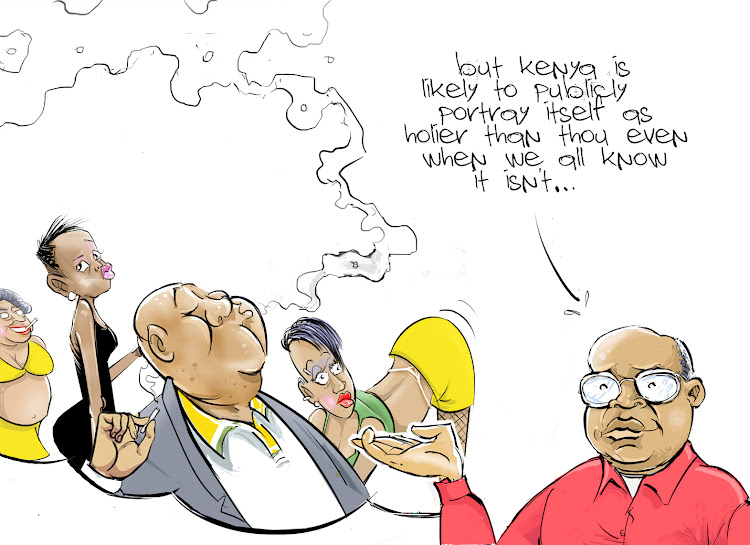 Like all African countries, South Africa has its share of problems. Currently, it is being forced to ration electric power, the political scene is a mess and racism and xenophobia continue to be major issues.

Nevertheless, despite being one of the youngest democracies in this beloved containment of ours, South African laws and lawmakers sometimes display a maturity that other countries would do well to imitate.

For instance, amidst all the noise around his buffalo-selling scandal, President Cyril Ramaphosa’s Cabinet recently approved the Criminal Law (Sexual Offences and Related Matters) Amendment Bill of 2022.

This bill repeals the Criminal Law (Sexual Offences and Related Matters) Amendment Act, 2007 (Act 32 of 2007) to decriminalise the sale and purchase of adult sexual services.

In simple English, sex workers could soon go about their business without worrying about arrest and prosecution as the government is backing a parliamentary Bill seeking to decriminalise sex services.

The proposed law if passed, as part of a list of interventions proposed as part of the National Strategic Plan on Gender-Based Violence and Femicide, would protect sex workers against abuse and exploitation.

The next step for the Bill is public participation, where members of the public will be invited to share their views on it, and this stage will then give way to the parliamentary processes.

If the Bill is passed, the records of sex workers will be expunged and labour laws will recognise sex work.

The public participation is not expected to be smooth sailing, as the various faith lobbies and other “guardians of public morality” will fight very hard against it, but the prognosis looks good at this point.

I couldn’t imagine a similar Bill making its way through the Kenyan Cabinet, let alone the Parliament, where the full-on hypocrisy of members of both institutions would make itself known before anyone else even had a chance to put in a word edgewise.

Even if for whatever reason the matter were to come up in Cabinet, I can’t see any of the members braving the wrath of their President or the Deputy along with the combined forces of the powerful religious lobby to push such an agenda.

All the God-botherers would come together and make so much noise and threaten so much violence that anyone who dared speak in favour of such a movie would find themselves painted as the devil incarnate.

Another scenario where I have trouble imagining a mature response to the issues would be in the process of legalising the cultivation and sale of cannabis.

Here in South Africa, the government some years ago recognised the cannabis sector has a huge potential for the Small, Medium and Micro Enterprises (what we call hustlers in Kenya-speak) located in the rural areas, where poverty is concentrated.

It is not alone on the continent. Zimbabwe, Malawi, eSwatini, Zambia, Uganda, Rwanda and Ghana have all, to varying degrees, also authorised cannabis production.

But Kenya, which likes to publicly portray itself as holier than thou even though we all know it isn’t, has yet to take a serious step in this direction, even though it has the potential to relieve the crushing poverty of so many of our people.

Just recently during an Agriculture and Land Summit, whose aim was to identify gaps and explore opportunities in the agricultural sector value chain, a South African government minister said the cultivation and commercialisation of cannabis production could generate an estimated R28 billion and create up to 25,000 jobs across the sector.

Probably much more economic stimulation than the much-touted Hustler Fund could realistically generate.

Kenyans who know about these things will tell you that cannabis is commonly available across the country, and while I don’t agree with the campaign rhetoric of former presidential candidate George Wajackoyah that the growing of marijuana would enable the payment of the country’s debt, it would certainly boost the economy.

I have also heard anecdotally over the years that Kenyan marijuana is some of the world’s best, especially varieties grown around Mt Kenya and in Kisii.

Imagine a rural economy that encouraged the growing of cannabis, and the agro-processing of cannabis for markets both domestic and abroad?

No political goodwill to uplift sex workers
Post a comment
WATCH: The latest videos from the Star
by Mwangi Githahu Columnist
Lifestyle
18 December 2022 - 05:00
Read The E-Paper