What history can teach today’s MPs

• A look back at the general election of November 9, 1979 is instructive to legislators 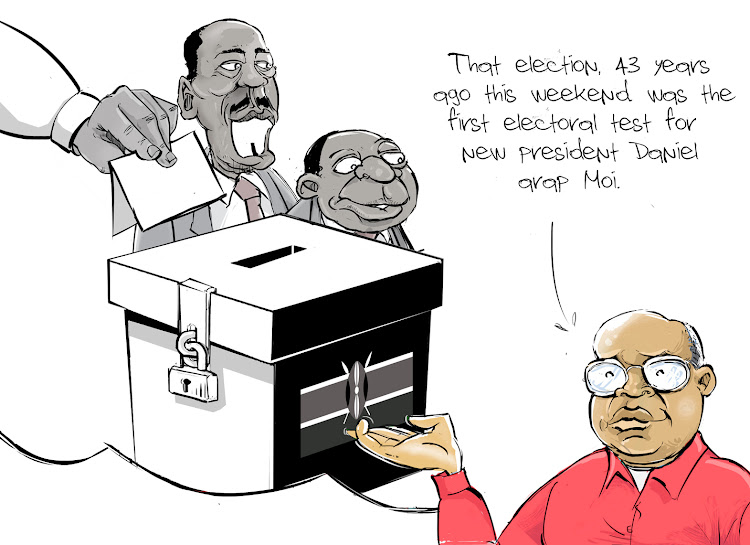 It is doubtful, but if any of the politicians Kenyans elected this year regret some of the promises they made to voters, they probably wish it was November 1979 and they were one of the eight men who walked straight into the fourth Parliament unopposed.

That election, 43 years ago this weekend, was the first since the death a year earlier of the country’s founding President.

Also, despite the country being under a de facto one-party system, it was the first electoral test for new President Daniel arap Moi.

Moi and his vice presidential pick Mwai Kibaki were among the eight who were nominated to Parliament unopposed.

Looking back, it probably would have been difficult at the time to find people who could have given either of the two a run for their money at that particular time in the country’s history.

Each of the remaining six unopposed candidates from that year would go on to make history in one way or another.

First, there was the man who, for most of the Moi era, save for a blip between 1991 and 1997 when he was under a a very dark political cloud, was the power behind the throne.

The man who, during his time at the top, would garner several nicknames, including Total Man, the Bull of Auckland, Mr Fix It and Karnet (steel), was not particularly well known in 1979.

The former district officer had been unsuccessful at his first electoral bid in 1974 but had risen speedily through the the ranks of the civil service, becoming Deputy Permanent Secretary in the Office of the President in 1978 after Moi’s elevation to the presidency on Kenyatta’s death. That was when those who had paid attention to such things say they knew the man was destined for great things.

The other very powerful man who sailed through that election unopposed was Justus ole Tipis, who, until he was outshone by William ole Ntimama, was the kingpin of Narok politics, counterbalanced in Kajiado by Stanley Oloitiptip.

As Kanu national treasurer in the days when Kanu reigned supreme as mama na baba, Tipis was part of a triumvirate (the others being Robert Matano and Kanu national organising secretary Nathan Munoko) through whom it was said the party carried out Moi's directives.

Next on the list was Francis Tuva, who made history as one of the longest-serving MPs in the political history of the Coast region. Tuva served as the MP for Malindi Town for a record 25 years, being elected at the dawn of Independence and only losing the seat with the restoration of multiparty politics in 1992.

Then there was Mau Mau veteran Gitu Kahengeri, who made electoral history a decade earlier in 1969, when he was elected the first MP for Juja constituency.

Juja had been hived off Gatundu constituency, represented by founding President Jomo Kenyatta.

In 1974, Kahengeri lost his seat to Kenyatta’s son, Peter. Some claimed voters had been intimidated by the Kenyatta clout into voting for the President’s son, but adopting the motto Msiogope (have no fear)  Kahengeri prepared to tackle Muigai again in 1979, but fate had other plans.

Peter died just before the election, and the electoral commission declared Kahengeri unopposed. Sadly in 1983, he lost his seat again, this time to Mama Ngina’s Kenyatta's brother, George Muhoho.

There was also Peter Ejore, known to some as the lion of Turkana. He had already run unopposed in 1974 and continued being elected by the good people of Turkana until he died in 1992, about 10 months ahead of that year’s return to multiparty elections.

During the single party era, he couldn’t put a foot wrong electorally, but once the return of pluralism happened in 1992, that was the end of Katurkana as far as being an MP was concerned.

Post a comment
WATCH: The latest videos from the Star
by Mwangi Githahu Columnist
Lifestyle
06 November 2022 - 05:00
Read The E-Paper