When married couples get into power

• Should there be a separation between marriage and government positions? 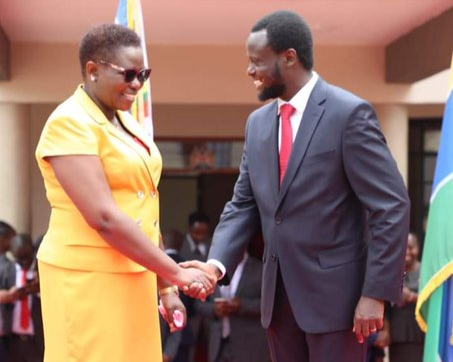 From attending official meetings with the governor to his appointment as head of the youth service, Meru county's First Gentleman's role in the new county administration is attracting compliments and criticism in equal measure.

For those who don't know what's a First Gentleman, he is the male equivalent of a First Lady. Murega Baichu, the husband to first-term Meru Governor Kawira Mwangaza, has taken up his role as First Gentleman with a gusto not seen since county governments were created almost 10 years ago.

He accompanies his wife to most official functions and has been appointed patron of the Meru Youth Service. Governor Kawira has clarified her husband will not be getting a salary from the county government in his role.

An accomplished musician, Baichu entertained the crowd at his wife's inauguration ceremony on August 25. In response to critics, Kawira attributes her political success to Baichu's "magical guitar".

"You are the only person who believed in me when no politician would stand by me and campaign for me. Through your talent, I was able to hold campaign rallies and visit home to home," Kawira said soon after winning the gubernatorial race.

A lot has been said about Governor Kawira's style of leadership, and this article will not delve into that. What's important is the discussion on how husband-wife teams work together in political leadership. Should there be a separation between marriage and government positions? It is often said that two become one when married, but does that analogy also extend to state offices?

It turns out that a spouse's support is crucial for political success. While celebrating his wife's birthday on August 24, former Prime Minister Raila Odinga praised Ida Odinga as the best thing that ever happened to him.

"On each of your birthdays like today, I reflect on how you are by far the best thing that ever happened to me. Your strength, resilience, wisdom, and prayers have brought our family this far," Raila said.

Meanwhile, President William Ruto credits his political success to the prayers of his wife Rachel. "I want to thank my wife, family and many other praying warriors in Kenya. I have been prayed into victory," President Ruto said soon after the August elections.

In 2016, Ruto talked of his wife's support as he fought to clear his name at the International Criminal Court. The then Deputy President said he often found Rachel praying for him well after midnight.

Prime CS Musalia Mudavadi has also praised his wife Tessie for being a pillar of the family as his political career regularly took him away from home when the children were growing up.

It's not only male politicians who need their spouses. Female politicians, too, have described how their careers were shaped by the backing they got from their husbands. Homa Bay Governor Gladys Wanga described her husband last February as the cock of the homestead.

On his part, George Wanga told his wife's supporters that he fully supported her gubernatorial ambitions. "I have released my wife to serve you people. I want to request that you take care of her on my behalf," he said.

Kirinyaga Governor Anne Waiguru was quoted praising her husband Kamotho Waiganjo after she was re-elected in August. "I want to thank my husband. He is the very best husband anyone can have. My pillar and my strength. Whenever you tell me that I am calm, it is mostly because of him," she said.

Gachagua to Azimio: It's our turn to eat first

A report by the Uongozi Institute in neighbouring Tanzania confirms that support from spouses is critical for the success of female parliamentarians. Conversely, lack of support, particularly from spouses or husbands, can limit the participation of women in politics. The support comes in the form of financial assistance and help with traditional roles, such as raising children.

Agripina Buyogera, a Tanzanian MP, narrates in the report how her husband supported her emotionally amid falsehoods spread by her opponents. "My husband encouraged me. He told me to go and face them (the opponents), not to cry in front of the crowd and not to show weakness," she said.

Subira Mgalu, a young woman politician, said she would have found it difficult balancing her roles as a district commissioner, MP, mother and wife were it not for her husband. "For us young mothers, politics is not supportive, and if you are not supported by your own spouse, it really becomes a challenge to balance the multiple roles," Mgalu said.

Male politicians, too, have thrived thanks to their wives as former Kieni MP Kanini Kega told KTN News in April. His first attempt at electoral politics during the 2007 general elections flopped, leaving him penniless. To make matters worse, Kega had invested family funds into his election campaign without consulting his wife. Lucky for him, all was forgiven and the couple subsisted on the wife's salary as Kega got back onto his feet. He now advises young politicians to involve their spouses when making political decisions.

As Suna East MP Junet Mohammed was involved with his party's presidential campaigns throughout Kenya, his constituency re-election bid was run by his wife Dekah Jamaa. Dekah surprised many with her fluency in the Luo language despite coming from a different ethnic group.

Kisii Governor Simba Arati's wife, who is of Chinese ancestry, also wowed crowds with fluency in her husband's language. She has adopted the local name Kwamboka. Further afield, former Bungoma Governor Wycliffe Wangamati confirmed to supporters that he relied on his wife Caroline's voter mobilisation skills and campaign strategies.

Dr Meena Bose, a US-based political scientist, admits there are no clear rules governing how spouses of elected officials influence their partners. Writing in the New York Times, Meena said the degree of a spouse's involvement will depend upon the personal relationship with the elected official.

"In general, elected officials need to be attentive if advisers or the public express concern that a spouse is overly involved," Meena says. She urges elected leaders to set clear roles for spouses and to explain these roles to staff to avoid complications. In that sense, Governor Kawira made a positive step by giving her husband a formal role in the county government.

In traditional African society, anyone aspiring for leadership had to be married. Perhaps our ancestors recognised that couples bring something into leadership by complimenting each other's personalities. 2,500 years ago, Chinese philosopher Lao Tzu gave his thoughts on the subject of marriage.

"Being deeply loved by someone gives you strength, while loving someone deeply gives you courage," he said.

Post a comment
WATCH: The latest videos from the Star
by GODFREY KIMEGA Communication Professional
Lifestyle
05 November 2022 - 07:00
Read The E-Paper