The day Ruto lost to Raila 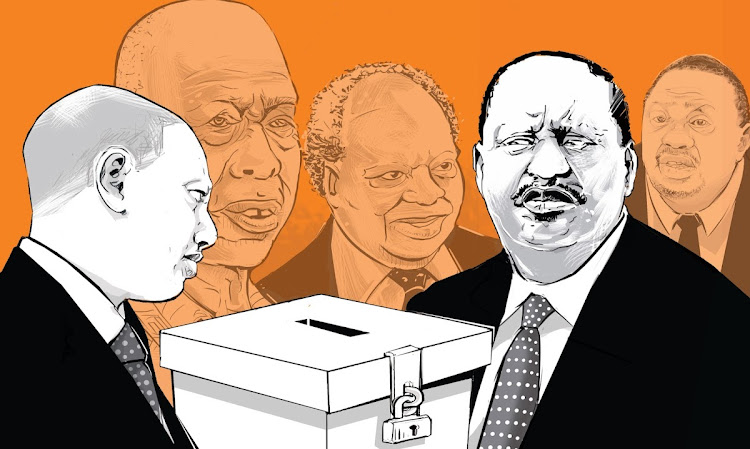 This time next week, assuming the election on Tuesday goes well and that the aftermath is just as lacking in excitement, the new residents of State House will probably be busy settling down or perhaps redecorating.

We, the ordinary Kenyan voters, will have recovered from election fever and will be getting on with our lives sans the hue and cry of the incredibly long campaigning seasons we seem to have.

I’ve said it before in these columns; I am not a soothsayer, so I will make no predictions. But as I love history and the things it teaches us, I will tell you a story from August 2007.

I came across the story quite by chance as I was trolling through my files looking for some notes on the fate that befalls almost all liberation movement political parties after they have been in power too long.

The story from August 2007 shows the fluidity of Kenya’s politics and its politicians.

It was just a couple of years after the time of oranges, bananas and watermelons, and a few months ahead of the abortion that was the 2007 election.

How Kanu is heading for a century of rule

Uhuru Kenyatta was Kanu chairman, William Ruto was Kanu secretary-general but at the same time had declared as a presidential aspirant in the Orange Democratic Movement (ODM), which was in the process of mutating into a political party.

Kanu stalwarts in the Rift Valley, led by one of former President Daniel arap Moi’s besties, the Eldoret businessman and a former nominated MP Ezekiel Barngetuny, were still smarting from what they saw as ODM leader Raila Odinga’s political betrayal during the short-lived Kanu NDP merger of 2002.

For Barngetuny and company, anyone cavorting with Raila might as well be dancing with the devil, and it didn’t help that Ruto, with the help of Henry Kosgei, was pulling the rug from under Barngetuny’s feet within the Nandi community and in Eldoret.

Anyway, fast-forward to 2005, Kanu has taken its revenge on Kibaki by joining forces with disgruntled members of his government, led, funny enough, by Raila, in the referendum, which saw Kibaki slip on his own banana peel and fall out with half his government.

Ruto, having seen the way the wind was blowing, had hitched his wagon to Raila’s train and was a member of the ODM “pentagon”. He told Bargetuny and the old Kanu guard that he would not quit his position in Kanu and that the party would be dissolved, as would the LDP, and together, they would become the ODM party.

For old Bargetuny and Moi’s supporters in Kanu, this was the final break with Ruto and the beginning of a rapprochement with Kibaki that would eventually see members of Kanu join Kibaki’s Government of National Unity.

For Ruto, the contest for ODM presidency was the first time he had ever run against Raila. When the party members voted, Raila came out on top, followed by Musalia Mudavadi. Ruto came third.

Meanwhile, here in South Africa, the future of the ANC is not looking too bright. As I write this, the party is just wrapping up its Policy Conference, the first since it dropped below 50 per cent in terms of nationwide support at last November’s municipal elections.

Things are looking dicey for the party that previously boasted that it would leave power only when “Jesus comes back”.

Opposition parties came together in a coalition and ousted the ANC from the leadership of the City Council in Nelson Mandela Bay. They are smelling blood and could hope to repeat that unity in 2024, when the next General Election comes around

On her way to the policy conference, one of the party’s leaders here in the Western Cape, where the ANC has been in opposition for more than a decade, said it was high time that the ANC took the learnings from the Western Cape, as it increasingly became the opposition in other provinces.

Perhaps the ANC should look at the histories of Kanu and other African liberation movement parties and start smelling the coffee.

Even after 57 years of independence, we still vote on tribal lines!

To us, Moi was a rumour, Kibaki a shadow, Uhuru a wake-up call

By MARTIN OMBIMA @OmbimaPatrick
Read more
Baba, I need a job. Where do I apply?
Post a comment
WATCH: The latest videos from the Star
by Mwangi Githahu Columnist
Lifestyle
07 August 2022 - 05:00
Read The E-Paper