Why South Africa is reeling from boozing and gun violence

23 people, mostly young men, are shot and killed every day in SA 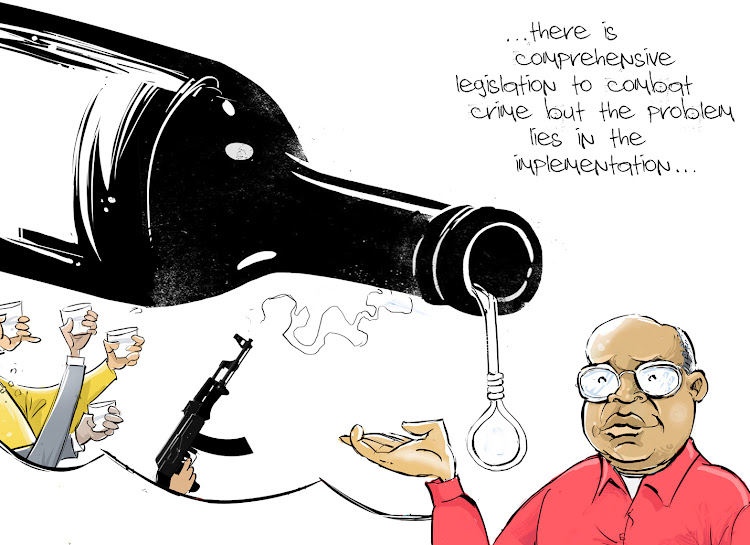 When in the first week of July 21, young people died at the Enyobeni Tavern in the Eastern Cape, the knee-jerk reaction of political leaders was to call for the immediate shutting down of the tavern and to talk of increasing the legal drinking age from 18 to 21.

While I understand the urge to be seen to be doing something, I am also reminded of the words of Sir Humphrey Appleby: Politicians like to panic. They need activity; it's their substitute for achievement.

I am not generally a gambling man, but I would be happy to bet the pump price of a litre of petrol, in either Nairobi or Cape Town, that in a few weeks' time, the latest calls to revive the scarecrow-like 2016 Liquor Amendment Bill will be forgotten as the news cycle moves to some new outrage.

As its title suggests, the Bill was first suggested six years ago, when I believe there was another national outrage about underage boozing.

As well as the age limit, among the changes the Bill wants brought in are the banning of any alcohol sales and advertising on social and small media and the introduction of a 100m radius limitation of trade around educational and religious institutions.

The Bill, which keeps being dusted off and then finding its way back to the shelf, reminds me of the Bard’s words in Macbeth in that it is a lot of “sound and fury signifying nothing”.

Underage drinking has been a phenomenon ever since people came up with age limits for alcohol purchase and consumption. You could have the strictest laws in place, but enforcing them would always be a problem as there will never be enough cops for the job.

'One bottle won’t hurt' - Your brain has a different opinion

Drinking one to two alcoholic drinks a day is an equivalent of brain ageing of two years.
Sasa
5 months ago

Also humans, and particularly young ones, thrive on finding solutions to, or ways around, problems, and believe you me, this would be an easy one.

If you want to prevent young people from using alcohol, especially when they are celebrating the end of exams or school (like some of the ones in the tavern were), give them worthwhile options and at the same time, set the example for them.

If all they see is people popping corks in celebration, and turning to drink whether to drown sorrows or to celebrate, those are the examples they will try to follow.

Legislating against alcohol never stopped people drinking it. Ask the Americans about prohibition if you don’t believe me.

Opening up a young South Africa

Meanwhile, away from South Africa’s problems with alcohol, there is the sobering issue of gun violence.

If South Africa resembles the USA in any way apart from the racial prejudice thing, it's in the fact that both countries have similar problems with gun violence.

In the last couple of weeks, 21 people were shot and killed and 20 injured in three separate shootings at taverns in Gauteng and KwaZulu-Natal.

Terrible as those shootings were, mass shootings are a regular occurrence here in the Western Cape.

In June, the police confirmed that four people were shot at a supermarket in Khayelitsha. Three died in the shop and the fourth later at a hospital. The motive for the shooting remains unknown.

The Western Cape politician in charge of police oversight reported that since March this year, and including those four murders, 26 people had lost their lives in mass shootings in Khayelitsha, and that since September 2020, 51 people had been fatally shot in Khayelitsha.

The anti-gun lobby says the country has a gun violence epidemic, and that while gun massacres are shocking, 23 people, mostly young men, are shot and killed every day in SA.

Some say there is comprehensive legislation to combat crime, but the problem lies in the implementation.

Others say criminals no longer fear the police and are not deterred by the inadequate punishments imposed by the courts if and when they are arrested.

Nobody is clear on what to do. Meanwhile, the killings continue.

Married to alcohol? Here is how alcohol affects your body

A few seconds after your first sip, alcohol starts to change how your body works.
Sasa
2 months ago
Boozing at petrol stations catches on in South Africa
by Mwangi Githahu Columnist
Lifestyle
24 July 2022 - 05:00
Read The E-Paper