Is storing tomatoes in the fridge bad for you?

Inspect stored tomatoes at least once a week and remove those with signs of bruising, mold, or decay of any kind.

•Inspect stored tomatoes at least once a week and remove those with signs of bruising, mold, or decay of any kind.

•Armed with this knowledge, the researchers are now looking into the possibility of creating tomatoes that don’t lose this ability in the cold. 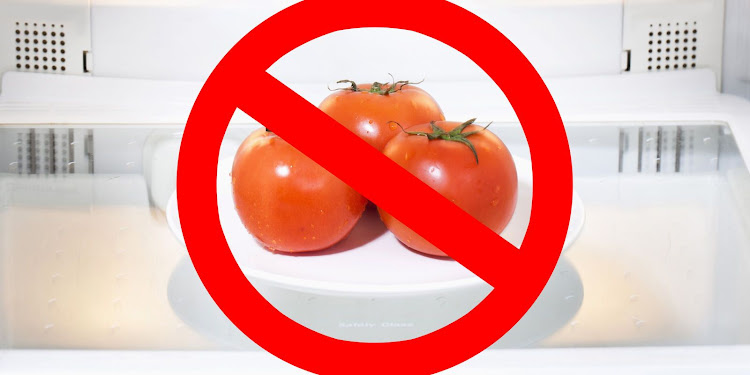 If you are willing to sacrifice the natural taste of tomatoes, then storing them in the fridge is probably a good idea for you.

New research published in Proceedings of the National Academy of Sciences reveals that cold temperatures prevent the critical flavor-enhancing genes that give the fruit or vegetable their taste.

Though it is a prevalent theory that tomatoes should not be kept in the fridge, there are some exceptions to this rule.

While Cook's Illustrated explains that keeping tomatoes in the fridge can alter their texture and dampen their flavor, sometimes using the fridge may be a good option.

Storing them in the fridge extends the shelf life of agricultural products like tomatoes, spinach, and bell peppers, among other items, there is an important trade-off to consider: Taste and that they also, get soft and mushy.

That study, which was conducted by researchers from the University of Florida, Cornell University, and several other institutions, explains why commercial tomatoes which are often preserved in low-temperature storage, often tend to be bland.

Armed with this knowledge, the researchers are now looking into the possibility of creating tomatoes that don’t lose this ability in the cold.

Don’t wash them: Never wash the tomatoes until you are ready to eat. Washing them before storage exposes them to extra moisture that may accelerate the growth of mold. If they are very dirty, rinse them and pat them dry, before storing.

Don’t pack them together: Packing tomatoes together reduces the airflow, and this accelerates ripening. Tomatoes are very delicate, especially when ripe.

Store them in zip log storage bags: The culinary prep method called concassée, from the French concasser or “to crush or grind” is a rough chop that can be applied to a variety of vegetables, most often seeded and skinned. After the procedure, ensure you push all the air out before storing them in the fridge. If they are not ready for use, you can store them in your fridge.

Store them on your countertop: Storing ripe tomatoes upside down (stem-side down) on paper towels in an open container such as a shoebox, or a cardboard flat.

Blocking where the tomato's stem was, prevents moisture from leaving the tomato and blocks air (and thus mold and bacteria) from entering the tomato.

Inspect them: Doing so limits the damage from spreading to others in the batch. Even blemish-free tomatoes sometimes develop bad spots while they are in storage.

Inspect stored tomatoes at least once a week and remove those with signs of bruising, mold, or decay of any kind from the rest of the batch.