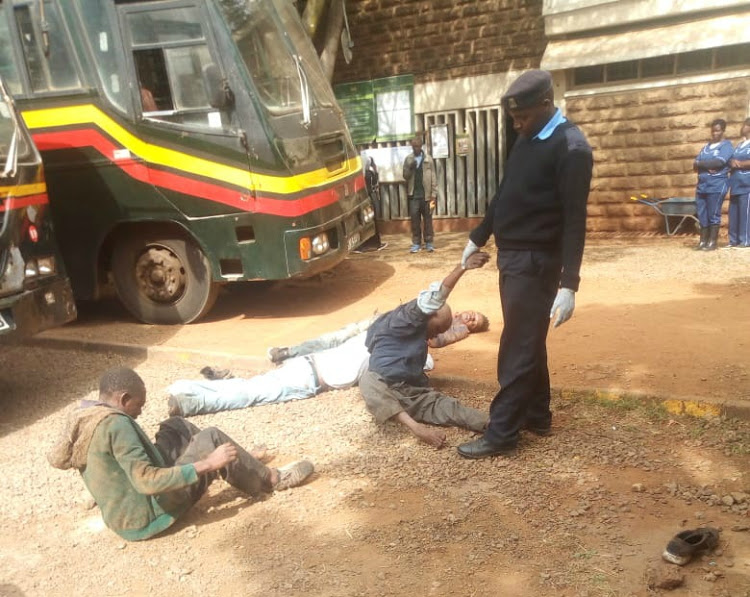 The suspect was too drunk to take plea
Image: CLAUSE MASIKA

Today, most of the popular hit songs in the Kenyan music scene are about going out to parties and getting drunk. A testimony of how much this is popular in this day and age. Paul and his schoolmates were on a night out doing exactly this when things went south in a way they could never have imagined.

In their company was Morsell, a man who became very aggressive whenever he was drunk. In his sober state, Morsell was very quiet and timid. Up until intoxication set in. He would pick fights with everyone, be abusive, be rowdy, name it. He would always be taken back to the school hostels in a taxi, too drunk to comprehend what was happening.

The next morning, he would look so innocent that you would not believe he was the same person causing a scene the previous night. Whenever this happened, his friends would vow that they wouldn't go out with him again. But when the next weekend dawned, they would go against their vows and repeat the process.

This evening would not be any different. Morsell got into the club, charming and bubbly. Then he slowly began to get drunk and started getting aggressive. Apart from being an aggressive drunk, Morsell also tended to harass women, especially when intoxicated. This would be strikingly visible that night.

First, he began harassing one of the attendants serving them. His friends called him out, so he stopped. Then he made the grievous mistake of extending the inappropriate gestures to Anna, Paul’s girlfriend. As was expected, Paul confronted him. Something he did not take well. What ensued was a confrontation that got violent within no time. Paul delivered consecutive blows to Morsell. Before anyone could intervene, Morsell collapsed and lay motionless on the floor. At first, they thought it was a stunt. When he did not get up moments later, he was taken outside to get a fresh breath of air and some first aid. He still did not come round, so he had to be rushed to the hospital.

When Morsell got to the hospital, he was taken to the emergency room. Moments later, he was pronounced dead. Paul was taken in for questioning by state officials and later arrested. He was arraigned and charged with manslaughter. Once the trial began, he was released on a bond, pending determination of the matter. His parents deposited a title deed to one of their parcels of land as leverage for this. He has since been attending court sessions.

All that trouble was caused by an unnecessary fight that was avoidable. If Paul kept his cool or avoided Morsell’s company altogether, all that would not transpire. Certain people get so aggressive and annoying when intoxicated. The chances of someone beating them is high and can often lead to dire consequences.

It is always wise to shun violence, but where a drunk person is concerned, choosing the high road may be the difference between someone who will end up behind a dock and one who will lead a normal life. Hopefully, we can learn from Paul's mistakes and avoid trouble.

'One bottle won’t hurt' - Your brain has a different opinion
Post a comment
WATCH: The latest videos from the Star
by Neil Samuel @neilsamuel271
Lifestyle
26 April 2022 - 05:00
Read The E-Paper