A lot riding on elections in Kenya, SA this year

Did Ruto's detente with Raila on his bday mean loser will concede? 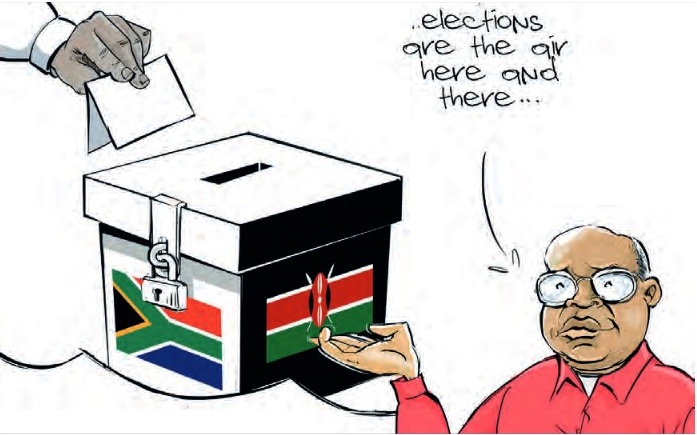 Elections are in the air again here in South Africa, even though it seems we are barely recovered from the November 2021 municipal elections.

This is because in December, the ANC will hold its elective conference for all positions, including that of party president.

While it is not a general election such as that Kenyans face in August, I am guessing it might be just as keenly fought, as it will ultimately decide who gets to be President of the country.

Eligible party members are able to throw their hats in the ring for all positions, including that of party president.

Already, there have been calls for the incumbent, President Cyril Ramaphosa, to defend his post, but so far the President has avoided the question of whether he is in the running for a second and final term as party leader.

The president’s euphoric honeymoon period, or "Ramaphoria" as the media here dubbed it, didn't last as long as it might have.

People wanted fast, maybe even reckless, action against those perceived as corrupt in the previous regime. Instead, they got slow and steady from a cautious man.

I have often thought how much Ramaphosa reminds me of Kenya’s Mwai Kibaki in this sense.

Meanwhile, by the time the coronavirus pandemic came knocking at South Africa’s borders in early 2020, there was already talk of which party faction would replace Ramaphosa.

Covid-19, for all its problems, appeared to put such talk on hold, but now that it looks like we'll have to learn to live with the virus and its variants, life is getting back to some semblance of what it was.

This means political ambitions that had been officially placed on the back-burner can return to the fore.

However, analysts note that traditionally, every President of the party gets a second bite of the cherry, so perhaps President Ramaphosa isn’t sweating at the thought that one of his own ministers might throw their hat in the ring.

There is speculation that among those in the party weighing bids for the ANC presidency is Tourism Minister Lindiwe Sisulu.

If Sisulu, who has long been considered a potential presidential candidate, despite having passed on running in 2007 and 2012, ran against Ramaphosa this year, it would be the second time he has had to face off with a woman candidate.

This at a time when the ANC women’s league has said the time has come for a female president.

Daughter of liberation movement giants Walter and  Albertina Sisulu, in 2017, when she made her first bid for the party’s presidency, she adopted the slogan, "It's a Must."

In the end, it wasn’t really a must, as she withdrew from the presidential contest, choosing instead to run for the position of Deputy President, which she lost.

Sisulu was married to the Kenyan academic Professor Rok Ajulu, one of the academics who fled the country at the height of the Nyayo repression in the early 1980s. He died in 2016.

She is known to be friendly with the Odinga family. Were she to win and become South Africa’s president while Raila and Ida Odinga were occupying the State House, it would be the first time that the two countries had leaders who were also close personal friends.

As to how that would affect ties, which seem to be at their warmest in ages, we’ll have to see.

Speaking of the occupants of State House after August’s election, I must say I was interested to see the birthday messages sent on social media to Raila by his main rival and onetime friend, Deputy President William Ruto, and some of his supporters.

For a split second, it was almost possible to believe that whoever wins the August election, the loser might actually accept defeat gracefully and hope to fight another day.

Since 1992, other than the exceptional circumstances of 2002, there has yet to be a presidential election where the loser just accepted the loss and moved on.