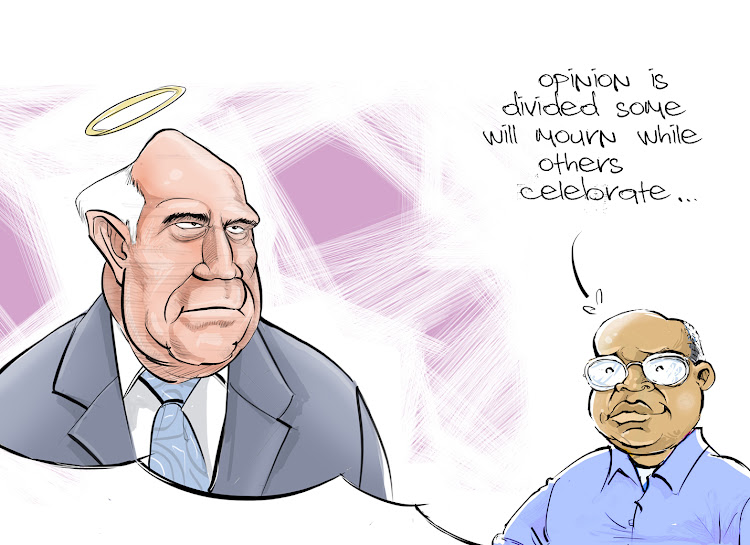 To say that South Africans had mixed reactions to South Africa's controversial last apartheid president Frederik Willem (FW) de Klerk’s death on November 11 would be to massively understate the situation on the ground.

There will be merrymaking in parts of Cape Town on Sunday, November 21, at the same time as his mortal remains are cremated at a private ceremony for family members.

Unusually, for a former African president, neither the cremation nor the funeral that is set to follow will be open to the media, though you can be sure there will be a few attempts to crash both events in the spirit of a photograph being worth a few thousand rands.

Some of these people have held their grudge for more than 30 years since the few short weeks early in 1990, when De Klerk convinced the then ruling party, the National Party, to legalise black-led opposition parties, such as the ANC, and then released Nelson Mandela from 27 years in prison.

His actions ushered in a new political and social order to replace the apartheid system, under which South Africa's minority white population had legally denied human, civic and political rights to the nation's majority non-white population for 42 years. To the disgruntled whites, this was the epitome of race treachery.

The National Party had been in government from June 1948, and during that time, it had implemented its racial segregation policy of apartheid or separate development based on white supremacy.

Of course, white-minority rule and racial segregation were already in existence, but what apartheid did was to intensify the segregation.

These people feel like this despite the fact that in 1992, when the Whites-only referendum on ending apartheid was held, 68.7 per cent of them voted to do away with the system.

Interestingly, in the years since that vote, and including after a decade living in South Africa, I have yet to meet any white person who will openly admit to having voted “No” in that plebiscite. I suspect at least some of the white South Africans I have interacted with may have been among the 31.2 per cent who didn’t want to let go of aparthed, but they don’t have the guts to admit it today.

Then, on the other hand, there are those South Africans who feel De Klerk’s part in South Africa’s transition to democracy never reached a full conclusion in which he, as the last leader of apartheid South Africa, made full reparations for the evil that the system wrought.

Among these would be the people who slaughtered a sheep at a popular open space known as 'Eparkini' in Cape Town’s Khayelitsha township to celebrate De Klerk's death.

The party was organised by a group calling itself the Black People’s National Crisis Committee.

One of the organisers of the event told reporters that only black people were invited to the slaughtering of the sheep and that tomorrow, the day of the former president’s funeral, another event would be held.

It should be noted here that Khayelitsha was built in the 1980s under the principle of racial segregation executed by the government of De Klerk’s predecessor, Pieter Willem (PW) Botha.

In fact, Khayelitsha is one of the apartheid regime's final attempts to enforce the Group Areas Act, which assigned racial groups to different residential and business sections in urban areas in a system of urban apartheid.

Meanwhile, I must say I never got the chance to meet or interview De Klerk. However, I can say I have dined out on his Kenyan connection a number of times.

When De De Klerk made a state visit to Kenya back in 1991, on his last day, he spent some private time travelling to Eldoret, where his grandfather, a clergyman named Willem de Klerk, had lived and worked at the Dutch Reformed Church in Eldoret 50 years earlier. In fact, I believe he was buried there.