Our political leaders thrust greatness upon themselves

They love to go everywhere with a grand entourage

• What makes them feel they are so much greater than the rest of us? 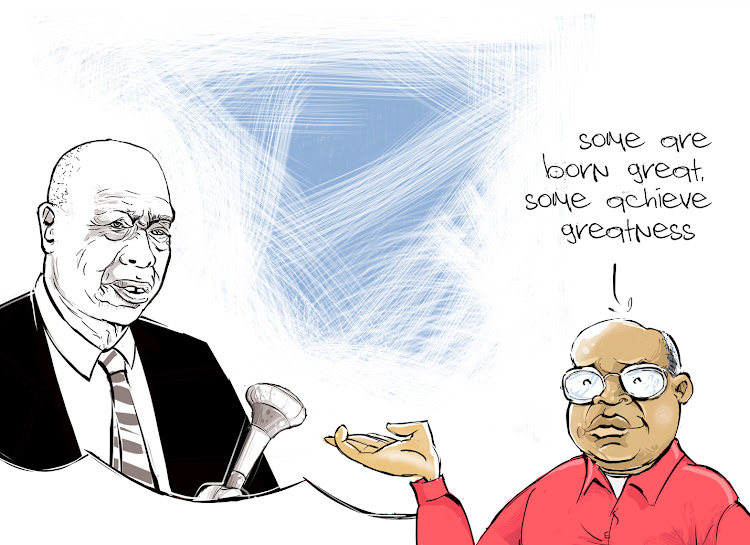 In his cross-dressing, gender-bending themed play 'Twelfth Night', William Shakespeare wrote: “Some are born great, some achieve greatness, and some have greatness thrust upon them.”

Aside: I am sure that going on recent form, the Kenyan censors would have shred the play to ribbons had it been put before them, but somehow, it is still taught in schools.

Anyway, I thought about the phrase when I remembered that once upon a time, October 10 would have been marked with pomp and circumstance by the Kenyan government to commemorate Moi Day.

October 10 is the day in 1978 when Cabinet Ministers and the then ruling party, Kanu, decided that as nobody had put their name forward to oppose the then acting President Daniel arap Moi for the presidency, there was no need for an election and he was, therefore, to all intents and purposes, the President of Kenya.

The swearing-in ceremony on October 14 would be just a formality, but as far as Kenya was concerned, the new era had begun.

Twenty-four years later, Moi would have the triple distinction of having been the longest-sitting Member of the Kenyan Legislature (1955–2002), longest-standing Vice-President (1967–78) and longest-reigning President of the Kenyan Republic (1978–2002).

Moi himself always stressed his humble beginnings but, like it or not, he did achieve greatness and had no need to have it thrust upon him.

However, the one thing that does appear to have been thrust upon him fairly early in his presidency was grandeur.

While clearly as VP, he had high rank and social importance, he had never really been grand about it, unlike some others before and after him.

A story in the Washington Post of August 27 by correspondent Thomas Lipman shows just how devoid of grandeur he was at the start.

Lipman wrote: “Two days after he was sworn in as interim President of Kenya, Daniel arap Moi strolled into the Red Bull, a popular Nairobi restaurant, and took his usual table for lunch with his usual cronies.

“There were no bodyguards and the staff made no special fuss, a reflection of the smoothness with which Kenya was recovering from the shock of Jomo Kenyatta's death and of the fact that Moi has been the heir apparent for so long that little seemed to change when he actually took over the presidency.”

That was not the sort of thing anyone would have expected from his predecessor, who seemed to go everywhere with an entourage, a practice that Moi would soon adopt.

This got me thinking about political leaders generally and what makes them feel they are so much greater than the rest of us. Do we thrust grandeur upon them?

What makes them feel they deserve medals and praise for just carrying out the duties that should be in their job description?

Recently, there was a great furore here in South Africa when the mayor of a small coastal municipality about 130km north of Cape Town put up a monument to mark one term of five years in office.

The event was marked with pomp and ceremony, complete with a guard of honour composed of members of the municipality’s fire service and council law enforcement officers.

There was such a political stink kicked up by the statue that the mayor, who had unveiled the monument to himself, was forced to remove the commemorative plaque praising himself for serving one uninterrupted five-year term. Nevertheless, the monument, sculpted by a local artist and titled the Beacon of Hope, will remain.

Embarrassingly, the mayor is seen as one of the blue-eyed boys of the opposition Democratic Alliance (DA) party, which likes to claim it is the antithesis of the ANC, which it accuses of misusing public resources.

But it just goes to show that political leaders, no matter their stripe, are all pretty much the same if you scratch the surface.

They will take each and every opportunity to thrust greatness or grandeur on themselves, especially when nobody else is threatening to do it.

Behold as narcissists aim their snouts at the trough
by Mwangi Githahu Columnist
Lifestyle
10 October 2021 - 05:00