Helping vulnerable girls to take charge of their lives 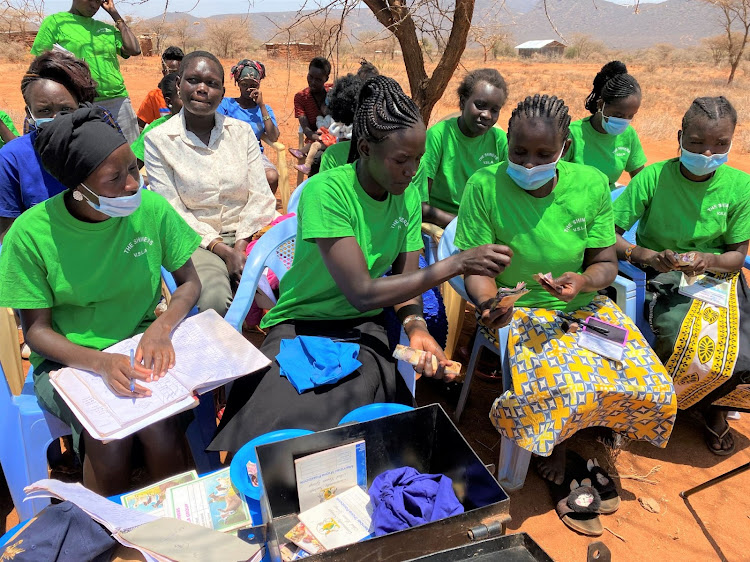 Some were forced to drop out of schools due to poverty and low levels of economic development. Others opted to serve as sex workers to earn a living.

The narrative, however, is changing thanks to a programme empowering adolescent girls to improve their livelihoods.

It is called the Livestock Market Systems Associate programme (LMS AA2), funded by the USAid and implemented by Mercy Corps.

Each group has at least 25 members, who are trained to make money through small businesses and saving profits.

Mother of one Diana Camilla, 22, is the chairperson of the Shiners Village Savings and Loan Association Group.

This is a Girls Improving Resilience through Livelihoods (GIRL) group. It’s among the 90 groups financially empowered in Shambani village, Burati ward, Isiolo.

Camilla says the group consists of 25 girls aged 18 to 24 years old, who meet regularly to save together and take small loans from those savings.

“Most of the girls are school dropouts and others illiterate,” she said. “The association emphasizes accountable governance, standardised procedures and simple accounting. This is to enable the least literate and least influential member of the group to understand and trust.”

Camilla said the activities of the group run in cycles of one year, after which the accumulated savings and the loan profits are distributed back to the members.

“The members save money every week through contributions. At the onset in 2018, members would contribute Sh50 per week. But this has since increased to between Sh100 and Sh500 per week, depending on each person’s income-generating ability,” Camilla said.

She said loans are provided to members after every four weeks, while share-outs are offered after six months. Share-outs are where group members come together to receive a total of what they have each saved.

She said the highest amount saved by Shiners group was Sh552,000 between January and June this year.

She added the highest amount of money received by a member during the June 2021 share-out was Sh85,000.

Girls use the skills to plan how to achieve their aspirations. Shiners group began a savings and loan association and members support one another on their journey to self-reliance

The LMS AA2 programme partnered with World Food Program (WFP) and trained this group. The group was trained on the concept of Village Savings and Loan Association (VSLA).

He said the project started in March 2018, when LMS-Mercy Corps selected 25 girls in the Burati ward from vulnerable backgrounds.

The group has a chairperson who oversees its daily operations and a treasurer who keeps the financial records. It also has a mentor who guides the members and offers strategic advice on diverse issues.

The programme aims to increase the food security and adaptive capacity of their households through food security, financial literacy, and basic education interventions.

This is through the GIRL model, which is currently being implemented in Burati, Oldonyiro and Cherab wards.

He said girls also benefit from skills of agri-nutrition, negotiating their way out of difficult situations and taking up leadership in the community.

“Girls use the skills to plan how to achieve their aspirations. Shiners GIRL group used the skills to begin a VSLA and support one another on their journey towards self-reliance,” Bitacha said.

He said the girls had been faced with diverse socioeconomic challenges, including unemployment, excessive alcohol consumption, drug abuse, serving as sex workers and domestic violence.

“Access to credit for the youth from pastoralist communities in Northern Kenya is a significant challenge. Because most financial institutions lack innovative products that conveniently fit these underserved groups at the county level,” he said.

He said many financial institutions also consider the agriculture and livestock sectors as risky.

“Therefore, the purpose of the Village Savings and Loan Association is to provide simple savings and loan facilities to vulnerable girls who don’t have access to formal financial services.”

I have always desired to go back to school and pursue my college education. In the last loans share-out from the group, I received Sh33,000 and used that to pay my admission fee at the KMTC

Mother of one Rael Aspital, 23, is pursuing her studies through the savings and loan association.

Aspital has enrolled for a certificate course in community health nursing at the Isiolo Kenya Medical Training College (KMTC) since March this year.

“I have always desired to go back to school and pursue my college education. In the last loans share-out from the group, I received Sh33,000 and used that to pay my admission fee at the KMTC. So through this group, I am a self-sponsored student at the college,” she said.

“I decided to just start off as I hope for any other support from well-wishers that will enable me complete my education as the medical course is quite expensive.”

The mentorship and training provided by LMS-MercyCorps have equipped the girls with technical knowledge and critical business and life skills needed to overcome life challenges.

“We know our rights as the youth of Isiolo, and we have even made moves to engage the county government to support us with agri-business loans through the County Youth Development funds,” she said.

“Our knowledge and skills have massively improved, and now we want to be involved in the county’s public engagement forums and civic education sessions.”

She has since been nominated as a board member of a local school as the representative of Class 7 pupils.

Camilla says thanks to the training and mentorship, the participants (beneficiaries) have improved awareness and preparedness in dealing with future shocks and stresses.

“For the girls who have ventured into business, such as green groceries, hair and beauty services, their most immediate clients are also the members of the groups and their families,” the chair said.

She said participants sell their produce and services to friends and other members of the Burati community.

A few ventured into poultry farming but have since sold the chicken and eggs during a disease outbreak.

Why you should not mix business with friendship

Bitacha, the project coordinator, says through the mentorship and capacity building for the girls, members have strengthened their social cohesion networks and can trust and share their other family issues.

He said members have saved their colleagues from domestic violence.

“These market-based livelihoods and the VSLA approach provide the space for economic information exchange and a sense of comradeship, friendship and sisterhood among the girls,” he said.

Bitacha said members of the Shiners group reported great transformation in their lives since the programme engagement and the continuous mentorship process.

Maria Goretti, the group mentor, said they now they have increased self-esteem and dignity because they are no longer idle, nor do they loiter in the streets.

She said during the day, most members are very engaged in their various income-generating activities.

The girls can now access finances to sort their immediate financial needs without depending on their husbands, she said.

Goretti herself attested to this. “I used to depend on my husband for money to buy even the cheapest commodities like salt in my house. This brought about quarrels and fights every time I lent him money,” she said.

“But now, through the village savings and loan association, I can sort myself and my husband finds the items already bought. He now appreciates me and compliments my effort to chip in financially to support our two children.”

She said the interventions have transformed men’s perceptions of women’s role and capacity within the household and the economic sphere.