• The tourism industry has been hit from all sides, economically and environmentally 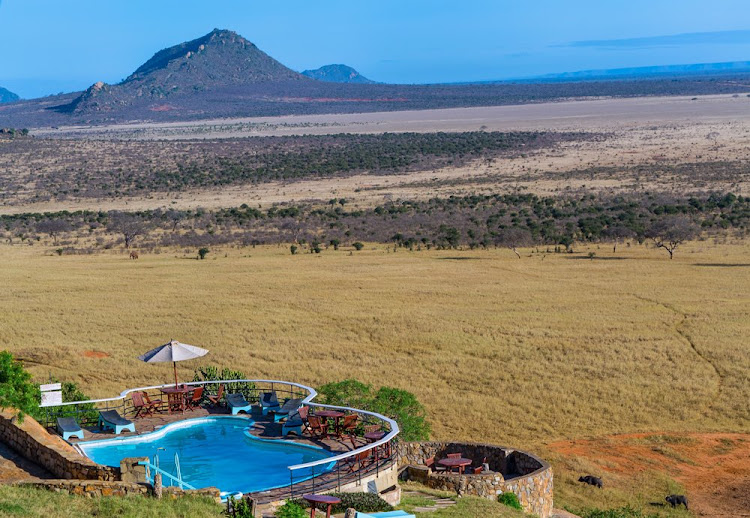 During a visit to Tsavo East National Park in June, a standout feature was a pool of water at Mudanda rock, where hippos came to quench their thirst. Upon return in September, there was no sign of life, only dry and cracked soil.

This was a snapshot of the industry's problems. Reeling from travel restrictions that kept tourists at bay, it now barely has the wildlife tourists come to see. Many have migrated in search of water, and those still around are under threat from bushmeat poaching.

As the world celebrates Tourism Day this week under the theme 'Tourism for inclusive growth', it was a chance to reflect on how the space for wildlife to roam freely and safely with food and water aplenty is shrinking.

But who will look after the wildlife that has been affected by the drought?

On a tour inside the Tsavo East National Park with fellow journalists, a game drive leaves our faces, eyes and hair all stained with red-brown soil, the colour painted in the bodies of elephants trekking in groups across the wild. 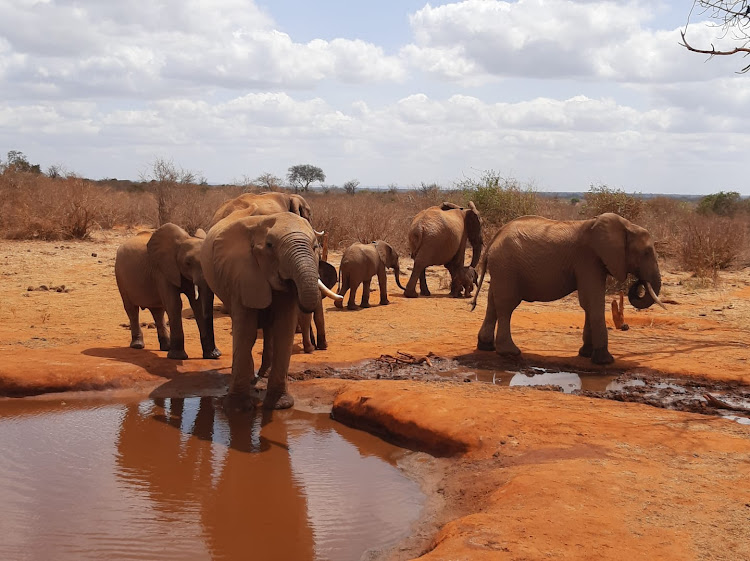 “This is a major concern. When you come as a tourist, it is good to see the wild animals, the scenic beauty among others. But lack of rains has affected every activity at the Tsavo park,” he says.

“Animals have migrated in most of the places. You go to a well-known point as a tour guide with the tourists only to get disappointed,” he says.

“They are looking for water. Initially, key areas like rivers were the circuit points because you were sure you could spot at least some of the animals. In Tsavo East, the circuits have decreased from eight to only about four.” 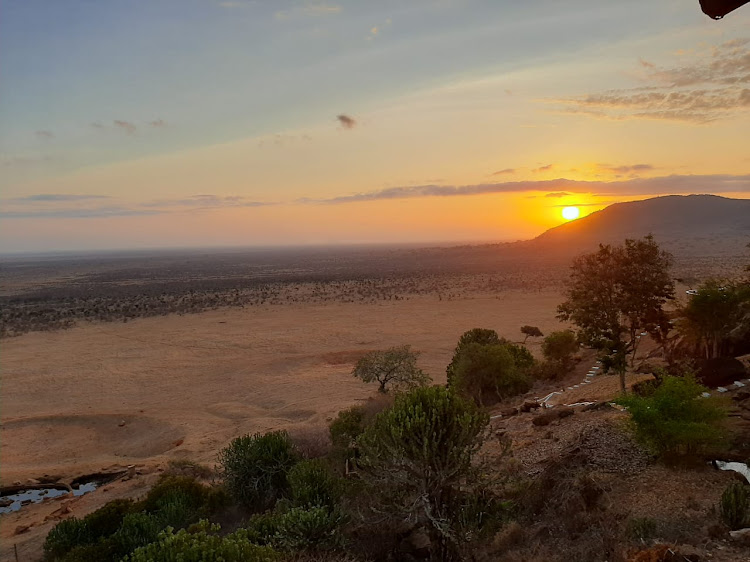 Animals have migrated in most places. They are looking for water. You go to a well-known point as a tour guide with the tourists only to get disappointed

The gloomy perspective does little to dampen the spirits of tourists. A tour van arrives with some from abroad, eager to take pictures.

Two tourists, Magda and Michael, who had come to the Voi Safari lodge say they like the weather in Kenya.

“The weather here is so nice,” Magda says. “In Poland, it's 5 degrees and we don’t have safaris. When we came here on Monday, we saw a lot of elephants, giraffes, zebras, and dik diks.”

She says she has always wanted to visit Africa since she was little.

“I always felt that Kenya is the core of Africa. I have come here for one week. And I like everything from food, the people and even the beaches. The last time I came here I did not know people can speak English so well,” she adds.

Michael says this is his first time visiting Kenya.

“Kenya offers the possibility to relax on the beach and go on safaris to see wild animals, something we do not have in Poland. I like the food a lot and the spices. They have some influences from India,” he says.

A lioness is spotted in one of the circuit areas lying low, as if it has feasted of one of the antelopes that had been hoping in the nearby bush. Our tour guide Brian Were speaks to colleagues on the phone, telling them to come to that spot.

“Bring the tourists on this side of the park, there is a lioness lying low on the ground. If you take the left turn, you will also see some cubs, about three in a tree shade about one kilometre from here,” he says.

Similarly, whenever the tour vans come across each other on the main road, the guides stop to give each other info on where they have seen animals.

These exchanges are the only way to be sure of seeing the wild animals in this drought. And for the hippopotamus, the drought made it hard for them to survive.

We traverse valleys white with blossoms, where the air is laced heavily with scent, until we arrive at Mudanda rock. This is a huge, orangish stone that rises unexpectedly out of the bush, with a flight of steps cut into its huge flank.

“Mudanda means the place of dried meat,” Were says. It draws underwhelmed expressions, which change to surprise and excitement upon climbing the huge flank stairs.

Running for 1.5km, the rock is like a vast runway, a landing strip in the wild.

“Tsavo is the theatre of the world. Wildlife is abundant. Look at the plateau, look at the scenic features from up here!” Njue says proudly as the tourists get a glimpse of the beauty.

On the far side of the rock, there is a dried-up river surrounded by some bushes and scrubs. Gone are the attractions of my last visit. The hippos that used to rise, chortle and blow their little ears are nowhere to be seen.

“The hippos must have gone to look for other water sources in Galana river at the far corner of the park,” Were says, sitting down.

The Mudanda rock now and before
Image: NANCY AGUTU

The Elephants are clever, they can sniff and dig with their legs and tusks. They think like human beings.

Kenya Safari Lodges and Hotels general manager Joseph Ndunda says the animals have a way of knowing where to get water.

“Even here at Voi Safari Lodge, if they don’t get water in their pool, they start digging into the tunnel, where they feel and sense that water is emanating from,” he says.

“The elephants are clever, they can sniff and dig with their legs and tusks. They think like human beings.”

Voi Safari Lodge is strategically located in Tsavo East National Park. It stands high above the town of Voi, overlooking a vast expanse of the African bush.

The tunnel within the hotel leads to a waterhole, where you get close and personal to the wildlife, which includes elephants, buffaloes, zebras, waterbucks and sometimes lions.

“For us to avoid [a lack of animal presence], we make sure their pool has water consistently. With the drought, most animals look for areas. And as they come here, this now becomes a source of attraction for lodge visitors,” Ndunda says.

The current drought has only exacerbated the situation: killing animals through lack of water and food, and causing increasingly complex human-wildlife conflicts. The situation is so dire that the government needs to act.

It’s not just the drought that is devastating wildlife. Covid-19 is having its own undesired effect. Bushmeat poaching is on the rise, with antelopes, dik-dik, guinea fowl and giraffes targeted.

The KWS led a crackdown on bushmeat poaching in 2019, leading to a spike in seizures. But the pandemic has only made things worse.

“They want to put food on the table. But we have a multi-agency team in place, trying to bring it down. Some decent-paying job opportunities were lost during the pandemic, which has caused all this.”

But Njue says KWS has beefed up security in the Tsavo parks.

“We have also increased rapport with the community around the parks. The community can help identify bad apples within them. Our work has been positive and poaching has been reduced,” he said. 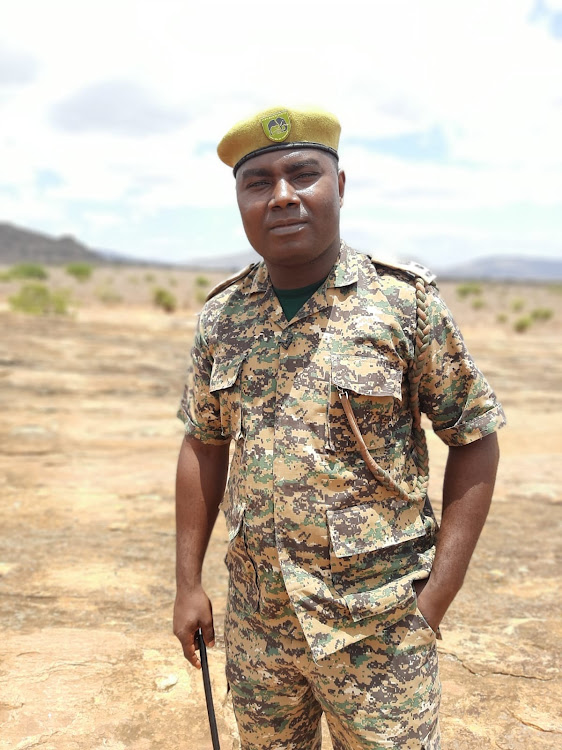 “Our awareness officers are strategically positioned in communities as they walk door to door to sensitise the community. KWS also uses local FM radio stations for education,” he said.

Through conservation partners, they are working on creating jobs for the community, such as bee-keeping and sunflower and aloe vera farming, to act as an alternative source of income.

“We are working with the government to reach out to these fellows. When they are educated, they are made aware of the consequences. We also work with local leaders in Barazas and youth programmes,” he says.

With the world celebrating tourism this week, the industry plays a huge role in persuading local people that there is a future in community-led conservation.

Ochieng says sensitisation now makes the communities realise that when an elephant is killed, they are losing an asset.

“Local communities are on the lookout and will challenge their brothers. If welfare, education and employment are being jeopardised by the outside killing of an animal, they won't let it happen,” he says.

Ndunda says before the pandemic, the hotels, which include Ngulia, Mombasa Beach Hotel and Voi Safari Lodge, were receiving many visitors.

“The pandemic was unprecedented when it came; we thought it would take only three months. When they said it will spread up to 2022, we thought they were prophets of doom,” the KSLH boss says.

"But looking at the economic aspects, it has been affected so much."

He is optimistic, however, that things are improving with the administration of vaccines across the country. 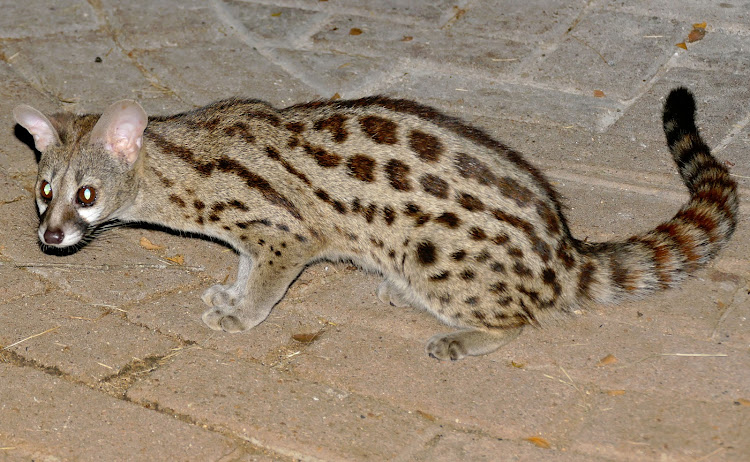 A genet cat wanders at night at the lodge
Image: VSL

“The removal of Kenya from the red list will also play a big role in increasing tourism not only in Tsavo or even other parks. Tourism has contributed to global, social, economic and cultural aspects in achieving sustainable development goals,” he said.

Noting that the effects of Covid-19 cannot erode what Kenya has achieved so far, Ndunda said hoteliers have been forced to cut their prices to entice tourists.

“Here at Voi, we have offered them a 10 per cent discount. We are expecting more than 70 guests this week. Most of them come in doubles and they are from different countries, including Europe,” he says.

Ochieng is optimistic that KWS's efforts will cut down on bushmeat poaching and increase tourism.

The conservationist is focused on shutting down the markets selling bushmeat. His rangers are also out patrolling and de-snaring poaching hotspots.

"It doesn't solve the root of the problem. We must educate them on why they should stop poaching. We must talk to elders to help us with this,” he says.

If Covid taught travellers anything, it’s tourism begins at home