• Fencing with hives solved this, and each can produce 15kg of honey worth Sh6,000

When Jones Mwakima installed his first hives at his farm in Taita Taveta county five years ago, his focus was to supplement the little harvest he was getting from crops. Little did he know that it was also a sure way to fight the perennial human-wildlife conflict. https://bit.ly/3iBxwMC

When Jones Mwakima installed his first hives at his farm in Taita Taveta county five years ago, his focus was to supplement the little harvest he was getting from crops. Little did he know that it was also a sure way to fight the perennial human-wildlife conflict.

For decades, farmers in areas bordering the expansive Tsavo East National Park had been counting losses due to elephant invasions in their farms. Extreme weather conditions pushed elephants to stray to farms in search of water and pasture.

Over the years, farmers watched helplessly as stray elephants cleared their crops, leaving them to rely on relief food. Their efforts to fend off errant elephants by beating iron-made drums whenever the wild animals invaded farms did not work.

Trials and losses endured by farmers of pishori rice

They have to grapple with birds, snails, brokers and illicit traders
News
1 year ago

Their fortunes changed when they registered under the Kajire farmers’ community-based organisation, which harnesses the power of beekeeping to ward off elephants. Jumbos have an inherent avoidance of bees.

“Initially we could not harvest anything from the farm. Elephants would have cleared all the crops before maturity,” Mwakima, whose farm is in Kajire village, Voi subcounty, says as he inspects his chain of hives.

The father of four has erected 20 hives around the borders of his farm. From the hive-fenced area, he is now able to grow and harvest green grams, sorghum, cassava and other drought-resistant crops.

“It is from the harvest that I have paid school fees for my children. My firstborn completed university education just recently but the rest are in school,” Mwakima says.

We fetch at least Sh12,000 from every hive annually. The organisation buys the honey directly from the farm, thus saving us the cost of harvesting and looking for a market

The beehive project, supported by Save the Elephants, has helped them increase their agricultural productivity.

The innovative solution to the human-elephant conflict was initiated by zoologist Dr Lucy King. Now an award-winning project, it has widely been used globally to reduce damage from crop-raiding elephants.

Further, it has created a social and economic boost to poverty-stricken rural communities through the sustainable harvesting of honey. Each hive has the potential to produce 15kg of honey worth Sh6,000.

“We fetch at least Sh12,000 from every hive annually. The organisation buys the honey directly from the farm, thus saving us the cost of harvesting and looking for a market,” Mwakima explains, adding that once processed, the elephant-friendly honey is branded the name of the farmer.

A survey by Save the Elephant shows that crop-raiding by elephants has been successfully reduced in the beehive fence-protected farms of the Sagalla community.

Mwakima's wife Joy Chengo is equally happy with the project since it rekindled hopes for a hunger-free society in the once less-productive area.

“Besides controlling marauding elephants, farmers had to change from indigenous crops like maize to more profitable crops that cost less to grow,” Chengo says.

In the vicinity of the couple's farm lies the colourful farmland of Patrick Mwalua at the foot of Sagala hill. Mwalua ditched indigenous maize farming and replaced it with sunflower, and now green and yellow flourishing sunflowers decorate the terrain.

Staring out at the beautiful sunflower while watching the sun slowly disappear beyond Sagala hill gives a spectacular view of the farm. 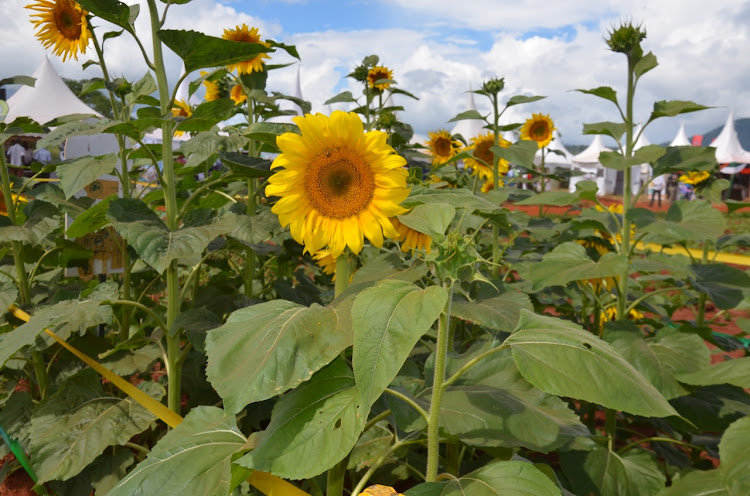 A section of glowing sunflowers at Patrick Mwalua farm in Kajire village. The community has put more than 200 acres under sunflower plantation, and this has attracted reliable buyers
Image: SOLOMON MUINGI

Empowering beekeepers will increase their income, improve food security and create more jobs. It is a less costly way of fighting hunger in the community

Swarms of bees are busy flying from one flower to another as they collect nectar.

Mwalua says sunflower farming is among his plans to venture into agribusiness. It is not only drought-resistant but also complements the beekeeping project well.

He is among dozens of farmers who grow sunflowers here.

Sunflower is a good producer of nectar and, therefore, it plays a key role in ensuring a steady food supply for bees at his apiary.

The conservationist was in 2019 awarded a Head of State Commendation award by President Uhuru Kenyatta for delivering water to thirsty, stricken wild animals in Tsavo National Park.

Elephants do not relish sunflowers and, therefore, growing the plant helps to keep them at bay.

The flowers also create a viable potential and conducive climate for bee farming. The county has a high potential for honey production due to its vast area and semi-arid climate.

Collectively, the community has put more than 200 acres under sunflower plantation, and this has attracted reliable buyers.

Non-lethal methods like climate change adaptation can effectively be used to reduce elephant attacks, he adds.

He now wants the government to facilitate extension services and equip more farmers to do beekeeping.

“Empowering beekeepers will increase their income, improve food security and create more jobs. It is a less costly way of fighting hunger in the community,” Mwalua says.

Statistics from the county’s Agriculture department show that there are about 950 farmers engaged in beekeeping, and 10,300 beehives have been installed.

Mwalua however says this number is way below the honey demand, so more farmers should venture into the lucrative sweet business.

Robinson Asira, the Kenya Meteorological Department county director, emphasises on the need to adapt to the area's weather patterns.

“Drought-resistant crops can tolerate high temperatures and low rainfall because they require less water. They also take a short period of time to grow,” he says.

The drought-tolerant and high-yielding varieties include pigeon peas, green grams, sorghum, millet, cassava and other legumes.

The officer further wants farmers to work closely with agricultural extension officers to be advised on the right varieties. He said adverse changes of weather conditions and depressed rainfall could hurt farming if the right crops are not planted.

“Farmers are feeling the economic effect of climate change, and we are training them to adapt climate-smart farming that can help promote productivity,” Okoba said.

Among the approaches advocated by FAO are using modern farming practices that cope with the effects of climate change. Okoba says more small-scale farmers are being trained to help achieve a hunger-free community.