Politicians are going round urging citizens to register as voters

• Some are adept at being kingmakers, others are running on a secessionist agenda 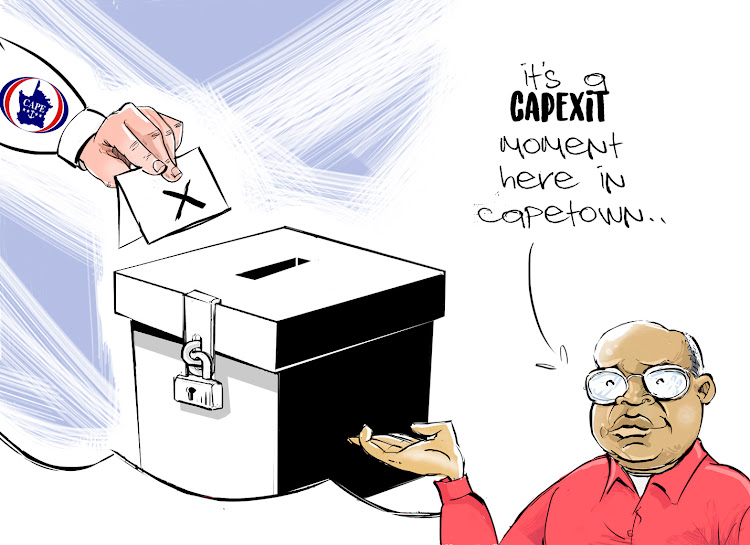 South Africa is in election mode. The local government elections are set for November 1, and politicians have been crisscrossing the country, urging citizens to register as voters.

I know I will probably mention the elections a number of times over the next few weeks, so let me give you a little snapshot of who’s who in as far as Cape Town’s local government elections circus is concerned.

Whereby the municipalities keep changing hands, the ANC and the DA have an equal number of councillors but an independent councillor, or one from a small party holds the balance of power and changes allegiances depending on whose political sweet nothings they are more amenable to.

So, for instance, this past July in the small, semi-desert sheep-rearing Karoo municipality of Laingsburg, the hyper-local Karoo Ontwikkeling Party (or Karoo Development Party) ripped up its coalition deal with the DA to get into bed with the ANC.

The new set-up means that the DA speaker and deputy mayor were ousted from office and replaced by ANC councillors, while the mayor’s position went to the KOP councillor after the council change of leadership. KOP may be in the mayor’s post, but the ANC is now firmly in control of the council.

Meanwhile, elsewhere in the province, we have the Bitou council. Here, the municipality is taking the local government member of the executive council (MEC) to court for not firing a councillor who has, meanwhile, been the kingmaker in the municipality, switching alliances between DA and ANC whenever it suits him.

The provincial executive council is the province’s equivalent to a Cabinet and is headed by the Premier of the province. So an MEC is sort of like a minister.

The DA and the ANC may want to think that the battle for the Western Cape is between the two of them. But Julius Malema’s EFF and former Cape Town Mayor Patricia de Lille’s Good Party (yes, you read that right, Good) are hoping they can give them something to cry about.

Into this mix comes the issue of the province’s secession. There are those who, given half a chance, would prefer the Western Cape to split from South Africa.

But as those of us who have watched the TV series 'Yes, Minister' know very well: “Before you believe the numbers in an opinion poll, it is very important that you look at the way the questions were phrased for the poll. Otherwise, good pollsters can give you whatever results you'd like by manipulating the questions.”

That said, the issue of seceding is big enough to have the support of one of the smaller national parties, the Freedom Front Plus or FF+, and to have spurred the creation of a single issue political party here in Cape Town, the Cape Independence Party or CIP.

CIP’s leadership recently told me: “As the name implies, the Cape Independence Party is standing on the platform to declare the Western Cape an independent country.

“Just as Ukip in Britain stood for Brexit, so, too, we at the Cape Independence Party here in the Cape stand for Capexit.”

From the slickness of their campaign machine and their posters all over the city, it would seem that just like Ukip, they have some serious money behind them.

Whether that will be enough for them to make serious inroads in the elections remains to be seen.