Why hustling is the way out for youth

• Julius Odhiambo’s story shows that job seekers should be versatile, not wait for hiring 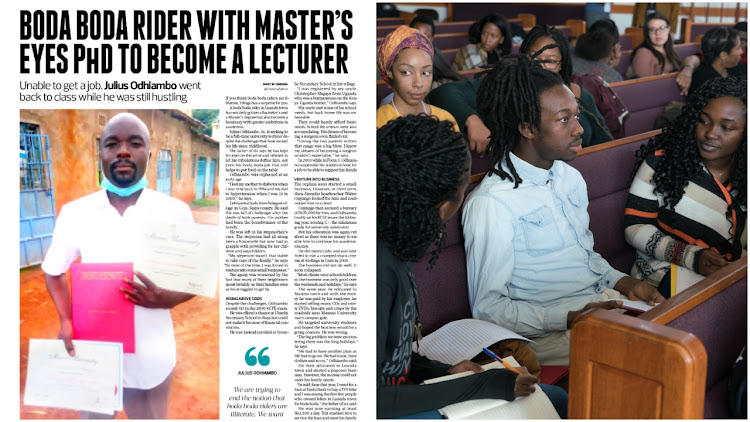 The inspiring story in the Star about a 36-year-old boda boda operator who holds a Master’s degree and is pursuing a PhD once again highlights the mismatch between job creation and large numbers of the unemployed.

Technically, Julius Odhiambo is employed but most Kenyans would not regard boda boda work as proper employment. Besides, he aspires to become a university lecturer after he gets his PhD and becomes Dr Julius Odhiambo.

Odhiambo’s story shows why job seekers should be versatile. Despite the circumstances in his life, he is relentlessly pursuing his academic journey. He married and is now a father of six. There isn’t much glamour in the boda boda business but the work has helped him get closer to his goals.

Hustling while studying or searching for employment could be the way out for the youth. Most of the approximately 1 million people joining the job market each year will not get jobs immediately after school. As companies turn to technology to cut their labour costs, what is the future for job seekers?

Perhaps history is a pointer to the future. Mass employment is a 19th-Century phenomenon brought about by industrialisation. Before the rise of factories, most people were farmers or craftsmen, working at their own pace with their tools at home. Industrialisation is responsible for salaried employment, trade unions and social security.

The growth of freelance jobs could be a return to pre-industrial types of craftsmanship. Hustling is not only about starting a business; it’s about marketing your skills.

Kenya contributed the highest amount of new job listings in 2019 with 33% - Roam.

No one to take him in, he begs, does menial jobs.

Juma Rashid shares his struggle despite having university papers

After failing to get Uhuru’s help, John Mwae became a freelance writer