Located on a busy road I gathered intel on how some hustlers survive. 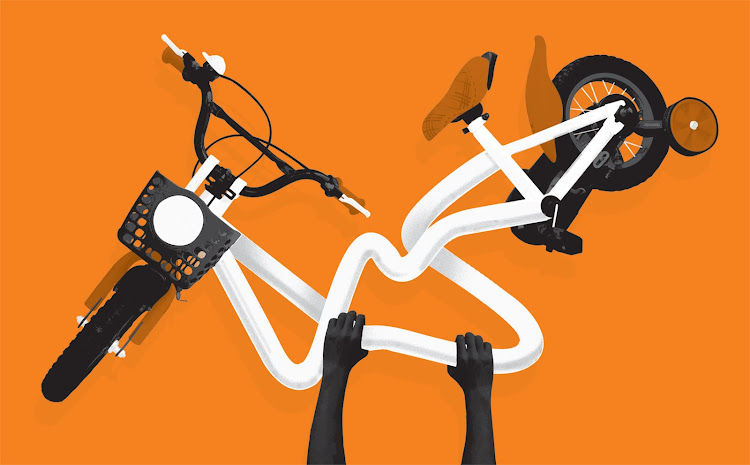 I lost my job in 2017 and to heed the call of His Excellency the President and his Jubilee government, and also to follow the path that many Kenyans who are increasingly finding themselves unemployed take, I decided to dabble in ‘self-employment/entrepreneurship.

After doing some basic research, including some introspection on what I was passionate about – as they say in those motivational books – and armed with some savings, I opened a motorcycle spares shop which was also a roadside garage. I also bought a 50 litre electric air compressor so that I could also do some basic tyre repair. I figured I could not go wrong.

Located on a busy road I was able to gather some intel on how some hustlers survive.

The tyre hustlers: These are unbelievably resourceful; they will knock on the gates of our middle-class neighbourhood homes and ask if you have used car tyres and give you myriad reasons why they want them. Mostly it’s because they want to resell them to handcart pushers but most Kenyan motorist are now quite aware that used tyres have some value so the clever ones will have a pitch!

Mostly it will go like this …yes some tyres can be reused by other cars but yours are almost useless and can only be used to, say, make rubber ropes. You or your security guy will most likely dispose of them as you also have no use for them. Then they will come to someone like me or, to be more specific, my tyre guy, who will assess the tyres and yours truly will pay up for the merchandise.

Once one of these guys sold us a pair of used tyres for Sh2,000 each that we later found out he had bought for a total of Sh200. He had another pair that we did not buy because it was not a moving product. I should add that this is a risky business. You might end up with someone’s stolen spare tyre and for motorists, buying used tyres is a recipe for disaster.

What was interesting about this hustle was that they were charging the truck drivers to dump the debris. They were also charging people to go in there to scavenge for scrap metal or other valuable construction materials. Additionally, trucks carrying red top soil dumped it in a selected area at the site where it was then resold to people looking for this type of soil, which is sought after for cultivation

The used bicycle hustler: This market is getting saturated but still there are some making a decent coin. Most of us know that the bicycles we buy at our local supermarkets are for the most part unusable. Hence the growing used bicycle hustle.

The one I was familiar with at my station was a master at this trade. In his shop he had a repair guy, and some select flimsy bicycle frames of ‘supermarket bikes’ as he used to call them. He was also armed with spray paint and new bicycle accessories to spruce up his sometimes very rusty imported used bikes.

When he had a customer, be it one seeking to repair their child’s bike or buy a new one (again mostly for kids), he would immediately retrieve the fragile frames and embark on educating the customer on why they should buy his used bikes by displaying how flimsy the frame he was holding was.

He would bend the frame like a loose copper wire, all the while talking of the danger of a child riding a flimsy bicycle on the streets, with our roads being dangerous and all. Bear in mind that we were located on a busy highway. Suffice it to say he was so persuasive that I ended up buying one for my son. His mark-up was more than 100 percent of what he got them for. I should add here that his repair shop was also a big hustle; he once had a client that he charged Sh8,000 for servicing a high-end bicycle. I had never heard of such things before. I mean just regular greasing, oiling and tightening of things!

The brokers: I also observed some interesting guys who used to hang out by the shops waiting for lorries to come and dump debris from construction sites in a ridge just behind our shops. Later I found out that they had been given a contract to fill up the ridge by the owner of the land and were being paid a tidy sum to do it.

What was interesting about this hustle was that they were charging the truck drivers to dump the debris. They were also charging people to go in there to scavenge for scrap metal or other valuable construction materials. Additionally, trucks carrying red topsoil dumped it in a selected area at the site where it was then resold to people looking for this type of soil, which is sought after for cultivation.