Would a Kenyan judge have dared jail an ex-President?

In Kenya, Makau Mutua shunned idea of Moi being ‘undressed in public’

•TJRC is the closest Kenya has ever come to ending impunity, but if failed ignominiously 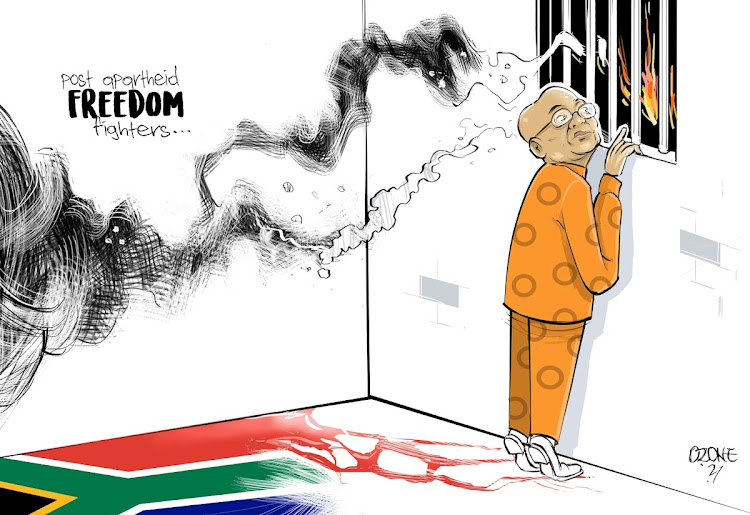 South Africa has boldly gone in 2021 where Kenya feared to tread in 2003. If you keep up with the news, you are probably aware that former President Jacob Zuma has been spending some time in jail.

By the way, please note the former President is not serving time for any of the 16 counts of corruption, racketeering, fraud and money laundering that dogged his presidency and which he denies.

He was, in fact, sent down by a judge on contempt of court charges.

Zuma started serving a 15-month sentence for contempt of court on Wednesday night.
News
1 week ago

There have been protests and riots over the former President’s incarceration, but the government so far seems unmoved.

Meanwhile, it is not an opposition government in power. In fact, the current Cabinet has quite a few people who served under Zuma until he was forced out of office in 2018, and is led by Zuma’s one-time deputy.

While at the time of writing it looks as though former President Zuma will serve at least one-third of his 15-month term, these political situations are fluid and a week is a long time.

The #FreeZuma riots and protests could get out of hand and force President Cyril Ramaphosa to issue a pardon to his predecessor.

However, as a former director general in the presidency, Rev Frank Chikane, told an interviewer on TV, presidential pardons are usually doled out to those who have shown remorse for their actions and admit to being at fault.

President Zuma has so far not shown remorse and is not expected to admit to being at fault. So a pardon could be tricky unless he were to suddenly become ill, in which case it is possible that a compassionate pardon could be issued.

That said, South Africa has burnt its fingers before with a high-profile medical parole gone wrong.

Back in June 2005, Schabir Shaik, a man known to be associated with then Deputy President Zuma, was convicted of two counts of corruption and one of fraud and jailed for 15 years.

Shaik’s being found guilty of corruption and fraud also led to Zuma's dismissal by then President Thabo Mbeki.

Two years and four months after going to prison, in March 2009, Shaik was released on medical parole on the grounds that he was terminally ill.

However, between his medical parole, which was meant to have been spent under house arrest, and 2019, when he was freed in a general prisoner amnesty, there were numerous reports of Shaik being spotted shopping, dining at fancy restaurants and playing golf.

Meanwhile, even though we all know death can come to anyone at any time, 15 years later, Shaik appears to have dodged the grim reaper and is thriving.

For now, therefore, chances are that unless he wins a reprieve in the courts, Zuma is in for the long haul.

In Kenya, back in 2003, even as the task force looking to set up a Truth, Justice and Reconciliation Commission was being organised, the task force boss Prof Makau Mutua seemed to be managing expectations when he said: “Kenyans do not want to set a precedent in which the former President is, as it were, undressed in public.”

If memory serves correctly, President Moi refused to have anything to do with the TJRC.

I am sure if he had been forced to appear, he would have adopted the same Stalingrad legal defence strategy President Zuma has put to such devastating use, appealing every unfavourable ruling and using whatever other means possible to delay proceedings.

In the end, the Kenyan TJRC, which had held great promise for so many, ended up failing ignominiously to satisfy expectations and is probably one of the reasons why impunity continues to reign supreme in Kenyan public affairs.

Had the commission reached its expected logical conclusion, a heck of a lot of people who are sitting pretty today would have had to face trial.

While certainly some might have been pardoned, I’d like to think there would have been enough people sent to jail to make others think twice, but I guess we’ll never know.