• It collects water from a spring deep in the earth and pumps into an outer tank, where it serves both humans and wildlife 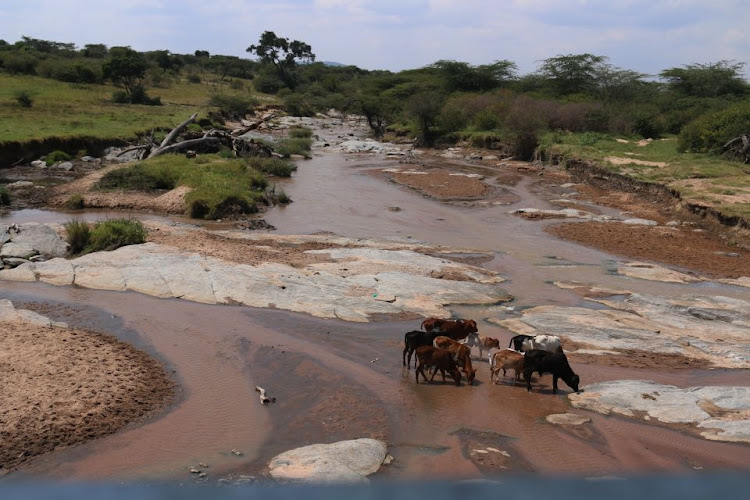 For years, delegating water-fetching tasks to her daughters alone was too great a risk for Esther Sanoe, 48, from Nkolale village in Maasai Mara, Narok West.

"It was a dangerous chore and one that took hours to accomplish," said the mother of seven. "We went to the river as a group, lest an animal attacked and killed your child."

Women and girls from her village would walk 4km in search of water along the Ormerui River, a seasonal waterway emanating from the Loita hills. During annual dry seasons, the women would scoop out sand from the riverbed that had been carried downstream and accumulated as silt, squeezing off the water flow.

By doing so, however, they set off a competition with wildlife for a scarce but vital resource that further imperiled their health and safety.

"We would scoop and leave the dams filling up, but on return, we would find it empty as the wild animals quenched their thirst," Sanoe said.

It took more than two hours to fill a few jerrycans, and Sanoe said they were often forced to stay at the river past nightfall, making it more likely they would meet a herd of elephants or a pride of lions on their way home.

Now, however, efforts to collect alternative sources of water are helping curb the human-wildlife conflict and reducing waterborne diseases.

One of those projects starts at the Ololokari community conservancy, where a tank draws water from a protected natural spring and pipes it down to Sanoe’s village 13km away, providing residents with regular access to clean water.

Using money from the Narok county development fund, community contributions and a donation from the Netherlands, the Nkolale community development organisation has built a 100,000-litre underground tank that collects water from a spring deep in the earth.

That water is then pumped into an outer tank, where some of it is directed to open wells for wildlife to access and the rest is pumped by gravity over 13km to serve the surrounding villages, schools and health facilities.

The conservation work started in 2010, and three years later, water began being piped to the villages, where it currently serves more than 7,000 people via six different water kiosks.

The community has planted bushes and trees around the tank and registered the area as a conservancy, which prohibits tree cutting or grazing. The villages have access to the water twice a day, in the early morning and late evening, and pay a Sh100 monthly fee that helps to maintain the infrastructure. (The schools and health facilities have 24-hour access for Sh2,000 a month.)

Nkolale community development organisation manager Nelson Kirrokor said their aim was to reduce the high water-borne diseases and consistent human wildlife burden that had weighed down the community.

“Especially [for] the women who spent hours fetching contaminated water that lead to diarrhoea among the children,” he said.

Conflicts between people and wildlife currently rank among the main threats to conservation in Africa, since residents often end up killing endangered species, such as elephants, during confrontations.

Two-thirds of Narok county is classified as semi-arid, according to the Ministry of Agriculture, Livestock and Fisheries.

Yusuf Adan, a wildlife programme manager at the World Wildlife Fund (WWF), said competition for water kicks in during the dry season, when the area’s rivers dry up and there isn’t enough water to meet the needs of the wildlife, humans and livestock.

"Because they all share the same space and meet at the watering points, conflict arises. The wild animals kill people and they retaliate, killing the wild animals," Adan said.

The increased frequency of drought is aggravating the problem, along with growing deforestation around the Mau Forest Complex, one of the area’s main reservoirs.

The Mau complex covers more than 400,000ha in western Kenya, making it the country’s largest closed-canopy forest ecosystem and the most critical water catchment in the Rift Valley.

At slightly over 46,000ha, the Maasai Mau in Narok county is one of the 22 forest blocks that make up the Mau Forest Complex. The ecosystem is a source of several critical rivers, including River Ewaso Ng' iro, which flows into Lake Natron in Tanzania.

But growing demand for agricultural space and the expansion of human settlements have led to the illegal occupation of forested land and an increase in logging around the complex. Increased livestock grazing in forests has prohibited natural tree regeneration.

Between 2001 and 2019, Narok county was among the top six regions responsible for more than half of all tree cover loss in Kenya, according to data from the World Resource Institute’s Global Forest Watch, a global forest monitor.

Tree loss prevents the land from absorbing water since trees serve as natural sponges that collect rainfall and allow it to filter into the ground, where it recharges underground aquifers, streams and rivers. Without this buffer, water slides across the earth’s surface and picks up sediment that ends up in waterways and causes flooding.

Narok county supports about 30 per cent of all Kenya's wildlife, much of it found on private and communal lands and wildlife conservancies outside the state-protected Maasai Mara National Reserve.

As a result, the county has among the highest reported incidences of human-wildlife conflict.

A 2019 report on human-wildlife conflicts and their linkages in Narok county by Joseph Mukeka found that from 2001 to 2017, the county experienced nearly 14,000 conflict incidents, involving 13 wildlife species.

Around half of all conflicts were related to crop raiding, followed by attacks on humans (nearly 30 per cent) and livestock (almost 20 per cent).

Elephants were involved in nearly 50 per cent if those incidents, followed by baboons and buffalos at 10 per cent. Zebras were responsible for seven per cent of the conflicts, while leopards, spotted hyenas and lions, the three most common large carnivores, jointly contributed to just over 16 per cent.

Much of the problem, said Adan, is that migratory species like elephants move across vast spaces, depending on weather and rainfall patterns.

Historically, elephants have moved from the Loita Hills to the Mau forest complex. But in recent years, settlements and farms have popped up along their traditional migratory corridors. And elephants, with their large appetites, end up feeding on the maize and other crops there.

"Automatically conflict begins as humans prevents the elephants from damaging the farms,” Adan said. “The people and the elephants are either injured or killed in the process.”

Adan said an effort is currently under way to identify which routes are still viable and can be revived to connect protected areas and reduce human-wildlife conflicts.

For now, the work put toward tapping natural springs and collecting rainwater has proven largely successful in reducing conflict by providing more water to both wildlife and human populations so they don’t have to compete for it.

Yet the project hasn’t been a silver bullet.

Over time, broken and eroded pipes have reduced the pressure and the volume of water reaching the village. As a result, the community’s access to water had to scale back from six to four hours a day, with some women forced to once again turn to rivers upstream for their water needs.

And while the conservation of these springs has provided the villages with a safer water source, Kirrokor said human-wildlife conflicts still occur.

"When we conserved the natural spring, we left some areas open for the wild animal's water access,” he said. “But they still follow humans to access water, as it's not enough, especially given [that] the area experiences high levels of drought.” 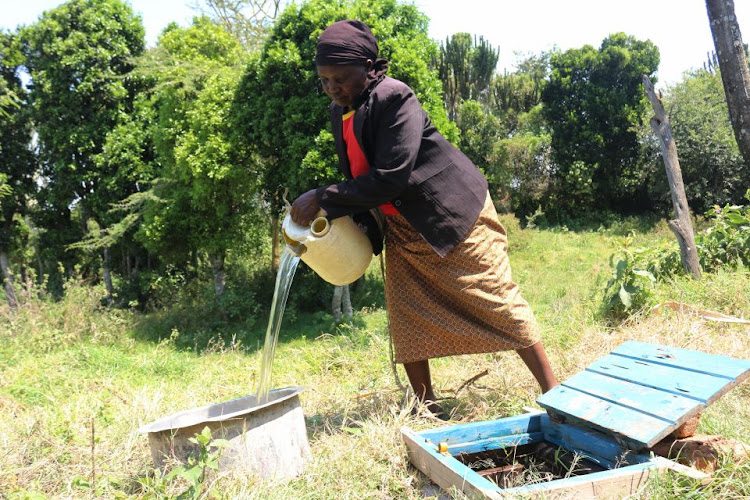 Kirrokor said he sees potential for the Nkolale water project to be replicated in other arid and semi-arid areas, where humans and wildlife battle over water resources.

What’s needed to make it successful, he said, is for communities to own and manage the project and see it as a solution to an immediate problem they collectively face. Finding a sustainable way to pay for the infrastructure through community water bills is also necessary, he said.

“We don’t have an effective way of collecting 100 per cent of the water bills from the water consumed,” Kirrokor said. “The challenge is that we used metal pipes that are eroding and have to be maintained.”

The community development organisation is currently working to implement prepaid payments to provide more steady revenue. Current infrastructure maintenance costs run between Sh30,000-40,000, which the community must pay for.

Kirrokor and the management have also been encouraging villagers to harvest rainwater and build small reservoirs to collect floodwater.

Esther Tuya is one resident who answered the appeal, using Sh18,000 of her savings to build a 13,000-litre underground water storage container. Her sons excavated the underground storage area themselves, reducing the total cost of the project.

The container is capable of sustaining her household for two years without a refill. She said this year she was blessed with plenty of rain, but she worries that future years won’t be as bountiful and she’s thankful she now has reserves of water.

"Nowadays we find such good rains after 19 years. From my observations, a drought always accompanies an excellent rainy season,” Tuya said.

Sanoe said despite the reduction in water volumes from the pipes in her village, she is still grateful that she hasn’t had to return to river collection.

“We no longer have to compete with the wild animals for it, and the best thing of all is the reduced diseases among our children. The water is not as much as it was at the beginning, but my household has learned to adjust,” she said. “I hope there will not come a day where our only source is the river again.”