• When the lockdown crushed her businesses in April, Njeri had to quickly think of something else, lest her big family starves 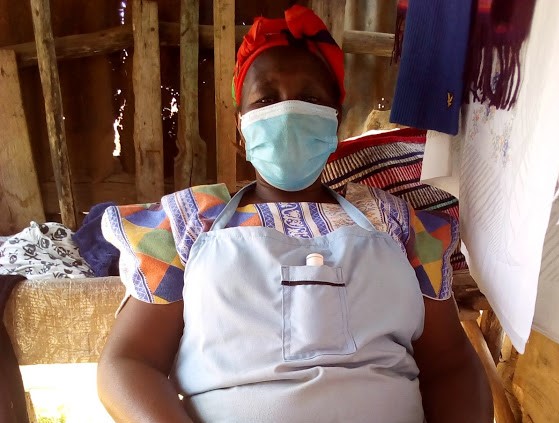 Trader Hannah Ngugi, 56, at her stall in Kahawa West, Nairobi. She used to own an eatery but corona has reduced her to selling vegetables.
Image: JOHN MUCHANGI

Hannah Ngugi, 56, has operated a small eatery at her neighbourhood in Jua Kali, Kahawa West, since 2010.

“Before the coronavirus came, business was good. I could support myself and my family and even pay rent for the premises without failing. But after March, everything worsened," she says.

Before March, she would make Sh2,000 a day after deducting all expenses.

But on March 24, when Covid-19 cases in Kenya had reached 15, Health CS Mutahi Kagwe ordered all bars shut, while restaurants were to remain open but only offer takeaway services.

He said the two were likely to be Covid-19 hotspots.

"My customers believed my place of work was infected with corona,” she says.

Clients also used to invite her to their homes for paid catering jobs, but this quickly stopped. “Everyone was staying indoors. I didn’t want to take coronavirus to my clients.”

The situation worsened on July 6, when the government allowed movement in and out of the Nairobi Metropolitan Area, and more people fled the city to their villages.

"That meant I lost many customers. Compounded with the mass exodus is people losing jobs. Many of the working class who lost jobs also started their own small businesses for survival, so I barely had any customers," Hanna explains.

The Survey on Socio Economic Impact of Covid-19 on Households, which KNBS released on July 9, shows the pandemic rendered 50.1 per cent of working women jobless.

Many of them were pushed into poverty, which is heavily feminised in Kenya.

"The Covid-19 pandemic will exacerbate poverty, especially among female-headed households, who constitute (30.2 per cent) of the poor population," says the United Nations Development Programme in a policy brief released in April.

The 2015-16 Kenya Integrated Household Survey results show 30.2 per cent of female-headed households are poor compared to 26 per cent of their male counterparts.

Although the economy is slowly rebounding after most restrictions were lifted, the Parliamentary Budget Office says it will not stabilise this year.

In its half-year economic update to Parliament, the office concludes that the situation will only improve if the pandemic doesn’t worsen.

“The phased reopening of the economy, as was from early July, could improve the performance of some sectors, albeit slowly,” PBO says.

The World Bank advises informal workers like Hannah should be supported to restart their lives.

“Supporting small businesses and protecting jobs to cope with the negative effects of the Covid-19 crisis is particularly critical at this time,” says Peter Chacha, WB senior economist and lead author of the bank's  report on the economic impacts of the pandemic: Kenya’s Tough Balancing Act: Protecting Lives and Livelihoods in the Time of Covid-19.

Early May, Labour CS Simon Chelugui said they had identified 352,943 vulnerable individuals, most of them women, who would receive a monthly allowance of Sh5,000 each for three months to cushion them from the harsh financial effects of the pandemic.

However, she couldn’t idle at home and has since opened a makeshift open stall, where she sells vegetables, such as sukuma wiki (kales), cabbage, spinaches and fruits.

But she is barely making ends meet.

"It’s now 12pm, and so far into the day, I haven’t even made Sh100. Sometimes I’m forced to discard sukuma wiki because they go stale when people don’t buy,” she says.

Hannah operates besides a dusty road opposite the gate of Vendramin Educational Centre (which is closed) in Jua Kali, Kahawa West.

“My daughter used to work at Vendramin, but she was laid off due to impacts of the coronavirus. The owner of this plot where I operate knows me and these other traders lining the road. He is happy because we help keep land grabbers away.”

Hannah's husband died in 2002, leaving behind a small piece of land.

Most of them live in the two-room house that Hannah's late husband built.

Hannah’s face lights up when she recalls how, at the beginning of the pandemic, the local church used to supply her and other poor people in Jua Kali area with food.

“The church could give us something to eat, but that didn’t last long, as people stopped going to church and hence the church no longer received offerings,” she says. Njeri Ng’ang’a, 78, displays some of her beadwork at her stall in Kahawa West, Nairobi. She has learnt to be resilient.
Image: JOHN MUCHANGI

Next to Hannah's stall is a dusty path that leads to Njeri Ng’ang’a’s business.

“Before March, 2020, things used to be good. All my life I’ve been a businesswoman. I once sold scrap metal and used the earnings to buy the plot where I built my house," she says.

"I started selling bedsheets in 1990, and before corona, I could hawk my bed sheets as far as the Thika Superhighway. I used to make money back then, but when corona happened, I couldn’t wander around as I used to. People would not want to approach me because they feared I carried coronavirus germs in my bedsheets."

When the lockdown crushed her businesses in April, she had to quickly think of something else lest her family starves.

She planted sukuma wiki and arrowroots at the small space outside her home.

“I sell my baskets for around Sh1,500 each, the small keyholders go for Sh50 and the big ones Sh100. I sell the table mats at Sh200. But due to the bad business, I was forced to lower the prices; otherwise, nobody would buy at the normal price.”

Njeri, too, has a big family to take care of. Her husband died in 1999, leaving behind eight children and some grandchildren.

“My children, most of whom do not have regular jobs, have their own children. And I have to help bring them up,” she says.

With some at it for years, struggles with rent and food are nothing new
News
2 years ago

Some of the children live in her two-roomed house. Njeri admits if she had been living in a rental house, she would have been unable to raise rent.

The KNBS household survey showed that almost 30.9 per cent of tenants who usually paid rent promptly before the pandemic were unable to pay on time in May.

She last received the government’s cash transfer to the elderly in June and has already spent all of it. Beneficiaries are paid Sh4,000 every two months.

Her customers, even in their low numbers, seem to buy the detergent more than the beaded items and vegetables.

Why Covid-19 will hit women harder

Women often face the choice of giving up paid work to care for children at home
News
2 years ago
by JOHN MUCHANGI Science Editor
Lifestyle
11 September 2020 - 07:00