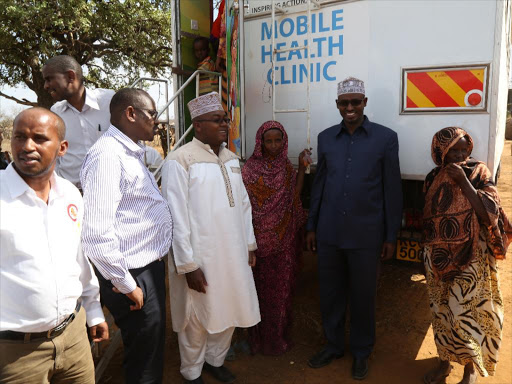 Speaking last year, First Lady Margaret Kenyatta said, “One death in giving life, will always be one death too many”, yet around 830 women die from pregnancy and childbirth related causes in the world every day.

While the global maternal mortality rate has been decreasing at a rate of 2.3 per cent, it is still less than half of the 5.5 per cent needed to achieve the three-quarter reduction required of the WHO sustainability goal.

Africa has been showing a substantial reduction in maternal and child mortality, however, a list published by in 2015 showed it is progressing slower than other regions and contains 25 of the 30 lowest ranked countries to give birth in.

Despite this, there are disparities between counties, as while some show ratios in accordance to the national average, others are significantly higher.

ranked Mandera as the worst county in Kenya to give birth. According to the report, the maternal mortality rate was 3,795 per 100,000 live births. This means that at least 10 women die every day in that county due to birth related complications.

These can be attributed to differences in income, education and the fact that many women in these higher rated counties live beyond the reach of adequate health facilities.

Only half of mothers residing in rural areas received skilled care or delivered in a health facilities compared to 82 per cent of those living in urban areas.

Furthermore, only a quarter of uneducated women received skilled care compared to 85 per cent of mothers with secondary or higher education.

Tragically, more than 75 per cent of maternal deaths in Kenya are preventable. Many of these women die from treatable complications such as infections, high blood pressure disorders such as pre-eclampsia, complications from delivery and unsafe abortions.

In 2016, the Reproductive Maternal Neonatal Child and Adolescent Health (RMNCAH) investment for Kenya was released.

Its purpose was to “envision a Kenya where there are no preventable deaths of women, newborns or children, and preventable stillbirths; where every pregnancy is wanted, every birth celebrated and accounted for and where women, babies, children, and adolescents are free of HIV/AIDS, survive, thrive and reach their full socio economic potential.”

Maternal health as a top priority

In it, Dr Nicholas Muragiri wrote that there were too many incidences of women, children and adolescents dying from preventable conditions saying that access to RMNCAH services remained a challenge across all levels of care.

He added that improving this, particularly regarding maternal and child health should be a top priority for the Kenyan government.

The framework which was the outcome of a MoH led consultative process with counties, MoH departments and relevant government entities suggested a prioritised set of interventions to be applied over the next five years.

It claimed that the implementation of the framework would help achieve their targets by improving coverage for key indicators.

These include increasing skilled deliveries by 87 per cent, antenatal care by 69 per cent, full immunization to 76 per cent, contraceptive use to 73 per cent and pregnant women tested for HIV and post-test counselling to 75 per cent, all by 2020.

To achieve these goals, the framework suggested key strategies that needed increased investments.

One of these is was to address disparities and increase coverage through prioritising underserved counties and marginalized populations.

An example of this is that while 73 pregnant women in Nairobi have over four antenatal visits those in West Pokot only had 18.

Similarly, 93 per cent of women in Nairobi had a facility delivery compared to only 26 per cent in West Pokot.

The framework’s objective is to use

high impact interventions to address the main causes of maternal mortality in Kenya which are haemorrhage (25 per cent), hypertensive disorders (16 per cent), sepsis (10 per cent), obstructed labour, abortion complications and other indirect causes.

These are strategies and immediate actions to address these causes, for example in the case of haemorrhage, high impact interventions would include blood transfusions and uterotonics, an agent used to induce labor and reduce postpartum hemorrhage.

For hypertension, another leading cause of maternal death, interventions recommended include provision of magnesium sulfate (anti-seizure medication that is given to pregnant women diagnosed with pre-eclampsia), anti-hypertensives

In addition to these, enhancing the quality of services to accurately diagnose, adhere to clinical guidelines and have the skills to manage maternal and newborn complications were key.

Providers must accurately diagnose complications according to clinical guidelines. However, the report suggests that provider skills and competencies to manage obstetric complications were limited.

For postpartum haemorrhage, less than half of the checklist items were completed by public providers with only 44 percent taking the correct action for treatment.

Furthermore, only three quarters of providers mentioned uterine palpitations and the introduction of an intravenous line to manage obstetric haemorrhage while less that half mentioned starting an oxytocin drip.

Improving these services would not only decrease maternal mortality, but would also enhance the public trust meaning more expectant mothers would choose facility births.

The Maternal Death Surveillance and Response (MDSR) committee would identify and register maternal deaths and support the appropriate actions needed to implement prevention.

Ran by the government through the Ministry of Health, the committee will aim to scale up the training of emergency obstetrics and newborn care countrywide, eliminate user fees for maternity services through the maternity service initiative and institute maternal and perinatal death surveillance and response mechanisms.

Unreliable data on maternal deaths contributes to a lack of accountability which limits the ability to make future decisions to improve mortality rates.

This month, USAID released their 2017 Acting on the Call which looked at ending preventable child and maternal deaths through providing basic and comprehensive obstetrics and newborn care in 17 out of the 47 counties; provided maternal child health equipment in 22 counties, trained 2,500 health workers in commodity management and 10,000 health workers in quality counselling and service provision.

Other interventions to reduce maternal mortality rate include the Beyond Zero campaign launched by the First Lady.

Beyond zero is an initiative of Margaret who along with various partners aims to bring high visibility and accelerate interventions on the promotion of maternal, neonatal and child health.

To date, the organisation has mobilised 47 fully kitted mobile clinics across the county in an effort to address the challenges of quality and access to health services.

During this year’s Beyond Zero 2017 summit, Margaret celebrated the impact the project had made in reducing the maternal mortality rate.

The event was attended by among others, Health CS Cleopa Kilonzo Mailu, USAID country director Jacobi Jantine and a number of policy makers.

In the four years since its conception, maternal mortality has dropped from 6,000 a year to 4,000.

She also gave awards to different counties on achievements made, including Mandera who were appreciated for its efforts towards improving infrastructure to support access to maternity services, increasing referral hospitals from one to three and constructing new modern maternity wards

Speaking at the summit, the first lady congratulated everyone who had contributed to the initiative and acknowledged that there was still a lot of work that needed to be done in Kenya.

She said, “The race is not over. There are still mothers to help and children to save. We have to keep going until the ideal of ‘zero’ preventable deaths become a reality. We have done so much and I am confident that we can do more.”