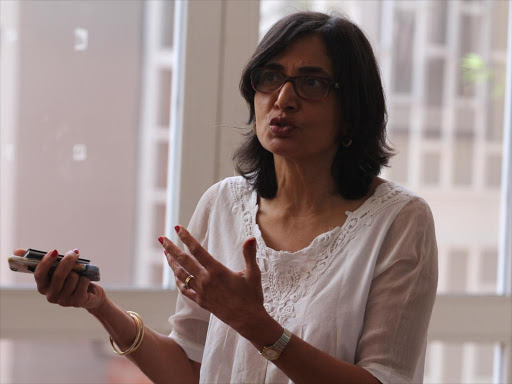 Shaira Adamali, Founding Trustee addressing the members of the press at the press conference of the launch of Faraja Medical Fund. /COURTESY

Faraja Cancer Support Trust on Tuesday announced the launch of an innovative health fund that will pay for cancer treatments for selected low income Kenyans in perpetuity.

The health fund is designed to be a growing fund with an initial amount of Sh100 million, which will be invested with some of Kenya’s leading fund managers.

Treatment will be provided for at least 50 patients annually, forever and it will be financed from the Fund’s invested income.

Speaking at the launch Shaira Adamali, Founding Trustee of Faraja, said fundraising for the fund is underway and they've already managed to get Sh60 million.

"The money we've raised so far has come from a variety of activities including Charity bike rides which contributed Sh25 million of the Sh60 million, “Let’s Fight This Battle Together” campaign in partnership with Nakumatt where shoppers contributed five million shillings and two to three major donors who basically topped up the remaining amount," she said.

Andrew Hollas, chairman Faraja Trustees, said the most part of the fund is raised locally and if the 100 million shillings target is exceeded then the trust will also increase the number of patients to be supported.

"It is important to note that vast part of the fund is raised locally and if at all there is any foreign contribution it is because of the good connection they have with Kenya," Hollas said.

"We want to be sustainable for years and years to come, if in fact we become dependent on foreign donors then we can't ensure that sustainability," he added.

Over the past 2 years, Faraja has run a pilot project to offer grants to adults and children in desperate need of life-saving medical treatments, such as chemotherapy and radiation. The project has to date successfully helped at least 60 adults and children suffering from the disease.

Shaira Adamali said: “our pilot project was not only very effective in showing the need for sustainable financial intervention to help treat cancer but also ended up stigma-busting the fact that cancer is a death sentence in Kenya."

Adamali also raised concern over the NHIF cancer cover saying that it was not available in all hospitals and the funding provided by the cover was not enough.

"The NHIF cover has increased positive outcome but it's however not enough. It does not cover the whole radiation amount and Radio therapy is not supported in all hospitals. The other thing is that most of the centres providing are in Nairobi hence patients still have to travel to the city for treatment."

She also said machines are also taking too long to be transported and installed in different hospitals across the country therefore inconveniencing the patients.

Adamali encouraged people to go for screening to help in early detection of the disease.

“Late diagnosis and long waiting times, continue to contribute to cancer mortality in Kenya. We advocate for regular screening, as there’s a clear link between early diagnosis and higher chances of survival. It can be cheaper to treat early stage, as opposed to late stage, cancer.

In Kenya, one out of three people will get cancer and one in every 10 children will survive – compared to 7 out of 10 in developed markets. The annual cancer mortality rate in Kenya is 27,000 and cancer cases are increasing everyday.

Out of a population of 43 million people, there are only 14 oncologists.