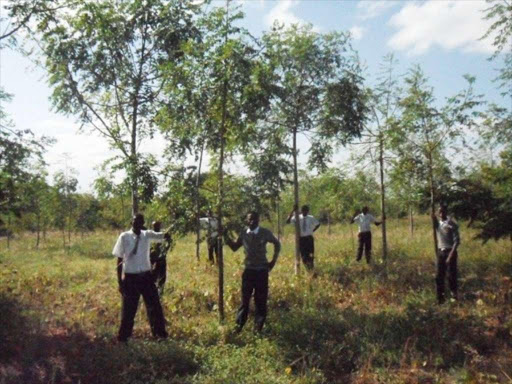 Some of St. Martin Kaewa Secondary School pose next to ‘Melia volkensii’ (Mukau) at the school

The need to train young people on conservation has never been more urgent, especially in the face of a changing climate.

One project project has now taken up this challenge

It is designed as a challenge for schools in dry areas, which are awarded based on the survival rate of trees they plant and the use of innovation in conservation.

The best schools benefit from scholarships, infrastructural developments, water tanks and cash rewards among others.

The first phase started in 2013 involved 81 schools near the seven folks power stations in Embu and Machakos counties.

Each school was provided with 150 trees for economic use and 50 wood trees for fuel. They also planted multipurpose Cassia siamea (Muveshi) and Melia volkensii (Mukau) seedlings in their school plots.

“We choose school kids because they will be our conservation ambassadors in future,” says Anthony Igecha, Kengen Foundation senior programmes officer.

Igecha says the challenge has stirred enthusiasm in children because they come from areas where charcoal burning is the main economic activity.

“By sponsoring this trip to Mombasa, we want to motivate the students to proactively conserve the environment, not only in their schools but also around their communities,” says Susan Maingi, Bamburi Cement director of corporate affairs.

Lafarge Eco Systems, a product of the cement company, who manage the Haller Park and Forest Trails, says they have more than 430 trees species.

Eco-systems and tourism manager Albert Musando says they teach children how such trees clean the air by absorbing carbon dioxide and other gases, hence mitigating the effects of climate change.

“This is a culture change campaign to make the children appreciate the environment. When they grow and start working, they understand that industries should drive activities with respect to environment,” Musando said.

He says that without rehabilitation, the quarries would have become dump-sites and a health hazard.

This phase targets 919 schools in next ten years and will include Kitui County. A total of 120 schools will take part in the challenge every year, with each county producing 40 schools.

The economic tree, Melia volkensii (Mukau), can be harvested after 16 years and fetch at least Sh10,000.

Mukau comes in handy for the schools. The wood tree can be used as firewood to prepare meals, consequently reducing deforestation.

Peninah Mbaluka, travelled with St Martins' students to Mombasa, representing the district education officer in charge of the project in Masinga and Machakos sub-counties. She says the project has changed the attitude of students towards conservation.

“When I joined the school in form one, we were planting trees as a punishment but now we do it passionately,” says a form four student, Daniel Ngila. He was made the school environment prefect

in form three because of his conservation efforts.