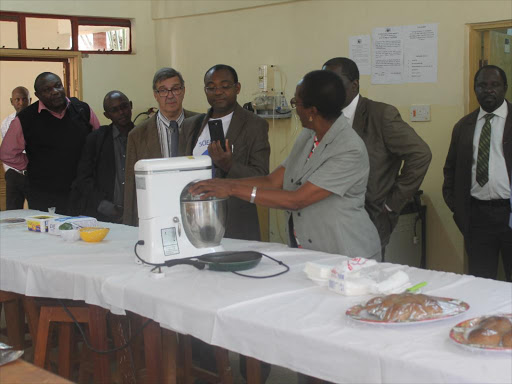 Jaramogi Oginga Odinga University of Science and Technology vice chancellor Prof Stephen Agong says the initiative, which kicked off in 2005, is cost effective. "Making the products requires small space while the insects are easily available and requires minimal labour to get them," Agong says.

He says one can harvest 10kg of cricket a month in a three by four metre cage.

"We want to scale up the production of cricket in the region and are seeking to partner with potential investors in future to industrialise the sector to make cakes, biscuits among other products in large quantities" Agong says.

He adds that once the project is sustainable, it will alleviate poverty, particularly among women, who can be engaged in production and harvesting of the insects.

“We want to involve women who will form women groups to supply the raw materials as we venture into sourcing for markets," Agong says.

He, however, admits that they face challenges ahead of the project, saying the acceptability of the new technology by the community remains a tall order.

Agong says while the science of edible insects has been there, it has never been accepted in Kenya, especially among the younger generation.

“There is a decline of food production in Siaya county and yet Lake Victoria harbours plenty of nutritious insects including crickets, which haven't been tapped for consumption.”

Agong says crickets are rich in zinc and are a great immune booster, especially for young children and the sick.

“Due to its high nutritional value that comprises micro nutrients like zinc, it’s of great importance to the young children and immune booster especially for the sick. With the high death rate among infants in Siaya county due to malnutrition, crickets are a cheap way of addressing this deficiency.”

He says talks are ongoing between the university and the International Centre of Insect Physiology and Ecology to ensure that they produce standardised products devoid of harmful ingredients.

Prof Agong adds that the World Bank has injected Sh500 million over a period of five years to support research activities at the university’s African Centre of Excellence in Sustainable use of Food and Feed Insecticide.

She says they are currently in the process of formulating food for weaning infants.

Ayieko says that research findings have proved that infants who feed on edible insects tend to grow stronger and resistant to allergies unlike others who feed on normal or junk foods.

“Demand for the product is overwhelming. I am calling on the local community to seize the opportunity and venture into this business. Crickets do not produce odour like many other insects hence easy to rear and harvest,” she says.

Ayieko adds that the project is environment-friendly since the insects do no emit green house gases like some other insects.

She adds that they have also trained local women on how to harvest and rear crickets.

“The project has encountered challenges including rejection by some locals who do not believe in eating insects,” Ayieko says. "This is despite the fact that the Luo community used to insects in the past."

The university is partnering with the research arm of the Inter Cricket of Africa, Maseno University, Busoga and Jomo Kenyatta University of Science and Technology. Other partners include TCCO, an international NGO based in the Netherlands and CIDA.

She adds that the major funders are a consortium of 12 institutions based in Thailand, US, Denmark, South Africa, Kenya, Zimbabwe and Uganda among other countries.

“Our research won the global event and was given the nod to go beyond regional research activities. We have been approved by World Bank to operate in 10 countries in East and Central Africa in the next four years,” Ayieko says.

She says they seek to work closely with farmers and PhD students during the project timelines.