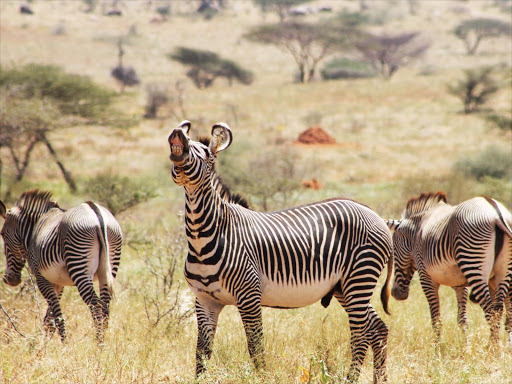 While animals such as rhinos and elephants are hunted for their horns, they are not the only animals that are endangered.

Meet the Grevy's Zebra. It is one of the largest and most threatened of the three species of zebra, the other two being the plains zebra and the mountain zebra.

Less than 2,800 Grevy’s zebras exist in the wild, and more than 90 per cent of the total population is found in Kenya.

In order to determine the number of individuals and the population’s health, a large scale census is required.

That census finally took place last weekend, and was as rare as it was of the essence. It was organised by members of Kenya’s Grevy’s Zebra Technical Committee and was dubbed the Great Grevy’s Rally (GGR).

The committee had invited eager and adventurous members of the public – citizen scientists – to participate in the unique event that would raise awareness and contribute to the conservation of these species.

The teams drove through several conservancies last Saturday and Sunday and photographed every Grevy’s zebra they observed, in Isiolo, Samburu and Marsabit counties, where the zebras live.

Each Grevy’s zebra has a unique stripe pattern and that pattern was what was used to capture information using a camera.

Those photographs are currently being processed using the Image Based Ecological Information System (IBEIS) software, which will allow scientists to estimate the size and health of the Grevy’s zebras population. Results are expected early next month.

These zebra's population has plummeted from an estimated 15,000 in the early 1980s to the estimated 2,500 left in Kenya today. A few others reside in Ethiopia.

“Grevy's zebras are an endangered species and special care has to be given to them. With this rally we will be able to know if their population is decreasing, stable or increasing. Taking care of these species has its own challenges. Community awareness is one thing that should be practiced. With cattle grazing on the same land as the zebras, they tend to limit to the resources especially grass and water,” says Prof Daniel Rubenstein of Princeton University. Prof Rubenstein is one of the world's leading authorities on the Grevy's.

“By controlling the cattle, the zebras also get the chance to eat and drink. Educating the community on the importance of coexistence helps them understand that the zebras also need care. Because this are the same people who are helping in the in the tallying of the zebras," he said.

Conservation efforts have significantly increased. Community-led conservation has been particularly successful through the establishment of a growing number of community conservancies.

They help communities in diversifying their economic base through wildlife-based income such as tourism and game bird hunting. In addition, alternative enterprises such as aloe harvesting are currently being explored.

"This rally is very important to the environment and the community. With different people participating in this operation, we help them understand more about the endangered species. We are enabling them to be part of conservation and helping them understand what comes with it," said WildlifeDirect director and activist, Dr Paula Kahumbu.

“Conservation requires total dedication. Conservancies and reserves do so much to keep these species safe. But alot of support is needed to help them carry on with the reservation. The government, community, students and scientists all play an important role to this kind of operation.”

Kahumbu said Kenya has enormous national and global responsibility to ensure that this species is protected.

Godec said Such an operation connects people to science and wildlife.

"I think the great grevy's rally is an important operation and its been great on the first day. With 119 teams going round collecting the information, we are hoping for better results. The grevy's Zebras are endangered species and with this rally, we can actually get an estimate of how many are left and get to also know if their population is increasing or decreasing. When we get the results, it will help protect them going forward,” he said..

Grevy’s zebra has undergone one of the most substantial reductions of range of African mammals, and is found today in only two range states: Kenya and Ethiopia. The species has undergone significant decline in numbers and range has been a major concern to stakeholders in Grevy’s zebra conservation.

Post a comment
WATCH: The latest videos from the Star
by TRACY MUTINDA
Lifestyle
05 February 2016 - 06:00
Read The E-Paper