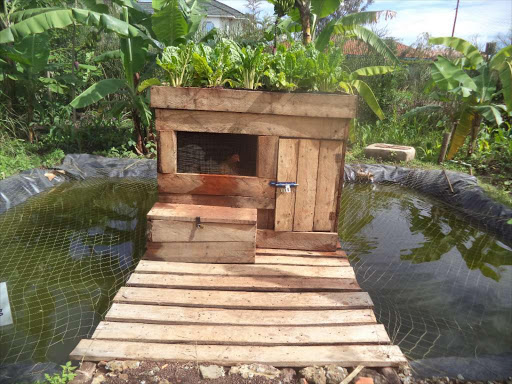 Integrated agriculture with a chicken cage, fish pond and a vegetable garden.

A 10 by 10 feet plot can no doubt feed a small family, and still earn enough to pay school fees.

One does not also have to soil the hands or toil very hard throughout the day, as this venture requires a maximum of five minutes per day.

The project can earn a farmer an average of Sh1,400, enough to buy maize flour and other staple food.

The same plot will also provide vegetables and enough proteins for the family, all at a total cost of production not exceeding Sh200 per month.

“The venture is called Integrated Aquaculture farming, where a farmer can rear fish, chicken and plant vegetables in the small plot. All a farmer needs is to properly feed the chicken,” says Peter Chege, an agricultural programme officer with Resources Oriented Development Initiative-Kenya.

The chicken cage, measuring three by three feet, is constructed at the centre of the fishpond, with a timber bridge to connect it to the land, while the flourishing vegetables are planted at the roof of the cage.

This space holds about 20 spinach plants, which are intercropped with some few onions which help in insect and pest control, without affecting the spinach.

Simon Munyua, in-charge of the farm at the Institute for Sustainable Development and Crime Prevention Centre in Ruiru where the project was first implemented, earns Sh200 every week from the 20 plants, harvesting twice per week.

“Other than using water from the fishpond, we do not apply any fertilisers or chemicals on the vegetables. Besides selling, we also use the spinach to feed the fish,” Munyua said.

He says the water from the fishpond has enough nitrogen and other nutritional requirements for the vegetables.

The facility is a training centre for ex-prisoners under RODI-Kenya rehabilitation programme and other members of the community.

They keep two layers and a cock — all traditional breeds — which produce about 10 eggs per week, with an egg retailing at Sh15.

The pond holds an average of 150 tilapia fish, which mature between six and eight months. A tilapia retails at a minimum of Sh250, thus earning a farmer Sh37,500 within the period.

“You don’t have to feed the fish, chicken droppings and their leftovers are enough to feed the fish. Adding other feeds contaminates the water, making it thick hence reducing oxygen in the pond. Some feeds will rot and ferment at the bottom of the pond as well as encourage over development of algae,” says Chege.

He adds that having more chicken in the system is also not recommended as they will require more feeds which the fish cannot consume.

Chege says a farmer can also plant sweet potatoes or vegetables around the pond, which will translate to more income at no extra costs of production.

“We introduced the technology in September last year. Farmers must stop complaining about land scarcity and embrace modern farming technologies; that’s the only way to guarantee food security at family and national levels. This venture does not require a lot of time giving a farmer enough time to engage in other businesses,” Chege said.

“A farmer can design a bigger pond depending on size of land. Ours was basically designed for training purposes considering economic and social status of our target beneficiaries who are primarily ex-prisoners, low income earners especially in informal settlements and small-scale farmers.”