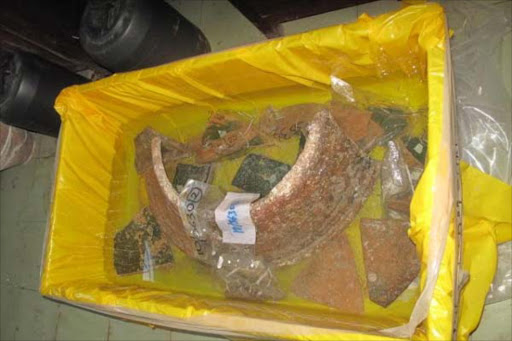 Artifacts from Ngomeni shipwreck in conservation in Mombasa

The National Museums of Kenya (NMK) has now concluded that the Ngomeni shipwreck is of Portuguese origin.

The ship is approximated to have made its last ill-fated journey in the Indian Ocean waters about 500 years ago, making it the oldest shipwreck in Kenya.

Ngomeni is located close to the shore, in shallow water and in a well-protected area in Ras Ngomeni within Kilifi county.

It is a few kilometres from Ngomeni village, which is accessible by all-weather road from Malindi.

Though it sank earlier than Santa Antonio shipwreck in Mombasa, the Ngomeni ship has most of its major components including timbers (frames, ribs and the base) still intact. These remains make the site ideal for an underwater museum.

Head of Coastal archeology Caesar Bita says the Ngomeni shipwreck was found to contain copper ingots with the Fugger emblem, similar to those recovered in a shipwreck in Oranjemund, Namibia.

“The Namibia shipwreck has been fully been identified as Portuguese. Provisional dates from analysis of artifacts collected, place the site at 15th – 16th centuries AD. This is also the period the Portuguese were dominant in this coast controlling the Western Indian Ocean trade.”

He observes that, provisionally, Ngomeni shipwreck is now the most ancient shipwreck site in Kenya.

Bita, who is the chief underwater archaeologist at NMK, says that they are yet to know how big the ship was.

“With only a small section of the Ngomeni shipwreck excavated, the size of the timber planks and extend of the site that covers 20m by 40m, it can be deduced that Ngomeni was a very large ship. It is only after excavation of the entire shipwreck and an artifact audit carried out, that it can be determined whether Ngomeni was larger or smaller than the Oranjemund one,” he says.

Bita, who is also the secretary of Africa committee underwater cultural heritage, told the Star that the ship will remain preserved under water, with a possibility of becoming an underwater museum.

“After the excavation the site was backfilled to be left in-situ for better preservation. Underwater objects preserve well under the water in the conditions that they have acclimatised, and also because in those conditions there is very little oxygen. However, they will deteriorate very fast once removed from the water. It is this condition of leaving the objects preserved underwater that is referred to in-situ preservation. So, our Ngomeni site is in-situ preserved.”

The archeologist says that the site has not been excavated fully and plans are underway to uncover the entire site and fully explore its potential including research and tourism.

He notes that samples of the materials from the shipwreck, including stones, sand, wood, water, and metals, have already been taken for analysis at the government chemist, University of Nairobi Nuclear Science department and Mines and Geology department. “All recovered artifacts were taken to Fort Jesus Museum conservation laboratory for further analysis and preservation.”

According to marine archeologist Hans-Martin Sommer, there map be numerous Portuguese shipwrecks at the Kenyan coast. “We know from old chronicles and reports that numerous ships wrecked in Mombasa and Malindi. Sometimes it was navigation errors or insufficient nautical charts. In other falls ships got rotten by the attack of the Teredo worm. But also fights led to thesinking of ships,” he says in his 2007 paper Portuguese Shipwrecks at the Kenyan Coast, published by the National museums.

Bita notes that so far, they are continuing with excavation to expose the current site, at the same time studying the collections to ensure they get all the necessary information.

He says that there is regular monitoring of the site to check its status of preservation and security.

The archeologist say that they are currently working on photo mosaics to show the complete ship.

“During excavation of Ngomeni, we undertake underwater photography and lots of images of the different parts of the shipwreck site have been collected. We are joining these photos respectively to develop one complete photo of the ship. This photo mosaic and can be made and developed into temporary photographic exhibitions,” he said.

In addition, the archaeologist intimates that underwater cultural heritage is part of the universal heritage of humanity and significantly deserves the same protection as all other cultural assets.

Bita reveals that one major challenge is the lack of trained underwater archaeologists in the country to fully take part in the study of Ngomeni Shipwreck.

Kenya has only Bita and his colleague Phillip Wanyama.